Update for testing - in particular, what is the sensitivity of the tests at different points in the infection cycle, after exposure. How many days after exposure is the test more reliable?

There are three main categories of tests for SARS-CoV-2: Reverse-Transcriptase Polymerase Chain Reaction (RT-PCR), detection of antibodies to SARS-CoV-2, and Rapid Point of Care (POC) testing.

Quantitative Reverse-Transcriptase PCR (qRT-PCR) is the most commonly used diagnostic method, and requires either a nasopharyngeal swab, throat swab, or saliva sample containing the virus. Depending on the manufacturer of the testing kit, the DNA primer targets one or more different genes in SARS-CoV-2, such as env, N, S, RdRp, and ORF1. One comparative study looked at the relative sensitivities of different primer probes and found that most of the primer probes had satisfactory sensitivities (CDC N1, CDC N2, CDC N3, Corman E-gene assays), while the Corman RdRp (i.e. Charité probe) had lower sensitivity.[3]

Reverse transcriptase transcribes the RNA from SARS-CoV-2 in the sample into cDNA, which is then copied into new DNA strands by Taq polymerase, which has 5’-3’ exonuclease activity that indirectly activates a fluorescent probe. The cycle threshold (Ct) is the number of PCR cycles to produce a visible fluorescence; clinically, a Ct value < 40 is considered PCR positive.[1] Note that a positive result does not necessarily indicate the presence of an active, viable virus as it only detects the presence of viral RNA; infection status and management plan should be determined using testing in conjunction with clinical history.[9]

There is limited data on viral load or positive tests in presymptomatic/asymptomatic patients. Of note, a study by Pan et. al reported that 2 of 2 asymptomatic patients tested positive one day prior to the onset of symptoms. However, the small sample size minimizes the significance of this finding.

As illustrated in Figure 1, for most symptomatic patients, the highest viral load occurs within the first week of symptom onset, so RT-PCR can detect positives as early as day one of symptom onset.[1] This diagnostic probability then declines by week 3, and then becomes undetectable. Note that severely ill COVID-19 patients will have higher viral loads (lower Ct values) than mildly ill patients; beyond week 3, PCR may still detect positives in severely ill patients but will return negative results in mildly ill patients.[2] 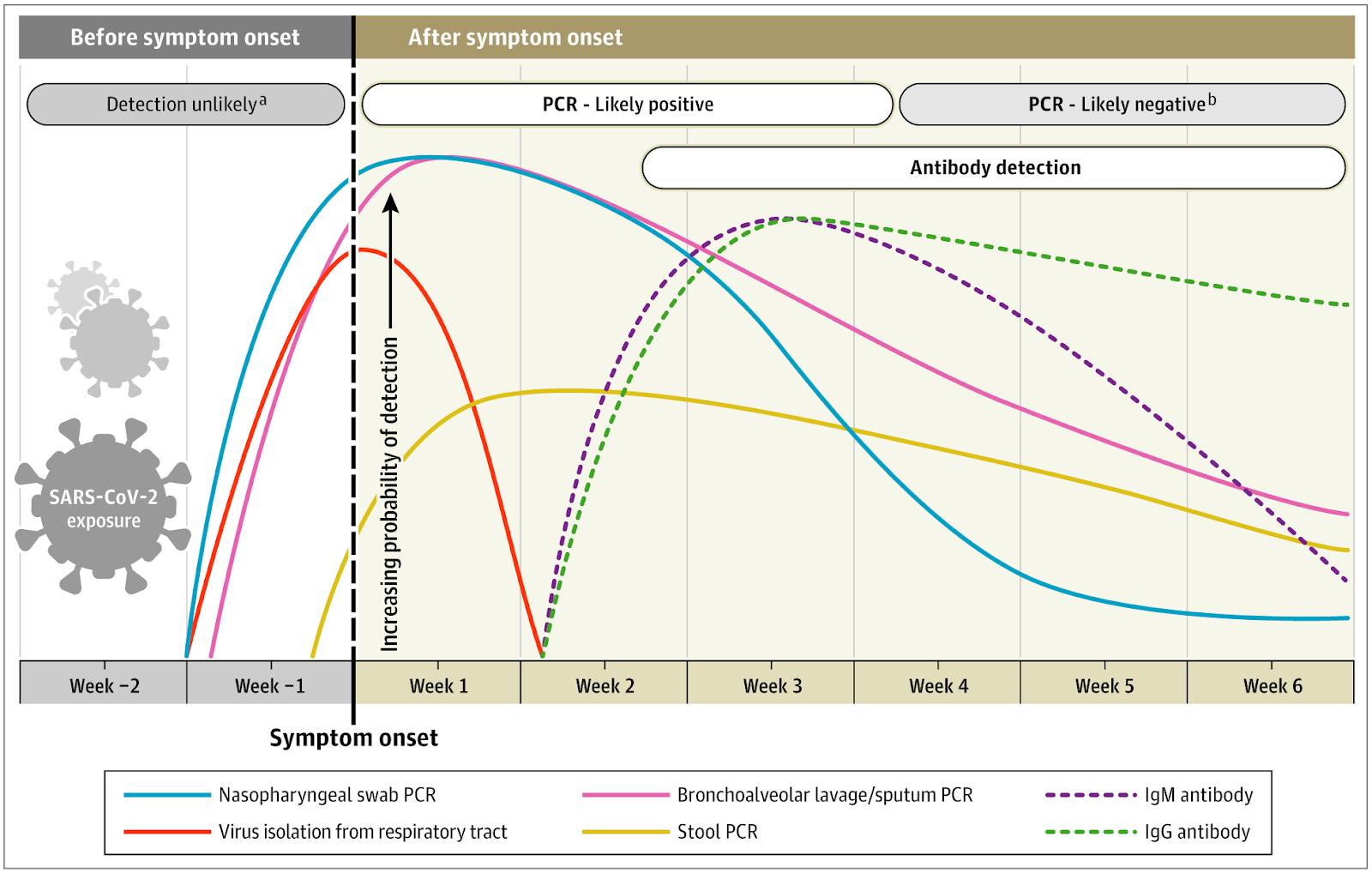 Variation in Diagnostic Probability Relative to Time After Symptom Onset[1]

Diagnostic probability is also dependent on the type of sample used for diagnosis. In one study of 76 confirmed COVID-19 patients, sputum was found to have a significantly higher viral load than either nasal or throat samples.[4] Recently, it was found that nasopharyngeal swabs are significantly more sensitive and are able to detect SARS-CoV-2 longer than oropharyngeal swabs.[11] 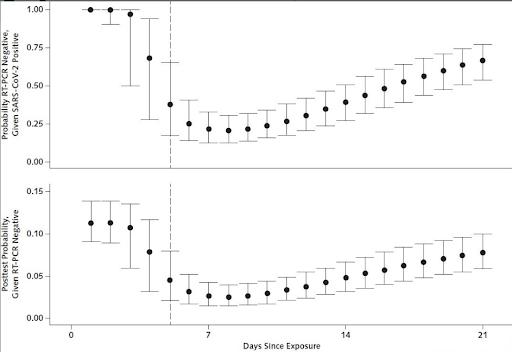 Detection of Antibodies to SARS-CoV-2

ELISA serological testing is most viable for mildly-moderately ill patients who present beyond the first two weeks of onset of symptoms, and may have recovered from their illness. A study of 173 patients with COVID-19 found that by the 15th day since onset of symptoms, the seroconversion rate for Ab (total antibodies), IgM, and IgG was 100%, 94.3%, and 79.8% of patients. The median seroconversion time after onset of symptoms for Ab, IgM, and IgG were day 11, day 12 and day 14, respectively.[12] In two other studies of 23 and 85 patients, IgM and IgG seroconversion took place in 100% of patients during the third and fourth weeks after onset of symptoms.7,12 As illustrated in Figure 1, IgM declines to a lower level by week 5 and disappears by week 7, whereas IgG persists past week 7.[13]

Antibody tests for the NC (nucleocapsid) antigen will have the highest sensitivity because the majority of antibodies will be produced against NC, as it is the most abundant antigen.[1] Antibody tests for the RBD-S (receptor-binding domain of S) will have the highest specificity because RBD-S is the host-binding protein.[1] Using one or both antigens for detecting IgM and IgG will result in high diagnostic accuracy.[13]

The specificity for IgM and IgG is > 95% for diagnosis of COVID-19. However, given the high number of samples tested and relatively low prevalence of infection, this specificity results in a high false positive rate, estimated to approximately half of all positive tests. As a result, the clinical value of antibody tests is uncertain and routine testing is not recommended. Ideally, a SARS-CoV-2 specific protein should be used in immunoassays to reduce false positives resulting from cross reactivity with SARS-CoV and other coronaviruses. For example, the S1 subunit is highly specific to SARS-CoV-2 and the RBD-S protein shows far less cross reactivity with SARS-CoV and other coronavirus strains.[14]

An initial quantitative RT-PCR with a subsequent IgM ELISA two weeks later significantly improves the sensitivity of pathogenic diagnosis of COVID-19 (p< 0.001).[12] In a study of 140 patients, the combined sensitivity of the initial RT-PCR and a IgM ELISA for NC was 98.6% vs 51.9% with a single RT-PCR test; PCR had a higher positivity rate than IgM ELISA in the first 5.5 days after symptom onset, but IgM ELISA had a higher positivity rate after 5.5 days.[1][13]

Serological diagnosis can be used to identify individuals with prior COVID19 infection who may have gained immunity to COVID-19; however, the duration of potential immunity in asymptomatic and symptomatic infected individuals is currently unknown.[1]

Due to a lack of research, the WHO currently does not recommend use of rapid point of care tests for clinical decision making until rigorous evidence on their reliability is available, but states that they may only be used for research purposes.[15] This rapid POC test directly detects the viral antigen from a respiratory tract sample and generates a visual signal within 30 min. However, this test is simply qualitative and its sensitivity is expected to vary widely, between 34% and 80%. Cross-reactivity with other coronaviruses is possible, generating false positives and reducing its specificity; further research is necessary in this area.

The FDA has issued an emergency use authorization for Cepheid/s Xpert Xpress SARS-CoV-2 test, which can return a diagnosis in 45 minutes. A study of 483 patient samples tested for SARS-CoV-2 using both standard of care nucleic acid amplification test and the Xpert Xpress SARS-CoV-2 test. The test had cross-reactivity with SARS-CoV, but was reported to be distinguishable from SARS-CoV-2. The positive agreement was 99.5% and the negative agreement was 95.8%.[16] However, additional research is needed to confirm the sensitivity and specificity of this test, especially throughout the course of infection.

The following table from the Annals of Internal Medicine synthesizes the selected use cases for different diagnostic tests. Although point of care (POC) diagnostics are included in the table, the general consensus of the scientific community is that there is insufficient evidence to confidently support the use of POC tests. 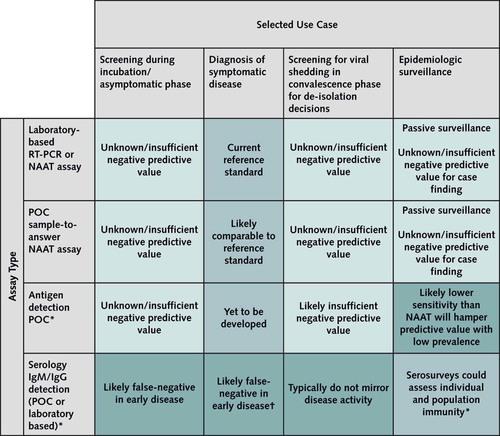 Further research on the appropriateness and sensitivity of all diagnostic tests of COVID19 is needed.

This summary was written as part of the CoRESPOND Earth 2.0 COVID-19 Rapid Response at UC San Diego. For more information about the project, please visit http://earth2-covid.ucsd.edu