Azerbaijan - a secular nation with a majority-Turkic and majority-Shia Muslim population - was briefly independent (from 1918 to 1920) following the collapse of the Russian Empire; it was subsequently incorporated into the Soviet Union for seven decades. Azerbaijan remains involved in the protracted Nagorno-Karabakh conflict with Armenia. Nagorno-Karabakh was a primarily ethnic Armenian region that Moscow recognized in 1923 as an autonomous oblast within Soviet Azerbaijan. In the late Soviet period, a separatist movement developed which sought to end Azerbaijani control over the region. Fighting over Nagorno-Karabakh began in 1988 and escalated after Armenia and Azerbaijan attained independence from the Soviet Union in 1991. By the time a ceasefire took effect in May 1994, separatists, with Armenian support, controlled Nagorno‑Karabakh and seven surrounding Azerbaijani territories. The 1994 ceasefire continues to hold, although violence continues along the line of contact separating the opposing forces, as well as the Azerbaijan-Armenia international border. The final status of Nagorno-Karabakh remains the subject of international mediation by the Organization for Security and Cooperation in Europe (OSCE) Minsk Group, which works to help the sides settle the conflict peacefully. The OSCE Minsk Group is co‑chaired by the United States, France, and Russia.

In the 25 years following its independence, Azerbaijan succeeded in significantly reducing the poverty rate and has directed revenues from its oil and gas production to develop the country’s infrastructure. However, corruption remains a problem, and the government has been accused of authoritarianism. The country’s leadership has remained in the Aliyev family since Heydar ALIYEV became president in 1993 and was succeeded by his son, President Ilham ALIYEV in 2003. Following two national referendums in the past several years that eliminated presidential term limits and extended presidential terms from 5 to 7 years, President ALIYEV secured a fourth term as president in April 2018 in an election that international observers noted had serious shortcomings. Reforms are underway to diversify the country’s non-oil economy and additional reforms are needed to address weaknesses in government institutions, particularly in the education and health sectors, and the court system.

Southwestern Asia, bordering the Caspian Sea, between Iran and Russia, with a small European portion north of the Caucasus range

about three-quarters the size of Pennsylvania; slightly smaller than Maine

large, flat Kur-Araz Ovaligi (Kura-Araks Lowland, much of it below sea level) with Great Caucasus Mountains to the north, Qarabag Yaylasi (Karabakh Upland) to the west; Baku lies on Abseron Yasaqligi (Apsheron Peninsula) that juts into Caspian Sea

local scientists consider the Abseron Yasaqligi (Apsheron Peninsula) (including Baku and Sumqayit) and the Caspian Sea to be the ecologically most devastated area in the world because of severe air, soil, and water pollution; soil pollution results from oil spills, from the use of DDT pesticide, and from toxic defoliants used in the production of cotton; surface and underground water are polluted by untreated municipal and industrial wastewater and agricultural run-off 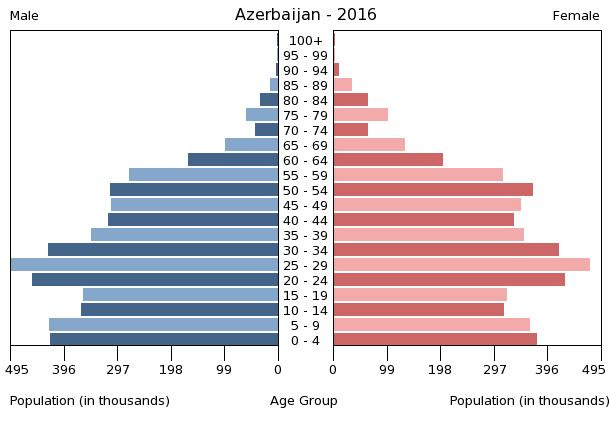 name: Baku (Baki, Baky)
geographic coordinates: 40 23 N, 49 52 E
time difference: UTC+4 (9 hours ahead of Washington, DC, during Standard Time)
daylight saving time: does not observe daylight savings time
etymology: the name derives from the Persian designation of the city "bad-kube" meaning "wind-pounded city" and refers to the harsh winds and severe snow storms that can hit the city note: at approximately 28 m below sea level, Baku's elevation makes it the lowest capital city in the world

Republic Day (founding of the Democratic Republic of Azerbaijan), 28 May (1918)

history: several previous; latest adopted 12 November 1995
amendments: proposed by the president of the republic or by at least 63 members of the National Assembly; passage requires at least 95 votes of Assembly members in two separate readings of the draft amendment six months apart and requires presidential approval after each of the two Assembly votes, followed by presidential signature; constitutional articles on the authority, sovereignty, and unity of the people cannot be amended; amended 2002, 2009, 2016 (2017)

chief of state: President Ilham ALIYEV (since 31 October 2003); First Vice President Mehriban ALIYEVA (since 21 February 2017)
head of government: Prime Minister Ali ASADOV (since 8 October 2019); First Deputy Prime Minister Yaqub EYYUBOV (since June 2006)
cabinet: Council of Ministers appointed by the president and confirmed by the National Assembly
elections/appointments: president directly elected by absolute majority popular vote in 2 rounds if needed for a 7-year term (eligible for unlimited terms); election last held on 11 April 2018 (next to be held in 2025); prime minister and first deputy prime minister appointed by the president and confirmed by the National Assembly; note - a constitutional amendment approved in a September 2016 referendum expanded presidential terms from 5 to 7 years; a separate constitutional amendment approved in the same referendum also introduced the post of first vice-president and additional vice-presidents, who are directly appointed by the president
election results: Ilham ALIYEV reelected president in first round; percent of vote - Ilham ALIYEV (YAP) 86%, Zahid ORUJ (independent) 3.1%, other 10.9%
note: OSCE observers noted shortcomings in the election, including a restrictive political environment, limits on fundamental freedoms, a lack of genuine competition, and ballot box stuffing

three equal horizontal bands of sky blue (top), red, and green; a vertical crescent moon and an eight-pointed star in white are centered in the red band; the blue band recalls Azerbaijan's Turkic heritage, red stands for modernization and progress, and green refers to Islam; the crescent moon and star are a Turkic insignia; the eight star points represent the eight Turkic peoples of the world

name: "Azerbaijan Marsi" (March of Azerbaijan)
lyrics/music: Ahmed JAVAD/Uzeyir HAJIBEYOV
note: adopted 1992; although originally written in 1919 during a brief period of independence, "Azerbaijan Marsi" did not become the official anthem until after the dissolution of the Soviet Union

Prior to the decline in global oil prices since 2014, Azerbaijan's high economic growth was attributable to rising energy exports and to some non-export sectors. Oil exports through the Baku-Tbilisi-Ceyhan Pipeline, the Baku-Novorossiysk, and the Baku-Supsa Pipelines remain the main economic driver, but efforts to boost Azerbaijan's gas production are underway. The expected completion of the geopolitically important Southern Gas Corridor (SGC) between Azerbaijan and Europe will open up another source of revenue from gas exports. First gas to Turkey through the SGC is expected in 2018 with project completion expected by 2020-21.Declining oil prices caused a 3.1% contraction in GDP in 2016, and a 0.8% decline in 2017, highlighted by a sharp reduction in the construction sector. The economic decline was accompanied by higher inflation, a weakened banking sector, and two sharp currency devaluations in 2015. Azerbaijan’s financial sector continued to struggle. In May 2017, Baku allowed the majority state-owed International Bank of Azerbaijan (IBA), the nation’s largest bank, to default on some of its outstanding debt and file for restructuring in Azerbaijani courts; IBA also filed in US and UK bankruptcy courts to have its restructuring recognized in their respective jurisdictions.Azerbaijan has made limited progress with market-based economic reforms. Pervasive public and private sector corruption and structural economic inefficiencies remain a drag on long-term growth, particularly in non-energy sectors. The government has, however, made efforts to combat corruption, particularly in customs and government services. Several other obstacles impede Azerbaijan's economic progress, including the need for more foreign investment in the non-energy sector and the continuing conflict with Armenia over the Nagorno-Karabakh region. While trade with Russia and the other former Soviet republics remains important, Azerbaijan has expanded trade with Turkey and Europe and is seeking new markets for non-oil/gas exports - mainly in the agricultural sector - with Gulf Cooperation Council member countries, the US, and others. It is also improving Baku airport and the Caspian Sea port of Alat for use as a regional transportation and logistics hub.Long-term prospects depend on world oil prices, Azerbaijan's ability to develop export routes for its growing gas production, and its ability to improve the business environment and diversify the economy. In late 2016, the president approved a strategic roadmap for economic reforms that identified key non-energy segments of the economy for development, such as agriculture, logistics, information technology, and tourism. In October 2017, the long-awaited Baku-Tbilisi-Kars railway, stretching from the Azerbaijani capital to Kars in north-eastern Turkey, began limited service.

Azerbaijan, Kazakhstan, and Russia ratified the Caspian seabed delimitation treaties based on equidistance, while Iran continues to insist on a one-fifth slice of the sea; the dispute over the break-away Nagorno-Karabakh region and the Armenian military occupation of surrounding lands in Azerbaijan remains the primary focus of regional instability; residents have evacuated the former Soviet-era small ethnic enclaves in Armenia and Azerbaijan; local border forces struggle to control the illegal transit of goods and people across the porous, undemarcated Armenian, Azerbaijani, and Georgian borders; bilateral talks continue with Turkmenistan on dividing the seabed and contested oilfields in the middle of the Caspian

IDPs: 344,000 (conflict with Armenia over Nagorno-Karabakh; IDPs are mainly ethnic Azerbaijanis but also include ethnic Kurds, Russians, and Turks predominantly from occupied territories around Nagorno-Karabakh; includes IDPs' descendants, returned IDPs, and people living in insecure areas and excludes people displaced by natural disasters; around half the IDPs live in the capital Baku) (2018)
stateless persons: 3,585 (2018)