Prehistoric settlers arrived on the continent from Southeast Asia at least 40,000 years before the first Europeans began exploration in the 17th century. No formal territorial claims were made until 1770, when Capt. James COOK took possession of the east coast in the name of Great Britain (all of Australia was claimed as British territory in 1829 with the creation of the colony of Western Australia). Six colonies were created in the late 18th and 19th centuries; they federated and became the Commonwealth of Australia in 1901. The new country took advantage of its natural resources to rapidly develop agricultural and manufacturing industries and to make a major contribution to the Allied effort in World Wars I and II.In recent decades, Australia has become an internationally competitive, advanced market economy due in large part to economic reforms adopted in the 1980s and its location in one of the fastest growing regions of the world economy. Long-term concerns include an aging population, pressure on infrastructure, and environmental issues such as floods, droughts, and bushfires. Australia is the driest inhabited continent on earth, making it particularly vulnerable to the challenges of climate change. Australia is home to 10% of the world's biodiversity, and a great number of its flora and fauna exist nowhere else in the world.

Oceania, continent between the Indian Ocean and the South Pacific Ocean

slightly smaller than the US contiguous 48 states

generally arid to semiarid; temperate in south and east; tropical in north

soil erosion from overgrazing, deforestation, industrial development, urbanization, and poor farming practices; limited natural freshwater resources; soil salinity rising due to the use of poor quality water; drought, desertification; clearing for agricultural purposes threatens the natural habitat of many unique animal and plant species; disruption of the fragile ecosystem has resulted in significant floral extinctions; the Great Barrier Reef off the northeast coast, the largest coral reef in the world, is threatened by increased shipping and its popularity as a tourist site; overfishing, pollution, and invasive species are also problems 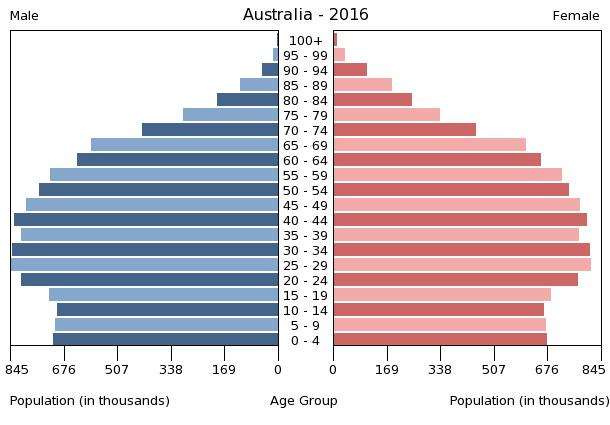 name: Canberra
geographic coordinates: 35 16 S, 149 08 E
time difference: UTC+10 (15 hours ahead of Washington, DC, during Standard Time)
daylight saving time: +1hr, begins first Sunday in October; ends first Sunday in April
etymolgy: the name is claimed to derive from either Kambera or Camberry, which are names corrupted from the original native designation for the area "Nganbra" or "Nganbira"

1 January 1901 (from the federation of UK colonies)

history: approved in a series of referenda from 1898 through 1900 and became law 9 July 1900, effective 1 January 1901
amendments: proposed by Parliament; passage requires approval of a referendum bill by absolute majority vote in both houses of Parliament, approval in a referendum by a majority of voters in at least four states and in the territories, and Royal Assent; proposals that would reduce a state’s representation in either house or change a state’s boundaries require that state’s approval prior to Royal Assent; amended several times, last in 1977 (2017)

common law system based on the English model

citizenship by birth: no
citizenship by descent only: at least one parent must be a citizen or permanent resident of Australia
dual citizenship recognized: yes
residency requirement for naturalization: 4 years

blue with the flag of the UK in the upper hoist-side quadrant and a large seven-pointed star in the lower hoist-side quadrant known as the Commonwealth or Federation Star, representing the federation of the colonies of Australia in 1901; the star depicts one point for each of the six original states and one representing all of Australia's internal and external territories; on the fly half is a representation of the Southern Cross constellation in white with one small, five-pointed star and four larger, seven-pointed stars

name: Advance Australia Fair
lyrics/music: Peter Dodds McCORMICK
note: adopted 1984; although originally written in the late 19th century, the anthem was not used for all official occasions until 1984; as a Commonwealth country, in addition to the national anthem, "God Save the Queen" serves as the royal anthem (see United Kingdom)

Australia is an open market with minimal restrictions on imports of goods and services. The process of opening up has increased productivity, stimulated growth, and made the economy more flexible and dynamic. Australia plays an active role in the WTO, APEC, the G20, and other trade forums. Australia’s free trade agreement (FTA) with China entered into force in 2015, adding to existing FTAs with the Republic of Korea, Japan, Chile, Malaysia, New Zealand, Singapore, Thailand, and the US, and a regional FTA with ASEAN and New Zealand. Australia continues to negotiate bilateral agreements with Indonesia, as well as larger agreements with its Pacific neighbors and the Gulf Cooperation Council countries, and an Asia-wide Regional Comprehensive Economic Partnership that includes the 10 ASEAN countries and China, Japan, Korea, New Zealand, and India.Australia is a significant exporter of natural resources, energy, and food. Australia's abundant and diverse natural resources attract high levels of foreign investment and include extensive reserves of coal, iron, copper, gold, natural gas, uranium, and renewable energy sources. A series of major investments, such as the US$40 billion Gorgon Liquid Natural Gas Project, will significantly expand the resources sector.For nearly two decades up till 2017, Australia had benefited from a dramatic surge in its terms of trade. As export prices increased faster than import prices, the economy experienced continuous growth, low unemployment, contained inflation, very low public debt, and a strong and stable financial system. Australia entered 2018 facing a range of growth constraints, principally driven by the sharp fall in global prices of key export commodities. Demand for resources and energy from Asia and especially China is growing at a slower pace and sharp drops in export prices have impacted growth.

17 years of age for voluntary military service (with parental consent); no conscription; women allowed to serve in most combat roles (2018)

2,000 km(mainly used for recreation on Murray and Murray-Darling River systems) (2011)
country comparison to the world: 42

In 2007, Australia and Timor-Leste agreed to a 50-year development zone and revenue sharing arrangement and deferred a maritime boundary; Australia asserts land and maritime claims to Antarctica; Australia's 2004 submission to the Commission on the Limits of the Continental Shelf extends its continental margins over 3.37 million square kilometers, expanding its seabed roughly 30 percent beyond its claimed EEZ; all borders between Indonesia and Australia have been agreed upon bilaterally, but a 1997 treaty that would settle the last of their maritime and EEZ boundary has yet to be ratified by Indonesia's legislature; Indonesian groups challenge Australia's claim to Ashmore Reef; Australia closed parts of the Ashmore and Cartier reserve to Indonesian traditional fishing

Tasmania is one of the world's major suppliers of licit opiate products; government maintains strict controls over areas of opium poppy cultivation and output of poppy straw concentrate; major consumer of cocaine and amphetamines