In 1783, the Sunni Al-Khalifa family took power in Bahrain. In order to secure these holdings, it entered into a series of treaties with the UK during the 19th century that made Bahrain a British protectorate. The archipelago attained its independence in 1971. A steady decline in oil production and reserves since 1970 prompted Bahrain to take steps to diversify its economy, in the process developing petroleum processing and refining, aluminum production, and hospitality and retail sectors. It has also endeavored to become a leading regional banking center, especially with respect to Islamic finance. Bahrain's small size, central location among Gulf countries, economic dependence on Saudi Arabia, and proximity to Iran require it to play a delicate balancing act in foreign affairs among its larger neighbors. Its foreign policy activities usually fall in line with Saudi Arabia and the UAE.The Sunni royal family has long struggled to manage relations with its large Shia-majority population. In early 2011, amid Arab uprisings elsewhere in the region, the Bahraini Government confronted similar pro-democracy and reform protests at home with police and military action, including deploying Gulf Cooperation Council security forces to Bahrain. Failed political talks prompted opposition political societies to boycott 2014 legislative and municipal council elections. In 2018, a law preventing members of political societies dissolved by the courts from participating in elections effectively sidelined the majority of opposition figures from taking part in national elections. As a result, most members of parliament are independents. Ongoing dissatisfaction with the political status quo continues to factor into sporadic clashes between demonstrators and security forces.

3.5 times the size of Washington, DC

desertification resulting from the degradation of limited arable land, periods of drought, and dust storms; coastal degradation (damage to coastlines, coral reefs, and sea vegetation) resulting from oil spills and other discharges from large tankers, oil refineries, and distribution stations; lack of freshwater resources (groundwater and seawater are the only sources for all water needs); lowered water table leaves aquifers vulnerable to saline contamination; desalinization provides some 90% of the country's freshwater

close to primary Middle Eastern petroleum sources; strategic location in Persian Gulf, through which much of the Western world's petroleum must transit to reach open ocean 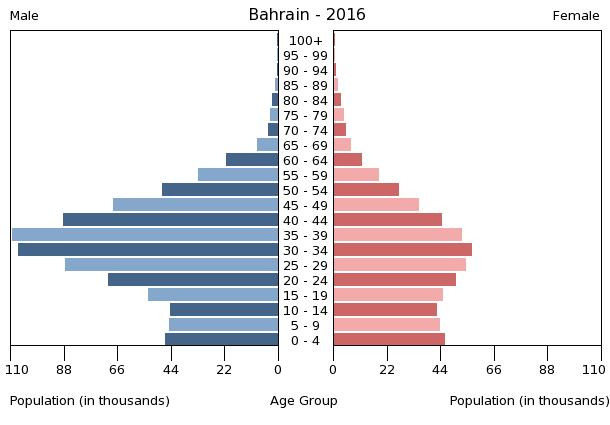 history: adopted 14 February 2002
amendments: proposed by the king or by at least 15 members of either chamber of the National Assembly followed by submission to an Assembly committee for review and, if approved, submitted to the government for restatement as drafts; passage requires a two-thirds majority vote by the membership of both chambers and validation by the king; constitutional articles on the state religion (Islam), state language (Arabic), and the monarchy and "inherited rule" cannot be amended; amended 2012, 2017 (2017)

citizenship by birth: no
citizenship by descent only: the father must be a citizen of Bahrain
dual citizenship recognized: no
residency requirement for naturalization: 25 years; 15 years for Arab nationals

highest courts: Court of Cassation (consists of the chairman and 3 judges); Supreme Court of Appeal (consists of the chairman and 3 judges); Constitutional Court (consists of the president and 6 members); High Sharia Court of Appeal (court sittings include the president and at least one judge)
judge selection and term of office: Court of Cassation judges appointed by royal decree and serve for a specified tenure; Constitutional Court president and members appointed by the Higher Judicial Council, a body chaired by the monarch and includes judges from the Court of Cassation, sharia law courts, and Civil High Courts of Appeal; members serve 9-year terms; High Sharia Court of Appeal member appointments by royal decree for a specified tenure
subordinate courts: Civil High Courts of Appeal; middle and lower civil courts; High Sharia Court of Appeal; Senior Sharia Court; Administrative Courts of Appeal; military courts
note: the judiciary of Bahrain is divided into civil law courts and sharia law courts; sharia courts (involving personal status and family law) are further divided into Sunni Muslim and Shia Muslim; the Courts are supervised by the Supreme Judicial Council.

note: political parties are prohibited, but political societies were legalized under a July 2005 law

red, the traditional color for flags of Persian Gulf states, with a white serrated band (five white points) on the hoist side; the five points represent the five pillars of Islam
note: until 2002, the flag had eight white points, but this was reduced to five to avoid confusion with the Qatari flag

name: "Bahrainona" (Our Bahrain)
lyrics/music: unknown
note: adopted 1971; although Mohamed Sudqi AYYASH wrote the original lyrics, they were changed in 2002 following the transformation of Bahrain from an emirate to a kingdom

Oil and natural gas play a dominant role in Bahrain’s economy. Despite the Government’s past efforts to diversify the economy, oil still comprises 85% of Bahraini budget revenues. In the last few years lower world energy prices have generated sizable budget deficits - about 10% of GDP in 2017 alone. Bahrain has few options for covering these deficits, with low foreign assets and fewer oil resources compared to its GCC neighbors. The three major US credit agencies downgraded Bahrain’s sovereign debt rating to "junk" status in 2016, citing persistently low oil prices and the government’s high debt levels. Nevertheless, Bahrain was able to raise about $4 billion by issuing foreign currency denominated debt in 2017.Other major economic activities are production of aluminum - Bahrain's second biggest export after oil and gas –finance, and construction. Bahrain continues to seek new natural gas supplies as feedstock to support its expanding petrochemical and aluminum industries. In April 2018 Bahrain announced it had found a significant oil field off the country’s west coast, but is still assessing how much of the oil can be extracted profitably.In addition to addressing its current fiscal woes, Bahraini authorities face the long-term challenge of boosting Bahrain’s regional competitiveness — especially regarding industry, finance, and tourism — and reconciling revenue constraints with popular pressure to maintain generous state subsidies and a large public sector. Since 2015, the government lifted subsidies on meat, diesel, kerosene, and gasoline and has begun to phase in higher prices for electricity and water. As part of its diversification plans, Bahrain implemented a Free Trade Agreement (FTA) with the US in August 2006, the first FTA between the US and a Gulf state. It plans to introduce a Value Added Tax (VAT) by the end of 2018.

The National Guard is charged with internal security and assisting the BDF in defending against external threats. (2016)