Belize was the site of several Mayan city states until their decline at the end of the first millennium A.D. The British and Spanish disputed the region in the 17th and 18th centuries; it formally became the colony of British Honduras in 1862. Territorial disputes between the UK and Guatemala delayed the independence of Belize until 1981. Guatemala refused to recognize the new nation until 1992 and the two countries are involved in an ongoing border dispute. Both nations have voted to send the dispute for final resolution to the International Court of Justice. Tourism has become the mainstay of the economy. Current concerns include the country's heavy foreign debt burden, high crime rates, high unemployment combined with a majority youth population, growing involvement in the Mexican and South American drug trade, and one of the highest HIV/AIDS prevalence rates in Central America.

Central America, bordering the Caribbean Sea, between Guatemala and Mexico

territorial sea: 12nm in the north, 3 nm in the south; note - from the mouth of the Sarstoon River to Ranguana Cay, Belize's territorial sea is 3 nm; according to Belize's Maritime Areas Act, 1992, the purpose of this limitation is to provide a framework for negotiating a definitive agreement on territorial differences with Guatemala
exclusive economic zone: 200nm

tropical; very hot and humid; rainy season (May to November); dry season (February to May)

Migration continues to transform Belize's population. About 16% of Belizeans live abroad, while immigrants constitute approximately 15% of Belize's population. Belizeans seeking job and educational opportunities have preferred to emigrate to the United States rather than former colonizer Great Britain because of the United States' closer proximity and stronger trade ties with Belize. Belizeans also emigrate to Canada, Mexico, and English-speaking Caribbean countries. The emigration of a large share of Creoles (Afro-Belizeans) and the influx of Central American immigrants, mainly Guatemalans, Salvadorans, and Hondurans, has changed Belize's ethnic composition. Mestizos have become the largest ethnic group, and Belize now has more native Spanish speakers than English or Creole speakers, despite English being the official language. In addition, Central American immigrants are establishing new communities in rural areas, which contrasts with the urbanization trend seen in neighboring countries. Recently, Chinese, European, and North American immigrants have become more frequent.Immigration accounts for an increasing share of Belize's population growth rate, which is steadily falling due to fertility decline. Belize's declining birth rate and its increased life expectancy are creating an aging population. As the elderly population grows and nuclear families replace extended households, Belize's government will be challenged to balance a rising demand for pensions, social services, and healthcare for its senior citizens with the need to reduce poverty and social inequality and to improve sanitation. 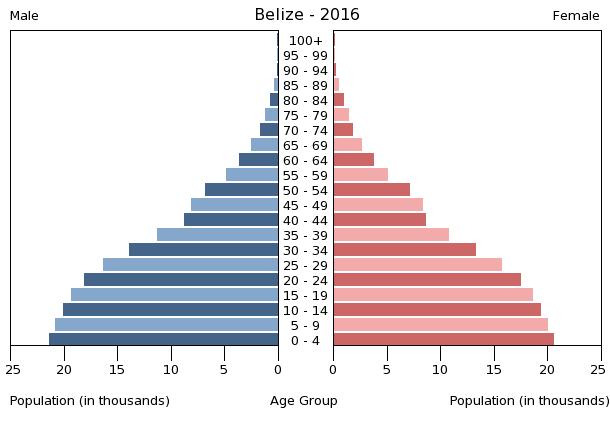 name: Belmopan
geographic coordinates: 17 15 N, 88 46 W
time difference: UTC-6 (1 hour behind Washington, DC, during Standard Time)
etymology:  the decision to move the capital of the country inland to higher and more stable land was made in the 1960s; the name chosen for the new city was formed from the union of two words: "Belize," the name of the longest river in the country, and "Mopan," one of the rivers in the area of the new capital that empties into the Belize River

history: previous 1954, 1963 (preindependence); latest signed and entered into force 21 September 1981
amendments: proposed and adopted by two-thirds majority vote of the National Assembly House of Representatives except for amendments relating to rights and freedoms, changes to the Assembly, and to elections and judiciary matters, which require at least three-quarters majority vote of the House; both types of amendments require assent of the governor general; amended several times, last in 2018 (2019)

description: bicameral National Assembly consists of:
Senate (14 seats, including the president); members appointed by the governor general - 6 on the advice of the prime minister, 3 on the advice of the leader of the opposition, and 1 each on the advice of the Belize Council of Churches and Evangelical Association of Churches, the Belize Chamber of Commerce and Industry and the Belize Better Business Bureau, non-governmental organizations in good standing, and the National Trade Union Congress and the Civil Society Steering Committee; Senate president elected from among the Senate members or from outside the Senate; term of appointment NA
House of Representatives (31 seats; members directly elected in single-seat constituencies by simple majority vote to serve 5-year terms)
elections:
Senate -  last appointed 13 November 2015 (next appointments NA)
House of Representatives - last held on 4 November 2015 (next to be held in November 2020)
election results:
Senate - composition as of June 2019 - men 11, women 3, percent of women 21.4%
House of Representatives - percent of vote by party - UDP 50%, PUP 47.3%, other 2.7%; seats by party - UDP 19, PUP 12; composition - men 29, women 2; percent of women 6.5%; note - total National Assembly percent of women as of June 2019 - 11.1%

royal blue with a narrow red stripe along the top and the bottom edges; centered is a large white disk bearing the coat of arms; the coat of arms features a shield flanked by two workers in front of a mahogany tree with the related motto SUB UMBRA FLOREO (I Flourish in the Shade) on a scroll at the bottom, all encircled by a green garland of 50 mahogany leaves; the colors are those of the two main political parties: blue for the PUP and red for the UDP; various elements of the coat of arms - the figures, the tools, the mahogany tree, and the garland of leaves - recall the logging industry that led to British settlement of Belize
note: Belize's flag is the only national flag that depicts human beings; two British overseas territories, Montserrat and the British Virgin Islands, also depict humans

name: Land of the Free
lyrics/music: Samuel Alfred HAYNES/Selwyn Walford YOUNG
note: adopted 1981; as a Commonwealth country, in addition to the national anthem, "God Save the Queen" serves as the royal anthem (see United Kingdom)

Tourism is the number one foreign exchange earner in this small economy, followed by exports of sugar, bananas, citrus, marine products, and crude oil.The government's expansionary monetary and fiscal policies, initiated in September 1998, led to GDP growth averaging nearly 4% in 1999-2007, but GPD growth has averaged only 2.1% from 2007-2016, with 2.5% growth estimated for 2017. Belize’s dependence on energy imports makes it susceptible to energy price shocks.Although Belize has the third highest per capita income in Central America, the average income figure masks a huge income disparity between rich and poor, and a key government objective remains reducing poverty and inequality with the help of international donors. High unemployment, a growing trade deficit and heavy foreign debt burden continue to be major concerns. Belize faces continued pressure from rising sovereign debt, and a growing trade imbalance.

Guatemala persists in its territorial claim to approximately half of Belize, but agrees to the Line of Adjacency to keep Guatemalan squatters out of Belize's forested interior; both countries agreed in April 2012 to hold simultaneous referenda, scheduled for 6 October 2013, to decide whether to refer the dispute to the ICJ for binding resolution, but this vote was suspended indefinitely; Belize and Mexico are working to solve minor border demarcation discrepancies arising from inaccuracies in the 1898 border treaty

current situation: Belize is a source, destination, and transit country for men, women, and children subjected to forced labor and sex trafficking; the coerced prostitution of women and children by family members has not led to arrests; child sex tourism, involving primarily US citizens, is on the rise; sex trafficking and forced labor of Belizean and foreign women and LGBT individuals occurs in bars, nightclubs, brothels, and domestic service; workers from Central America, Mexico, and Asia may fall victim to forced labor in restaurants, shops, agriculture, and fishing
tier rating: Tier 3 – Belize does not comply fully with the minimum standards for the elimination of human trafficking and is not making significant efforts to do so; authorities did not initiate any new trafficking investigations of prosecutions, and cases from previous years remain pending; law enforcement efforts to use informal means to identify and refer victims were ineffective and draft procedures for referring victims to services are still not finalized; trafficking victims were more commonly arrested, detained, or deported based on immigration violations than provided with assistance; the government did not make progress in implementing the 2012-14 anti-trafficking national strategic plan (2015)