Prior to the arrival of the Spanish in the 16th century, the Inca ruled northern Chile for nearly a century while an indigenous people, the Mapuche, inhabited central and southern Chile. Although Chile declared its independence in 1810, it did not achieve decisive victory over the Spanish until 1818. In the War of the Pacific (1879-83), Chile defeated Peru and Bolivia to win its present northern regions. In the 1880s, the Chilean central government gained control over the central and southern regions inhabited by the Mapuche. After a series of elected governments, the three-year-old Marxist government of Salvador ALLENDE was overthrown in 1973 by a military coup led by General Augusto PINOCHET, who ruled until a democratically-elected president was inaugurated in 1990. Economic reforms, maintained consistently since the 1980s, contributed to steady growth, reduced poverty rates by over half, and helped secure the country's commitment to democratic and representative government. Chile has increasingly assumed regional and international leadership roles befitting its status as a stable, democratic nation.

slightly smaller than twice the size of Montana

temperate; desert in north; Mediterranean in central region; cool and damp in south

note 1: the longest north-south trending country in the world, extending across 39 degrees of latitude; strategic location relative to sea lanes between the Atlantic and Pacific Oceans (Strait of Magellan, Beagle Channel, Drake Passage) note 2: Chile is one of the countries along the Ring of Fire, a belt of active volcanoes and earthquake epicenters bordering the Pacific Ocean; up to 90% of the world's earthquakes and some 75% of the world's volcanoes occur within the Ring of Fire note 3: the Atacama Desert - the driest desert in the world - spreads across the northern part of the country; Ojos del Salado (6,893 m) in the Atacama Desert is the highest active volcano in the world, Chile's tallest mountain, and the second highest in the Western Hemisphere and the Southern Hemisphere - its small crater lake (at 6,390 m) is the world's highest lake

Chile is in the advanced stages of demographic transition and is becoming an aging society - with fertility below replacement level, low mortality rates, and life expectancy on par with developed countries. Nevertheless, with its dependency ratio nearing its low point, Chile could benefit from its favorable age structure. It will need to keep its large working-age population productively employed, while preparing to provide for the needs of its growing proportion of elderly people, especially as women - the traditional caregivers - increasingly enter the workforce. Over the last two decades, Chile has made great strides in reducing its poverty rate, which is now lower than most Latin American countries. However, its severe income inequality ranks as the worst among members of the Organization for Economic Cooperation and Development. Unequal access to quality education perpetuates this uneven income distribution.Chile has historically been a country of emigration but has slowly become more attractive to immigrants since transitioning to democracy in 1990 and improving its economic stability (other regional destinations have concurrently experienced deteriorating economic and political conditions). Most of Chile's small but growing foreign-born population consists of transplants from other Latin American countries, especially Peru. 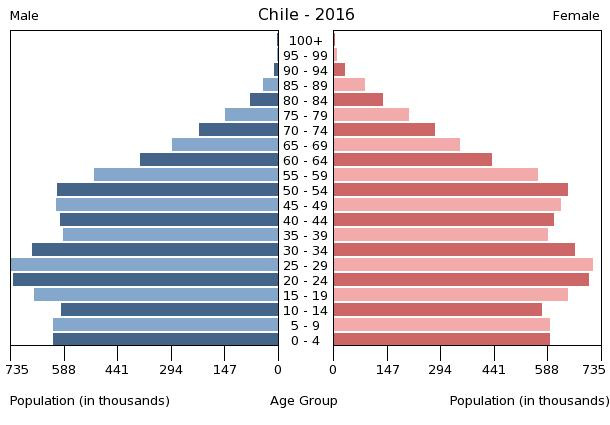 note: Chile has three time zones: the continental portion at UTC-3; the southern Magallanes region, which does not use daylight savings time and remains at UTC-3 for the summer months; and Easter Island at UTC-5

history: many previous; latest adopted 11 September 1980, effective 11 March 1981; note - in March 2018, days before her term ended, President BACHELET sent a proposal for a new constitution to the National Congress, but it has not been pursued by her successor
amendments: proposed by members of either house of the National Congress or by the president of the republic; passage requires at least three-fifths majority vote of the membership in both houses and approval by the president; passage of amendments to constitutional articles, such as the republican form of government, basic rights and freedoms, the Constitutional Tribunal, electoral justice, the Council of National Security, or the constitutional amendment process, requires at least two-third majority vote by both houses of Congress and approval by the president; the president can opt to hold a referendum when Congress and the president disagree on an amendment; amended many times, last in 2018 (2019)

highest courts: Supreme Court or Corte Suprema (consists of a court president and 20 members or ministros); Constitutional Court (consists of 10 members); Elections Qualifying Court (consists of 5 members)
judge selection and term of office: Supreme Court president and judges (ministers) appointed by the president of the republic and ratified by the Senate from lists of candidates provided by the court itself; judges appointed for life with mandatory retirement at age 70; Constitutional Court members appointed - 3 by the Supreme Court, 3 by the president of the republic, 2 by the Chamber of Deputies, and 2 by the Senate; members serve 9-year terms with partial membership replacement every 3 years (the court reviews constitutionality of legislation); Elections Qualifying Court members appointed by lottery - 1 by the former president or vice president of the Senate and 1 by the former president or vice president of the Chamber of Deputies, 2 by the Supreme Court, and 1 by the Appellate Court of Valparaiso; members appointed for 4-year terms
subordinate courts: Courts of Appeal; oral criminal tribunals; military tribunals; local police courts; specialized tribunals and courts in matters such as family, labor, customs, taxes, and electoral affairs

two equal horizontal bands of white (top) and red; a blue square the same height as the white band at the hoist-side end of the white band; the square bears a white five-pointed star in the center representing a guide to progress and honor; blue symbolizes the sky, white is for the snow-covered Andes, and red represents the blood spilled to achieve independence
note: design influenced by the US flag

Chile has a market-oriented economy characterized by a high level of foreign trade and a reputation for strong financial institutions and sound policy that have given it the strongest sovereign bond rating in South America. Exports of goods and services account for approximately one-third of GDP, with commodities making up some 60% of total exports. Copper is Chile’s top export and provides 20% of government revenue.From 2003 through 2013, real growth averaged almost 5% per year, despite a slight contraction in 2009 that resulted from the global financial crisis. Growth slowed to an estimated 1.4% in 2017. A continued drop in copper prices prompted Chile to experience its third consecutive year of slow growth.Chile deepened its longstanding commitment to trade liberalization with the signing of a free trade agreement with the US, effective 1 January 2004. Chile has 26 trade agreements covering 60 countries including agreements with the EU, Mercosur, China, India, South Korea, and Mexico. In May 2010, Chile signed the OECD Convention, becoming the first South American country to join the OECD. In October 2015, Chile signed the Trans-Pacific Partnership trade agreement, which was finalized as the Comprehensive and Progressive Trans-Pacific Partnership (CPTPP) and signed at a ceremony in Chile in March 2018.The Chilean Government has generally followed a countercyclical fiscal policy, under which it accumulates surpluses in sovereign wealth funds during periods of high copper prices and economic growth, and generally allows deficit spending only during periods of low copper prices and growth. As of 31 October 2016, those sovereign wealth funds - kept mostly outside the country and separate from Central Bank reserves - amounted to more than $23.5 billion. Chile used these funds to finance fiscal stimulus packages during the 2009 economic downturn.In 2014, then-President Michelle BACHELET introduced tax reforms aimed at delivering her campaign promise to fight inequality and to provide access to education and health care. The reforms are expected to generate additional tax revenues equal to 3% of Chile’s GDP, mostly by increasing corporate tax rates to OECD averages.

general assessment: most advanced telecommunications infrastructure in South America; modern system based on extensive microwave radio relay facilities; although Chile has one of the highest mobile penetration rates in the region, the number of subscribers has fallen due to subscribers ending multiple SIM card use; this downward trend is expected to be halted as the availability of LTE networks and services broaden; in terms of available broadband speeds the country ranks second highest in South and Central America (2018)
domestic: number of fixed-line connections have stagnated to 18 per 100 in recent years as mobile-cellular usage continues to increase, reaching 130 telephones per 100 persons; domestic satellite system with 3 earth stations (2018)
international: country code - 56; landing points for the Pan-Am, Prat, SAm-1, American Movil-Telxius West Coast Cable, FOS Quellon-Chacabuco, Fibra Optical Austral, SAC and Curie submarine cables providing links to the US, Caribbean and to Central and South America; satellite earth stations - 2 Intelsat (Atlantic Ocean) (2019)

18-45 years of age for voluntary male and female military service, although the right to compulsory recruitment of males 18-45 is retained; service obligation is 12 months for Army and 22 months for Navy and Air Force (2015)

Chile and Peru rebuff Bolivia's reactivated claim to restore the Atacama corridor, ceded to Chile in 1884, but Chile has offered instead unrestricted but not sovereign maritime access through Chile to Bolivian natural gas; Chile rejects Peru's unilateral legislation to change its latitudinal maritime boundary with Chile to an equidistance line with a southwestern axis favoring Peru; in October 2007, Peru took its maritime complaint with Chile to the ICJ; territorial claim in Antarctica (Chilean Antarctic Territory) partially overlaps Argentine and British claims; the joint boundary commission, established by Chile and Argentina in 2001, has yet to map and demarcate the delimited boundary in the inhospitable Andean Southern Ice Field (Campo de Hielo Sur)

transshipment country for cocaine destined for Europe and the region; some money laundering activity, especially through the Iquique Free Trade Zone; imported precursors passed on to Bolivia; domestic cocaine consumption is rising, making Chile a significant consumer of cocaine