French Cameroon became independent in 1960 as the Republic of Cameroon. The following year the southern portion of neighboring British Cameroon voted to merge with the new country to form the Federal Republic of Cameroon. In 1972, a new constitution replaced the federation with a unitary state, the United Republic of Cameroon. The country has generally enjoyed stability, which has enabled the development of agriculture, roads, and railways, as well as a petroleum industry. Despite slow movement toward democratic reform, political power remains firmly in the hands of President Paul BIYA.

Central Africa, bordering the Bight of Biafra, between Equatorial Guinea and Nigeria

slightly larger than California; about four times the size of Pennsylvania

varies with terrain, from tropical along coast to semiarid and hot in north

diverse, with coastal plain in southwest, dissected plateau in center, mountains in west, plains in north

volcanic activity with periodic releases of poisonous gases from Lake Nyos and Lake Monoun volcanoes volcanism: Mt. Cameroon (4,095 m), which last erupted in 2000, is the most frequently active volcano in West Africa; lakes in Oku volcanic field have released fatal levels of gas on occasion, killing some 1,700 people in 1986

sometimes referred to as the hinge of Africa because of its central location on the continent and its position at the west-south juncture of the Gulf of Guinea; throughout the country there are areas of thermal springs and indications of current or prior volcanic activity; Mount Cameroon, the highest mountain in Sub-Saharan west Africa, is an active volcano

25,640,965 (July 2018 est.)
note: estimates for this country explicitly take into account the effects of excess mortality due to AIDS; this can result in lower life expectancy, higher infant mortality, higher death rates, lower population growth rates, and changes in the distribution of population by age and sex than would otherwise be expected
country comparison to the world: 53

Cameroon has a large youth population, with more than 60% of the populace under the age of 25. Fertility is falling but remains at a high level, especially among poor, rural, and uneducated women, in part because of inadequate access to contraception. Life expectancy remains low at about 55 years due to the prevalence of HIV and AIDs and an elevated maternal mortality rate, which has remained high since 1990. Cameroon, particularly the northern region, is vulnerable to food insecurity largely because of government mismanagement, corruption, high production costs, inadequate infrastructure, and natural disasters. Despite economic growth in some regions, poverty is on the rise, and is most prevalent in rural areas, which are especially affected by a shortage of jobs, declining incomes, poor school and health care infrastructure, and a lack of clean water and sanitation. Underinvestment in social safety nets and ineffective public financial management also contribute to Cameroon’s high rate of poverty.International migration has been driven by unemployment (including fewer government jobs), poverty, the search for educational opportunities, and corruption. The US and Europe are preferred destinations, but, with tighter immigration restrictions in these countries, young Cameroonians are increasingly turning to neighboring states, such as Gabon and Nigeria, South Africa, other parts of Africa, and the Near and Far East. Cameroon’s limited resources make it dependent on UN support to host more than 320,000 refugees and asylum seekers as of September 2017. These refugees and asylum seekers are primarily from the Central African Republic and more recently Nigeria. 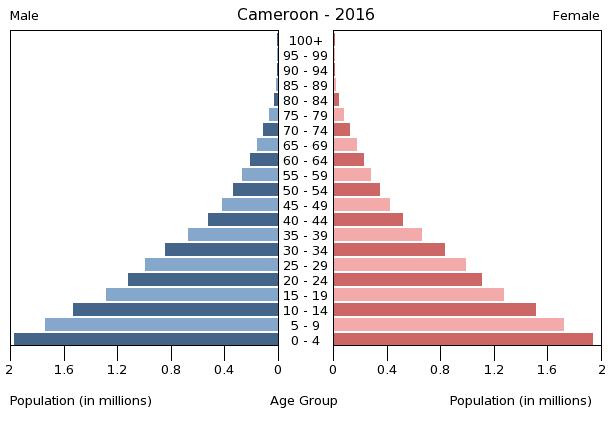 history: several previous; latest effective 18 January 1996
amendments: proposed by the president of the republic or by Parliament; amendment drafts require approval of at least one third of the membership in either house of Parliament; passage requires absolute majority vote of the Parliament membership; passage of drafts requested by the president for a second reading in Parliament requires two-thirds majority vote of its membership; the president can opt to submit drafts to a referendum, in which case passage requires a simple majority; constitutional articles on Cameroon’s unity and territorial integrity and its democratic principles cannot be amended; amended 2008 (2017)

citizenship by birth: no
citizenship by descent only: at least one parent must be a citizen of Cameroon
dual citizenship recognized: no
residency requirement for naturalization: 5 years

highest courts: Supreme Court of Cameroon (consists of 9 titular and 6 surrogate judges and organized into judicial, administrative, and audit chambers); Constitutional Council (consists of 11 members)
judge selection and term of office: Supreme Court judges appointed by the president with the advice of the Higher Judicial Council of Cameroon, a body chaired by the president and includes the minister of justice, selected magistrates, and representatives of the National Assembly; judge term NA; Constitutional Council members appointed by the president for single 9-year terms
subordinate courts: Parliamentary Court of Justice (jurisdiction limited to cases involving the president and prime minister); appellate and first instance courts; circuit and magistrates' courts

three equal vertical bands of green (hoist side), red, and yellow, with a yellow five-pointed star centered in the red band; the vertical tricolor recalls the flag of France; red symbolizes unity, yellow the sun, happiness, and the savannahs in the north, and green hope and the forests in the south; the star is referred to as the "star of unity"
note: uses the popular Pan-African colors of Ethiopia

general assessment: equipment is old and outdated, and connections with many parts of the country are unreliable; 3G service and LTE service both developing given growing competition, along with a fast-developing mobile broadband sector (2018)
domestic: only about 3 per 100 persons for fixed-line subscriptions; mobile-cellular usage has increased sharply, reaching a subscribership base of over 79 per 100 persons (2018)
international: country code - 237; landing points for the SAT-3/WASC, SAIL, ACE, NCSCS, Ceiba-2, and WACS fiber-optic submarine cable that provides connectivity to Europe, South America, and West Africa; satellite earth stations - 2 Intelsat (Atlantic Ocean); (2019)

government maintains tight control over broadcast media; state-owned Cameroon Radio Television (CRTV), broadcasting on both a TV and radio network, was the only officially recognized and fully licensed broadcaster until August 2007, when the government finally issued licenses to 2 private TV broadcasters and 1 private radio broadcaster; about 70 privately owned, unlicensed radio stations operating but are subject to closure at any time; foreign news services required to partner with state-owned national station (2019)

(major rivers in the south, such as the Wouri and the Sanaga, are largely non-navigable; in the north, the Benue, which connects through Nigeria to the Niger River, is navigable in the rainy season only to the port of Garoua) (2010)

Joint Border Commission with Nigeria reviewed 2002 ICJ ruling on the entire boundary and bilaterally resolved differences, including June 2006 Greentree Agreement that immediately ceded sovereignty of the Bakassi Peninsula to Cameroon with a full phase-out of Nigerian control and patriation of residents in 2008; Cameroon and Nigeria agreed on maritime delimitation in March 2008; sovereignty dispute between Equatorial Guinea and Cameroon over an island at the mouth of the Ntem River; only Nigeria and Cameroon have heeded the Lake Chad Commission's admonition to ratify the delimitation treaty, which also includes the Chad-Niger and Niger-Nigeria boundaries