Under US administration as part of the UN Trust Territory of the Pacific, the people of the Northern Mariana Islands decided in the 1970s not to seek independence but instead to forge closer links with the US. Negotiations for territorial status began in 1972. A covenant to establish a commonwealth in political union with the US was approved in 1975, and came into force on 24 March 1976. A new government and constitution went into effect in 1978.

Oceania, islands in the North Pacific Ocean, about three-quarters of the way from Hawaii to the Philippines

the southern islands in this north-south trending archipelago are limestone, with fringing coral reefs; the northern islands are volcanic, with active volcanoes on several islands

approximately 90% of the population lives on the island of Saipan

contamination of groundwater on Saipan may contribute to disease; clean-up of landfill; protection of endangered species conflicts with development

Christian (Roman Catholic majority, although traditional beliefs and taboos may still be found) 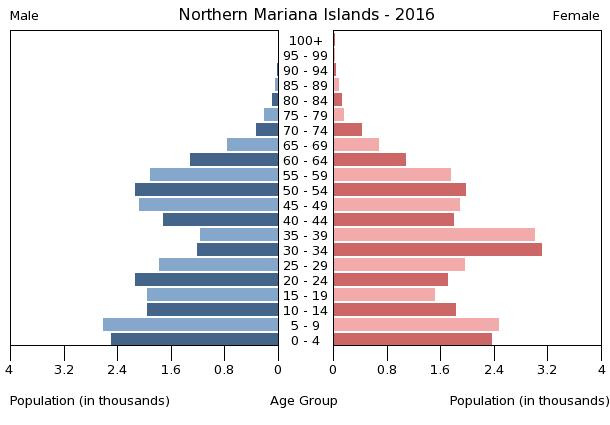 approximately 90% of the population lives on the island of Saipan

commonwealth in political union with and under the sovereignty of the US; federal funds to the Commonwealth administered by the US Department of the Interior, Office of Insular Affairs

republican form of government with separate executive, legislative, and judicial branches; a commonwealth in political union with and under the sovereignty of the US

none (commonwealth in political union with the US); there are no first-order administrative divisions as defined by the US Government, but there are 4 municipalities at the second order: Northern Islands, Rota, Saipan, Tinian

none (commonwealth in political union with the US)

history: partially effective 9 January 1978 (Constitution of the Commonwealth of the Northern Mariana Islands); fully effective 4 November 1986 (Covenant Agreement)
amendments: proposed by constitutional convention, by public petition, or by the Legislature; ratification of proposed amendments requires approval by voters at the next general election or special election; amendments proposed by constitutional convention or by petition become effective if approved by a majority of voters and at least two-thirds majority of voters in each of two senatorial districts; amendments proposed by the Legislature are effective if approved by majority vote; amended several times, last in 2012 (2017)

the laws of the US apply, except for customs and some aspects of taxation

18 years of age; universal; note - indigenous inhabitants are US citizens but do not vote in US presidential elections

chief of state: President Donald J. TRUMP (since 20 January 2017); Vice President Michael R. PENCE (since 20 January 2017)
head of government: Governor Ralph TORRES (since 29 December 2015); Lieutenant Governor Victor HOCOG (since 29 December 2015)
cabinet: Cabinet appointed by the governor with the advice and consent of the Senate
elections/appointments: president and vice president indirectly elected on the same ballot by an Electoral College of 'electors' chosen from each state; president and vice president serve a 4-year term (eligible for a second term); under the US Constitution, residents of the Northern Mariana Islands do not vote in elections for US president and vice president; however, they may vote in Democratic and Republican party presidential primary elections; governor directly elected by absolute majority vote in 2 rounds if needed; election last held on 13 November 2018 (next to be held in 2022)
election results: Ralph TORRES elected governor; percent of vote - Ralph TORRES (Republican) 62.2%, Juan BABAUTA (Independent) 37.8%;  Arnold PALACIOS elected Lieutenant Governor

blue with a white, five-pointed star superimposed on a gray latte stone (the traditional foundation stone used in building) in the center, surrounded by a wreath; blue symbolizes the Pacific Ocean, the star represents the Commonwealth; the latte stone and the floral head wreath display elements of the native Chamorro culture

name: "Gi Talo Gi Halom Tasi" (In the Middle of the Sea)
lyrics/music: Jose S. PANGELINAN [Chamoru], David PETER [Carolinian]/Wilhelm GANZHORN
note: adopted 1996; the Carolinian version of the song is known as "Satil Matawal Pacifico;" as a commonwealth of the US, in addition to the local anthem, "The Star-Spangled Banner" is official (see United States)

The economy of the Commonwealth of the Northern Mariana Islands(CNMI) has been on the rebound in the last few years, mainly on the strength of its tourism industry. In 2016, the CNMI’s real GDP increased 28.6% over the previous year, following two years of relatively rapid growth in 2014 and 2015. Chinese and Korean tourists have supplanted Japanese tourists in the last few years. The Commonwealth is making a concerted effort to broaden its tourism by extending casino gambling from the small Islands of Tinian and Rota to the main Island of Saipan, its political and commercial center. Investment is concentrated on hotels and casinos in Saipan, the CNMI’s largest island and home to about 90% of its population.Federal grants have also contributed to economic growth and stability. In 2016, federal grants amounted to $101.4 billion which made up 26% of the CNMI government’s total revenues. A small agriculture sector consists of cattle ranches and small farms producing coconuts, breadfruit, tomatoes, and melons.Legislation is pending in the US Congress to extend the transition period to allow foreign workers to work in the CNMI on temporary visas.