Once the seat of Viking raiders and later a major north European power, Denmark has evolved into a modern, prosperous nation that is participating in the general political and economic integration of Europe. It joined NATO in 1949 and the EEC (now the EU) in 1973. However, the country has opted out of certain elements of the EU's Maastricht Treaty, including the European Economic and Monetary Union, European defense cooperation, and issues concerning certain justice and home affairs.

total: 43,094 sq km
land: 42,434 sq km
water: 660 sq km
note: includes the island of Bornholm in the Baltic Sea and the rest of metropolitan Denmark (the Jutland Peninsula, and the major islands of Sjaelland and Fyn), but excludes the Faroe Islands and Greenland
country comparison to the world: 134

slightly less than twice the size of Massachusetts; about two-thirds the size of West Virginia

flooding is a threat in some areas of the country (e.g., parts of Jutland, along the southern coast of the island of Lolland) that are protected from the sea by a system of dikes

air pollution, principally from vehicle and power plant emissions; nitrogen and phosphorus pollution of the North Sea; drinking and surface water becoming polluted from animal wastes and pesticides; much of country's household and industrial waste is recycled

composed of the Jutland Peninsula and a group of more than 400 islands (Danish Archipelago); controls Danish Straits (Skagerrak and Kattegat) linking Baltic and North Seas; about one-quarter of the population lives in greater Copenhagen 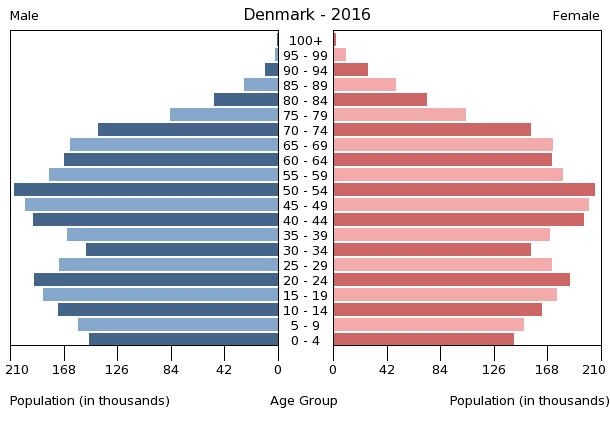 history: several previous; latest adopted 5 June 1953
amendments: proposed by the Folketing with consent of the government; passage requires approval by the next Folketing following a general election, approval by simple majority vote of at least 40% of voters in a referendum, and assent of the chief of state; changed several times, last in 2009 (Danish Act of Succession) (2016)

citizenship by birth: no
citizenship by descent only: at least one parent must be a citizen of Denmark
dual citizenship recognized: yes
residency requirement for naturalization: 7 years

chief of state: Queen MARGRETHE II (since 14 January 1972); Heir Apparent Crown Prince FREDERIK (elder son of the monarch, born on 26 May 1968)
head of government: Prime Minister Mette FREDERIKSEN (since 27 June 2019)
cabinet: Council of State appointed by the monarch
elections/appointments: the monarchy is hereditary; following legislative elections, the leader of the majority party or majority coalition usually appointed prime minister by the monarch

highest courts: Supreme Court (consists of the court president and 18 judges)
judge selection and term of office: judges appointed by the monarch upon the recommendation of the Minister of Justice, with the advice of the Judicial Appointments Council, a 6-member independent body of judges and lawyers; judges appointed for life with retirement at age 70
subordinate courts: Special Court of Indictment and Revision; 2 High Courts; Maritime and Commercial Court; county courts

red with a white cross that extends to the edges of the flag; the vertical part of the cross is shifted to the hoist side; the banner is referred to as the Dannebrog (Danish flag) and is one of the oldest national flags in the world; traditions as to the origin of the flag design vary, but the best known is a legend that the banner fell from the sky during an early-13th century battle; caught up by the Danish king before it ever touched the earth, this heavenly talisman inspired the royal army to victory; in actuality, the flag may derive from a crusade banner or ensign
note: the shifted cross design element was subsequently adopted by the other Nordic countries of Finland, Iceland, Norway, and Sweden

This thoroughly modern market economy features advanced industry with world-leading firms in pharmaceuticals, maritime shipping, and renewable energy, and a high-tech agricultural sector. Danes enjoy a high standard of living, and the Danish economy is characterized by extensive government welfare measures and an equitable distribution of income. An aging population will be a long-term issue.Denmark’s small open economy is highly dependent on foreign trade, and the government strongly supports trade liberalization. Denmark is a net exporter of food, oil, and gas and enjoys a comfortable balance of payments surplus, but depends on imports of raw materials for the manufacturing sector.Denmark is a member of the EU but not the eurozone. Despite previously meeting the criteria to join the European Economic and Monetary Union, Denmark has negotiated an opt-out with the EU and is not required to adopt the euro.Denmark is experiencing a modest economic expansion. The economy grew by 2.0% in 2016 and 2.1% in 2017. The expansion is expected to decline slightly in 2018. Unemployment stood at 5.5% in 2017, based on the national labor survey. The labor market was tight in 2017, with corporations experiencing some difficulty finding appropriately-skilled workers to fill billets. The Danish Government offers extensive programs to train unemployed persons to work in sectors that need qualified workers.Denmark maintained a healthy budget surplus for many years up to 2008, but the global financial crisis swung the budget balance into deficit. Since 2014 the balance has shifted between surplus and deficit. In 2017 there was a surplus of 1.0%. The government projects a lower deficit in 2018 and 2019 of 0.7%, and public debt (EMU debt) as a share of GDP is expected to decline to 35.6% in 2018 and 34.8% in 2019. The Danish Government plans to address increasing municipal, public housing and integration spending in 2018.

35.3% of GDP (2017 est.)
37.9% of GDP (2016 est.)
note: data cover general government debt and include debt instruments issued (or owned) by government entities other than the treasury; the data include treasury debt held by foreign entities; the data include debt issued by subnational entities, as well as intra-governmental debt; intragovernmental debt consists of treasury borrowings from surpluses in the social funds, such as for retirement, medical care, and unemployment; debt instruments for the social funds are not sold at public auctions
country comparison to the world: 151

18 years of age for compulsory and voluntary military service; conscripts serve an initial training period that varies from 4 to 12 months according to specialization; former conscripts are assigned to mobilization units; women eligible to volunteer for military service; in addition to full time employment, the Danish Military offers reserve contracts in all three branches (2016)

Iceland, the UK, and Ireland dispute Denmark's claim that the Faroe Islands' continental shelf extends beyond 200 nm; sovereignty dispute with Canada over Hans Island in the Kennedy Channel between Ellesmere Island and Greenland; Denmark (Greenland) and Norway have made submissions to the Commission on the Limits of the Continental Shelf (CLCS) and Russia is collecting additional data to augment its 2001 CLCS submission