The French Territory of the Afars and the Issas became Djibouti in 1977. Hassan Gouled APTIDON installed an authoritarian one-party state and proceeded to serve as president until 1999. Unrest among the Afar minority during the 1990s led to a civil war that ended in 2001 with a peace accord between Afar rebels and the Somali Issa-dominated government. In 1999, Djibouti's first multiparty presidential election resulted in the election of Ismail Omar GUELLEH as president; he was reelected to a second term in 2005 and extended his tenure in office via a constitutional amendment, which allowed him to serve a third term in 2011 and begin a fourth term in 2016. Djibouti occupies a strategic geographic location at the intersection of the Red Sea and the Gulf of Aden. Its ports handle 95% of Ethiopia’s trade. Djibouti’s ports also service transshipments between Europe, the Middle East, and Asia. The government holds longstanding ties to France, which maintains a military presence in the country, as does the US, Japan, Italy, Germany, Spain, and China.

Eastern Africa, bordering the Gulf of Aden and the Red Sea, between Eritrea and Somalia

strategic location near world's busiest shipping lanes and close to Arabian oilfields; terminus of rail traffic into Ethiopia; mostly wasteland; Lac Assal (Lake Assal) is the lowest point in Africa and the saltiest lake in the world

Djibouti is a poor, predominantly urban country, characterized by high rates of illiteracy, unemployment, and childhood malnutrition. More than 75% of the population lives in cities and towns (predominantly in the capital, Djibouti). The rural population subsists primarily on nomadic herding. Prone to droughts and floods, the country has few natural resources and must import more than 80% of its food from neighboring countries or Europe. Health care, particularly outside the capital, is limited by poor infrastructure, shortages of equipment and supplies, and a lack of qualified personnel. More than a third of health care recipients are migrants because the services are still better than those available in their neighboring home countries. The nearly universal practice of female genital cutting reflects Djibouti’s lack of gender equality and is a major contributor to obstetrical complications and its high rates of maternal and infant mortality. A 1995 law prohibiting the practice has never been enforced.Because of its political stability and its strategic location at the confluence of East Africa and the Gulf States along the Gulf of Aden and the Red Sea, Djibouti is a key transit point for migrants and asylum seekers heading for the Gulf States and beyond. Each year some hundred thousand people, mainly Ethiopians and some Somalis, journey through Djibouti, usually to the port of Obock, to attempt a dangerous sea crossing to Yemen. However, with the escalation of the ongoing Yemen conflict, Yemenis began fleeing to Djibouti in March 2015, with almost 20,000 arriving by August 2017. Most Yemenis remain unregistered and head for Djibouti City rather than seeking asylum at one of Djibouti’s three spartan refugee camps. Djibouti has been hosting refugees and asylum seekers, predominantly Somalis and lesser numbers of Ethiopians and Eritreans, at camps for 20 years, despite lacking potable water, food shortages, and unemployment. 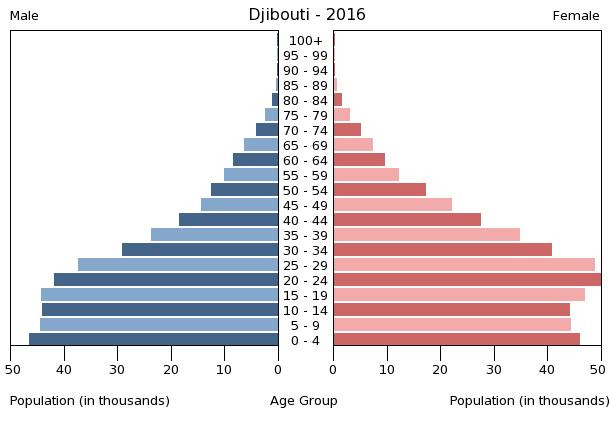 history: approved by referendum 4 September 1992
amendments: proposed by the president of the republic or by the National Assembly; Assembly consideration of proposals requires assent at least one third of the membership; passage requires a simple majority vote by the Assembly and approval by simple majority vote in a referendum; the president can opt to bypass a referendum if adopted by at least two-thirds majority vote of the Assembly; constitutional articles on the sovereignty of Djibouti, its republican form of government, and its pluralist form of democracy cannot by amended; amended 2006, 2008, 2010 (2017)

mixed legal system based primarily on the French civil code (as it existed in 1997), Islamic religious law (in matters of family law and successions), and customary law

citizenship by birth: no
citizenship by descent only: the mother must be a citizen of Djibouti
dual citizenship recognized: no
residency requirement for naturalization: 10 years

two equal horizontal bands of light blue (top) and light green with a white isosceles triangle based on the hoist side bearing a red five-pointed star in the center; blue stands for sea and sky and the Issa Somali people; green symbolizes earth and the Afar people; white represents peace; the red star recalls the struggle for independence and stands for unity

Djibouti's economy is based on service activities connected with the country's strategic location as a deepwater port on the Red Sea. Three-fourths of Djibouti's inhabitants live in the capital city; the remainder are mostly nomadic herders. Scant rainfall and less than 4% arable land limits crop production to small quantities of fruits and vegetables, and most food must be imported.Djibouti provides services as both a transit port for the region and an international transshipment and refueling center. Imports, exports, and reexports represent 70% of port activity at Djibouti's container terminal. Reexports consist primarily of coffee from landlocked neighbor Ethiopia. Djibouti has few natural resources and little industry. The nation is, therefore, heavily dependent on foreign assistance to support its balance of payments and to finance development projects. An official unemployment rate of nearly 40% - with youth unemployment near 80% - continues to be a major problem. Inflation was a modest 3% in 2014-2017, due to low international food prices and a decline in electricity tariffs.Djibouti’s reliance on diesel-generated electricity and imported food and water leave average consumers vulnerable to global price shocks, though in mid-2015 Djibouti passed new legislation to liberalize the energy sector. The government has emphasized infrastructure development for transportation and energy and Djibouti – with the help of foreign partners, particularly China – has begun to increase and modernize its port capacity. In 2017, Djibouti opened two of the largest projects in its history, the Doraleh Port and Djibouti-Addis Ababa Railway, funded by China as part of the "Belt and Road Initiative," which will increase the country’s ability to capitalize on its strategic location.

general assessment: telephone facilities in the city of Djibouti are adequate, as are the microwave radio relay connections to outlying areas of the country; Djibouti is one of the few remaining countries in which the national telco, Djibouti Telecom (DT), has a monopoly on all telecom services, including fixed lines, mobile, Internet and broadband; the lack of competition has meant that the market has not lived up to its potential (2018)
domestic: Djibouti Telecom  (DT) is the sole provider of telecommunications services and utilizes mostly a microwave radio relay network; fiber-optic cable is installed in the capital; rural areas connected via wireless local loop radio systems; mobile cellular coverage is primarily limited to the area in and around Djibouti city; 4 per 100 fixed-line, 43 per 100 moblie-cellular (2018)
international: country code - 253; landing point for the SEA-ME-WE-3 & 5, EASSy, Aden-Djibouti, Africa-1, DARE-1, EIG, MENA, Bridge International, PEACE Cable, and SEACOM fiber-optic submarine cable systems providing links to Asia, the Middle East, Europe, Southeast Asia, Australia and Africa; satellite earth stations - 2 (1 Intelsat - Indian Ocean and 1 Arabsat) (2019)

the International Maritime Bureau reports offshore waters in the Red Sea and Gulf of Aden remain a high risk for piracy; the presence of several naval task forces in the Gulf of Aden and additional anti-piracy measures on the part of ship operators, including the use of on-board armed security teams, contributed to the drop in incidents; there was one incident in the Gulf of Aden and none in the Red Sea in 2018; Operation Ocean Shield, the NATO/EUNAVFOR naval task force established in 2009 to combat Somali piracy, concluded its operations in December 2016 as a result of the drop in reported incidents over the last few years; the EU naval mission, Operation ATALANTA, continues its operations in the Gulf of Aden and Indian Ocean through 2020; naval units from Japan, India, and China also operate in conjunction with EU forces; China has established a logistical base in Djibouti to support its deployed naval units in the Horn of Africa

Djibouti maintains economic ties and border accords with "Somaliland" leadership while maintaining some political ties to various factions in Somalia; Kuwait is chief investor in the 2008 restoration and upgrade of the Ethiopian-Djibouti rail link; in 2008, Eritrean troops moved across the border on Ras Doumera peninsula and occupied Doumera Island with undefined sovereignty in the Red Sea

current situation: Djibouti is a transit, source, and destination country for men, women, and children subjected to forced labor and sex trafficking; economic migrants from East Africa en route to Yemen and other Middle East locations are vulnerable to exploitation in Djibouti; some women and girls may be forced into domestic servitude or prostitution after reaching Djibouti City, the Ethiopia-Djibouti trucking corridor, or Obock – the main crossing point into Yemen; Djiboutian and foreign children may be forced to beg, to work as domestic servants, or to commit theft and other petty crimes
tier rating: Tier 2 Watch List – Djibouti does not fully comply with the minimum standards for the elimination of trafficking; however, it is making significant efforts to do so; in 2014, Djibouti was granted a waiver from an otherwise required downgrade to Tier 3 because its government has a written plan that, if implemented would constitute making significant efforts to bring itself into compliance with the minimum standards for the elimination of trafficking; one forced labor trafficker was convicted in 2014 but received a suspended sentence inadequate to deter trafficking; authorities did not investigate or prosecute any other forced labor crimes, any sex trafficking offenses, or any officials complicit in human trafficking, and remained limited in their ability to recognize or protect trafficking victims; official round-ups, detentions, and deportations of non-Djiboutian residents, including children without screening for trafficking victims remained routine; the government did not provide care to victims but supported local NGOs operating centers that assisted victims (2015)