What is now Ecuador formed part of the northern Inca Empire until the Spanish conquest in 1533. Quito became a seat of Spanish colonial government in 1563 and part of the Viceroyalty of New Granada in 1717. The territories of the Viceroyalty - New Granada (Colombia), Venezuela, and Quito - gained their independence between 1819 and 1822 and formed a federation known as Gran Colombia. When Quito withdrew in 1830, the traditional name was changed in favor of the "Republic of the Equator." Between 1904 and 1942, Ecuador lost territories in a series of conflicts with its neighbors. A border war with Peru that flared in 1995 was resolved in 1999. Although Ecuador marked 30 years of civilian governance in 2004, the period was marred by political instability. Protests in Quito contributed to the mid-term ouster of three of Ecuador's last four democratically elected presidents. In late 2008, voters approved a new constitution, Ecuador's 20th since gaining independence. General elections were held in April 2017, and voters elected President Lenin MORENO.

Western South America, bordering the Pacific Ocean at the Equator, between Colombia and Peru

mean elevation: 1,117 m
lowest point: Pacific Ocean 0 m
highest point: Chimborazo 6,267
note: because the earth is not a perfect sphere and has an equatorial bulge, the highest point on the planet farthest from its center is Mount Chimborazo not Mount Everest, which is merely the highest peak above sea level

Cotopaxi in Andes is highest active volcano in world

Ecuador's high poverty and income inequality most affect indigenous, mixed race, and rural populations. The government has increased its social spending to ameliorate these problems, but critics question the efficiency and implementation of its national development plan. Nevertheless, the conditional cash transfer program, which requires participants' children to attend school and have medical check-ups, has helped improve educational attainment and healthcare among poor children. Ecuador is stalled at above replacement level fertility and the population most likely will keep growing rather than stabilize.An estimated 2 to 3 million Ecuadorians live abroad, but increased unemployment in key receiving countries - Spain, the United States, and Italy - is slowing emigration and increasing the likelihood of returnees to Ecuador. The first large-scale emigration of Ecuadorians occurred between 1980 and 2000, when an economic crisis drove Ecuadorians from southern provinces to New York City, where they had trade contacts. A second, nationwide wave of emigration in the late 1990s was caused by another economic downturn, political instability, and a currency crisis. Spain was the logical destination because of its shared language and the wide availability of low-skilled, informal jobs at a time when increased border surveillance made illegal migration to the US difficult. Ecuador has a small but growing immigrant population and is Latin America's top recipient of refugees; 98% are neighboring Colombians fleeing violence in their country. 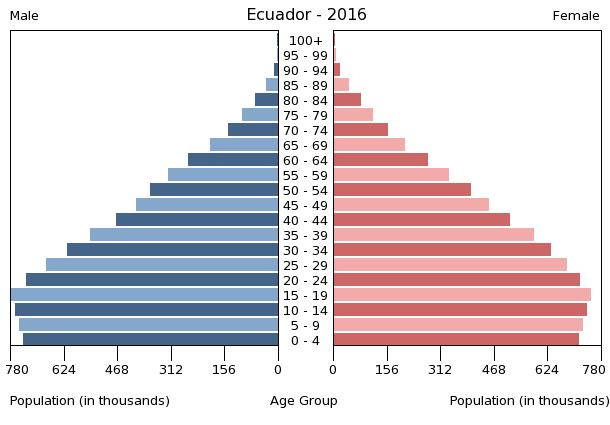 history: many previous; latest approved 20 October 2008
amendments: proposed by the president of the republic through a referendum, by public petition of at least 1% of registered voters, or by agreement of at least one-third membership of the National Assembly; passage requires two separate readings a year apart and approval by at least two-thirds majority vote of the Assembly, and approval by absolute majority in a referendum; amendments such as changes to the structure of the state, constraints on personal rights and guarantees, or constitutional amendment procedures are not allowed; amended 2011, 2015, 2018; note - a 2015 constitutional amendment lifting presidential term limits was overturned by a February 2018 referendum (2018)

civil law based on the Chilean civil code with modifications; traditional law in indigenous communities

three horizontal bands of yellow (top, double width), blue, and red with the coat of arms superimposed at the center of the flag; the flag retains the three main colors of the banner of Gran Colombia, the South American republic that broke up in 1830; the yellow color represents sunshine, grain, and mineral wealth, blue the sky, sea, and rivers, and red the blood of patriots spilled in the struggle for freedom and justice
note: similar to the flag of Colombia, which is shorter and does not bear a coat of arms

Ecuador is substantially dependent on its petroleum resources, which accounted for about a third of the country's export earnings in 2017. Remittances from overseas Ecuadorian are also important.In 1999/2000, Ecuador's economy suffered from a banking crisis that lead to some reforms, including adoption of the US dollar as legal tender. Dollarization stabilized the economy, and positive growth returned in most of the years that followed. China has become Ecuador's largest foreign lender since 2008 and now accounts for 77.7% of the Ecuador’s bilateral debt. Various economic policies under the CORREA administration, such as an announcement in 2017 that Ecuador would terminate 13 bilateral investment treaties - including one with the US, generated economic uncertainty and discouraged private investment.Faced with a 2013 trade deficit of $1.1 billion, Ecuador imposed tariff surcharges from 5% to 45% on an estimated 32% of imports. Ecuador’s economy fell into recession in 2015 and remained in recession in 2016. Declining oil prices and exports forced the CORREA administration to cut government oulays. Foreign investment in Ecuador is low as a result of the unstable regulatory environment and weak rule of law.n April of 2017, Lenin MORENO was elected President of Ecuador by popular vote. His immediate challenge was to reengage the private sector to improve cash flow in the country. Ecuador’s economy returned to positive, but sluggish, growth. In early 2018, the MORENO administration held a public referendum on seven economic and political issues in a move counter to CORREA-administration policies, reduce corruption, strengthen democracy, and revive employment and the economy. The referendum resulted in repeal of taxes associated with recovery from the earthquake of 2016, reduced restrictions on metal mining in the Yasuni Intangible Zone - a protected area, and several political reforms.

the US dollar became Ecuador's currency in 2001

general assessment: fixed-line service and sophisticated 4G LTE ultra-broadband network; much of the country's fixed-line structure is influenced by topographical challenges associated with the Andes Mountains; Ecuador has a small telecom market with a dominant mobile sector;  the state-owned incumbent CNT dominates the fixed-line market, and therefore  the DSL broadband market as well (2018)
domestic: fixed-line services with digital networks provided by multiple telecommunications operators; fixed-line teledensity stands at about 15 per 100 persons; mobile-cellular use has surged and subscribership has reached 85 per 100 persons (2018)
international: country code - 593; landing points for the PAN-AM, PCCS, America Movil-Telxius West Coast Cable and SAm-1 submarine cables that provide links to South and Central America, and extending onward to the Caribbean and the US; satellite earth station - 1 Intelsat (Atlantic Ocean) (2019)

about 60 media outlets are recognized as national; the Ecuadorian Government controls 12 national outlets and multiple radio stations; there are multiple TV networks and many local channels, as well as more than 300 radio stations; many TV and radio stations are privately owned; broadcast media is required by law to give the government free airtime to broadcast programs produced by the state; the Ecuadorian Government is the biggest advertiser and grants advertising contracts to outlets that provide favorable coverage; an antimonopoly law and communication law limit ownership and investment in the media by non-media businesses (2019)

the International Maritime Bureau continues to report the territorial and offshore waters as at risk for piracy and armed robbery against ships; vessels, including commercial shipping and pleasure craft, have been attacked and hijacked both at anchor and while underway; crews have been robbed and stores or cargoes stolen; after several years with no incidents, there has been an increase over the last two years with four attacks reported in 2018

significant transit country for cocaine originating in Colombia and Peru, with much of the US-bound cocaine passing through Ecuadorian Pacific waters; importer of precursor chemicals used in production of illicit narcotics; attractive location for cash-placement by drug traffickers laundering money because of dollarization and weak anti-money-laundering regime; increased activity on the northern frontier by trafficking groups and Colombian insurgents