The Caroline Islands are a widely scattered archipelago in the western Pacific Ocean; they became part of a UN Trust Territory under US administration following World War II. The eastern four island groups adopted a constitution in 1979 and chose to become the Federated States of Micronesia (FSM). (The westernmost island group became Palau.) Independence came in 1986 under a Compact of Free Association (COFA) with the US, which was amended in 2004. The COFA has been a force for stability and democracy in the FSM since it came into force in 1986. Present concerns include economic uncertainty after 2023 when direct US economic assistance is scheduled to end, large-scale unemployment, overfishing, overdependence on US foreign aid, and state perceptions of inequitable allocation of US aid.As a signatory to the COFA with the US, eligible Micronesians can live, work, and study in any part of the US and its territories without a visa - this privilege reduces stresses on the island economy and the environment. Micronesians serve in the US armed forces and military recruiting from the Federated States of Micronesia, per capita, is higher than many US states.

Oceania, island group in the North Pacific Ocean, about three-quarters of the way from Hawaii to Indonesia

four times the size of Washington, DC (land area only) 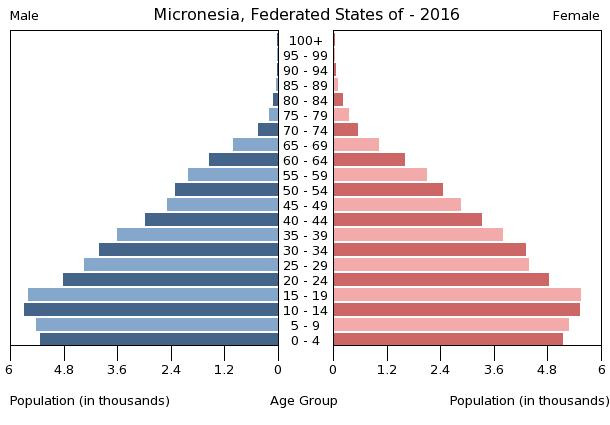 federal republic in free association with the US

3 November 1986 (from the US-administered UN trusteeship)

history: drafted June 1975, ratified 1 October 1978, entered into force 10 May 1979
amendments: proposed by Congress, by a constitutional convention, or by public petition; passage requires approval by at least three-fourths majority vote in at least three fourths of the states; amended 1990; note – at least every 10 years as part of a general or special election, voters are asked whether to hold a constitution convention; a majority of affirmative votes is required to proceed (2018)

citizenship by birth: no
citizenship by descent only: at least one parent must be a citizen of FSM
dual citizenship recognized: no
residency requirement for naturalization: 5 years

name: Patriots of Micronesia
lyrics/music: unknown
note: adopted 1991; also known as "Across All Micronesia"; the music is based on the 1820 German patriotic song "Ich hab mich ergeben", which was the West German national anthem from 1949-1950; variants of this tune are used in Johannes Brahms' "Festival Overture" and Gustav Mahler's "Third Symphony"

Economic activity consists largely of subsistence farming and fishing, and government, which employs two-thirds of the adult working population and receives funding largely - 58% in 2013 – from Compact of Free Association assistance provided by the US. The islands have few commercially valuable mineral deposits. The potential for tourism is limited by isolation, lack of adequate facilities, and limited internal air and water transportation.Under the terms of the original Compact, the US provided $1.3 billion in grants and aid from 1986 to 2001. The US and the Federated States of Micronesia (FSM) negotiated a second (amended) Compact agreement in 2002-03 that took effect in 2004. The amended Compact runs for a 20-year period to 2023; during which the US will provide roughly $2.1 billion to the FSM. The amended Compact also develops a trust fund for the FSM that will provide a comparable income stream beyond 2024 when Compact grants end.The country's medium-term economic outlook appears fragile because of dependence on US assistance and lackluster performance of its small and stagnant private sector.

0 bbl/day
country comparison to the world: 182

no TV broadcast stations; each state has a multi-channel cable service with TV transmissions carrying roughly 95% imported programming and 5% local programming; about a half-dozen radio stations (2009)

Flag of Micronesia, Federated States of