The Gambia gained its independence from the UK in 1965. Geographically surrounded by Senegal, it formed a short-lived Confederation of Senegambia between 1982 and 1989. In 1991, the two nations signed a friendship and cooperation treaty, although tensions flared up intermittently during the regime of Yahya JAMMEH. JAMMEH led a military coup in 1994 that overthrew the president and banned political activity. A new constitution and presidential election in 1996, followed by parliamentary balloting in 1997, completed a nominal return to civilian rule. JAMMEH was elected president in all subsequent elections including most recently in late 2011. After 22 years of increasingly authoritarian rule, President JAMMEH was defeated in free and fair elections in December 2016. Due to The Gambia’s poor human rights record under JAMMEH, international development partners had distanced themselves, and substantially reduced aid to the country. These channels have now reopened under the administration of President Adama BARROW, who took office in January 2017. The US and The Gambia currently enjoy improved relations. US assistance to the country has supported military education and training programs, as well as various capacity building and democracy strengthening activities.

slightly less than twice the size of Delaware

flood plain of the Gambia River flanked by some low hills

almost an enclave of Senegal; smallest country on the African mainland

The Gambia’s youthful age structure – almost 60% of the population is under the age of 25 – is likely to persist because the country’s total fertility rate remains strong at nearly 4 children per woman. The overall literacy rate is around 55%, and is significantly lower for women than for men. At least 70% of the populace are farmers who are reliant on rain-fed agriculture and cannot afford improved seeds and fertilizers. Crop failures caused by droughts between 2011 and 2013 have increased poverty, food shortages, and malnutrition.The Gambia is a source country for migrants and a transit and destination country for migrants and refugees. Since the 1980s, economic deterioration, drought, and high unemployment, especially among youths, have driven both domestic migration (largely urban) and migration abroad (legal and illegal). Emigrants are largely skilled workers, including doctors and nurses, and provide a significant amount of remittances. The top receiving countries for Gambian emigrants are Spain, the US, Nigeria, Senegal, and the UK. While the Gambia and Spain do not share historic, cultural, or trade ties, rural Gambians have migrated to Spain in large numbers because of its proximity and the availability of jobs in its underground economy (this flow slowed following the onset of Spain’s late 2007 economic crisis).The Gambia’s role as a host country to refugees is a result of wars in several of its neighboring West African countries. Since 2006, refugees from the Casamance conflict in Senegal have replaced their pattern of flight and return with permanent settlement in The Gambia, often moving in with relatives along the Senegal-Gambia border. The strain of providing for about 7,400 Casamance refugees has increased poverty among Gambian villagers. 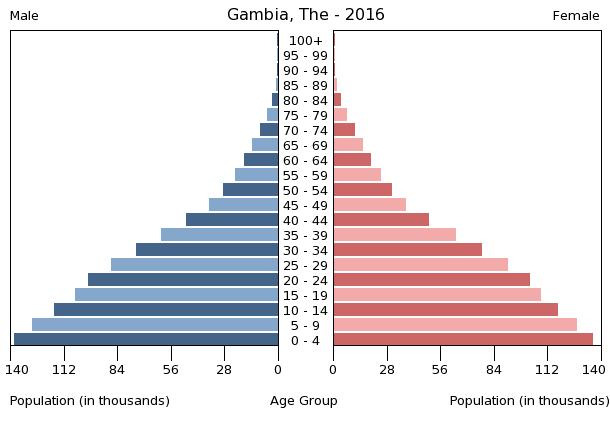 conventional long form: Republic of The Gambia
conventional short form: The Gambia
etymology: named for the Gambia River that flows through the heart of the country

name: Banjul
geographic coordinates: 13 27 N, 16 34 W
time difference: UTC 0 (5 hours ahead of Washington, DC, during Standard Time)
etymology: Banjul is located on Saint Mary's Island at the mouth of the Gambia River; the Mandinka used to gather fibrous plants on the island for the manufacture of ropes; "bang julo" is Mandinka for "rope fiber"; mispronunciation over time caused the term became the word Banjul

history: previous 1965 (Independence Act), 1970; latest adopted 8 April 1996, approved by referendum 8 August 1996, effective 16 January 1997; note - referendum on new constitution planned over the next 2 years
amendments: proposed by the National Assembly; passage requires at least three-fourths majority vote by the Assembly membership in each of several readings and approval by the president of the republic; a referendum is required for amendments affecting national sovereignty, fundamental rights and freedoms, government structures and authorities, taxation, and public funding; passage by referendum requires participation of at least 50% of eligible voters and approval by at least 75% of votes cast; amended 2001, 2004, 2010 (2017)

three equal horizontal bands of red (top), blue with white edges, and green; red stands for the sun and the savannah, blue represents the Gambia River, and green symbolizes forests and agriculture; the white stripes denote unity and peace

name: For The Gambia, Our Homeland
lyrics/music: Virginia Julie HOWE/adapted by Jeremy Frederick HOWE
note: adopted 1965; the music is an adaptation of the traditional Mandinka song "Foday Kaba Dumbuya"

The government has invested in the agriculture sector because three-quarters of the population depends on the sector for its livelihood and agriculture provides for about one-third of GDP, making The Gambia largely reliant on sufficient rainfall. The agricultural sector has untapped potential - less than half of arable land is cultivated and agricultural productivity is low. Small-scale manufacturing activity features the processing of cashews, groundnuts, fish, and hides. The Gambia's reexport trade accounts for almost 80% of goods exports and China has been its largest trade partner for both exports and imports for several years.The Gambia has sparse natural resource deposits. It relies heavily on remittances from workers overseas and tourist receipts. Remittance inflows to The Gambia amount to about one-fifth of the country’s GDP. The Gambia's location on the ocean and proximity to Europe has made it one of the most frequented tourist destinations in West Africa, boosted by private sector investments in eco-tourism and facilities. Tourism normally brings in about 20% of GDP, but it suffered in 2014 from tourists’ fears of Ebola virus in neighboring West African countries. Unemployment and underemployment remain high.Economic progress depends on sustained bilateral and multilateral aid, on responsible government economic management, and on continued technical assistance from multilateral and bilateral donors. International donors and lenders were concerned about the quality of fiscal management under the administration of former President Yahya JAMMEH, who reportedly stole hundreds of millions of dollars of the country’s funds during his 22 years in power, but anticipate significant improvements under the new administration of President Adama BARROW, who assumed power in early 2017. As of April 2017, the IMF, the World Bank, the European Union, and the African Development Bank were all negotiating with the new government of The Gambia to provide financial support in the coming months to ease the country’s financial crisis.The country faces a limited availability of foreign exchange, weak agricultural output, a border closure with Senegal, a slowdown in tourism, high inflation, a large fiscal deficit, and a high domestic debt burden that has crowded out private sector investment and driven interest rates to new highs. The government has committed to taking steps to reduce the deficit, including through expenditure caps, debt consolidation, and reform of state-owned enterprises.

attempts to stem refugees, cross-border raids, arms smuggling, and other illegal activities by separatists from southern Senegal's Casamance region, as well as from conflicts in other west African states

current situation: The Gambia is a source and destination country for women and children subjected to forced labor and sex trafficking; Gambian women, girls, and, to a lesser extent, boys are exploited for prostitution and domestic servitude; women, girls, and boys from West African countries are trafficked to The Gambia for commercial sexual exploitation, particularly by European sex tourists; boys in some Koranic schools are forced into street vending or begging; some Gambian children have been identified as victims of forced labor in neighboring West African countries
tier rating: Tier 3 – The Gambia does not fully comply with the minimum standards for the elimination of trafficking and is not making significant efforts to do so; the government demonstrated minimal anti-trafficking law enforcement efforts, investigating one trafficking case but not prosecuting or convicting any offenders in 2014; authorities did not investigate, prosecute, or convict any government employees complicit in trafficking, although corruption was a serious problem; the government identified and repatriated 19 Gambian girls subjected to domestic servitude in Lebanon but did not identify or provide protective services to any trafficking victims in The Gambia; a government program continued to provide resources and financial support to 12 Koranic schools on the condition that their students were not forced to beg (2015)

Flag of Gambia, The