Formed from the merger of the British colony of the Gold Coast and the Togoland trust territory, Ghana in 1957 became the first sub-Saharan country in colonial Africa to gain its independence. Ghana endured a series of coups before Lt. Jerry RAWLINGS took power in 1981 and banned political parties. After approving a new constitution and restoring multiparty politics in 1992, RAWLINGS won presidential elections in 1992 and 1996 but was constitutionally prevented from running for a third term in 2000. John KUFUOR of the opposition New Patriotic Party (NPP) succeeded him and was reelected in 2004. John Atta MILLS of the National Democratic Congress won the 2008 presidential election and took over as head of state, but he died in July 2012 and was constitutionally succeeded by his vice president, John Dramani MAHAMA, who subsequently won the December 2012 presidential election. In 2016, however, Nana Addo Dankwa AKUFO-ADDO of the NPP defeated MAHAMA, marking the third time that the Ghana’s presidency has changed parties since the return to democracy.

Western Africa, bordering the Gulf of Guinea, between Cote d'Ivoire and Togo

tropical; warm and comparatively dry along southeast coast; hot and humid in southwest; hot and dry in north

Lake Volta is the world's largest artificial lake (manmade reservoir) by surface area (8,482 sq km; 3,275 sq mi); the lake was created following the completion of the Akosombo Dam in 1965, which holds back the White Volta and Black Volta Rivers

28,102,471 (July 2018 est.)
note: estimates for this country explicitly take into account the effects of excess mortality due to AIDS; this can result in lower life expectancy, higher infant mortality, higher death rates, lower population growth rates, and changes in the distribution of population by age and sex than would otherwise be expected
country comparison to the world: 49

Ghana has a young age structure, with approximately 57% of the population under the age of 25. Its total fertility rate fell significantly during the 1980s and 1990s but has stalled at around four children per woman for the last few years. Fertility remains higher in the northern region than the Greater Accra region. On average, desired fertility has remained stable for several years; urban dwellers want fewer children than rural residents. Increased life expectancy, due to better health care, nutrition, and hygiene, and reduced fertility have increased Ghana’s share of elderly persons; Ghana’s proportion of persons aged 60+ is among the highest in sub-Saharan Africa. Poverty has declined in Ghana, but it remains pervasive in the northern region, which is susceptible to droughts and floods and has less access to transportation infrastructure, markets, fertile farming land, and industrial centers. The northern region also has lower school enrollment, higher illiteracy, and fewer opportunities for women.Ghana was a country of immigration in the early years after its 1957 independence, attracting labor migrants largely from Nigeria and other neighboring countries to mine minerals and harvest cocoa – immigrants composed about 12% of Ghana’s population in 1960. In the late 1960s, worsening economic and social conditions discouraged immigration, and hundreds of thousands of immigrants, mostly Nigerians, were expelled.During the 1970s, severe drought and an economic downturn transformed Ghana into a country of emigration; neighboring Cote d’Ivoire was the initial destination. Later, hundreds of thousands of Ghanaians migrated to Nigeria to work in its booming oil industry, but most were deported in 1983 and 1985 as oil prices plummeted. Many Ghanaians then turned to more distant destinations, including other parts of Africa, Europe, and North America, but the majority continued to migrate within West Africa. Since the 1990s, increased emigration of skilled Ghanaians, especially to the US and the UK, drained the country of its health care and education professionals. Internally, poverty and other developmental disparities continue to drive Ghanaians from the north to the south, particularly to its urban centers. 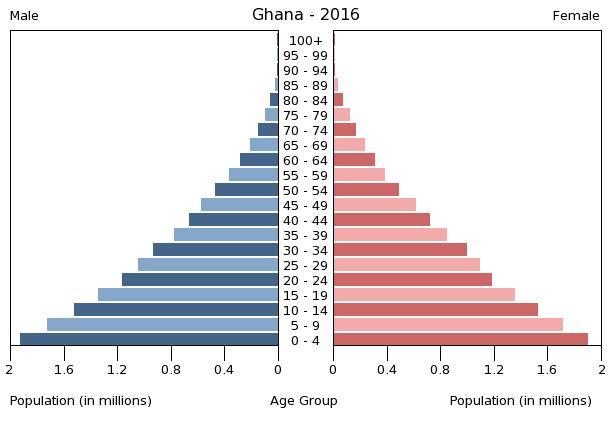 name: Accra
geographic coordinates: 5 33 N, 0 13 W
time difference: UTC 0 (5 hours ahead of Washington, DC, during Standard Time)
etymology: the name derives from the Akan word "nkran" meaning "ants," and refers to the numerous anthills in the area around the capital

history: several previous; latest drafted 31 March 1992, approved and promulgated 28 April 1992, entered into force 7 January 1993
amendments: proposed by Parliament; consideration requires prior referral to the Council of State, a body of prominent citizens who advise the president of the republic; passage of amendments to "entrenched" constitutional articles (including those on national sovereignty, fundamental rights and freedoms, the structure and authorities of the branches of government, and amendment procedures) requires approval in a referendum by at least 40% participation of eligible voters and at least 75% of votes cast, followed by at least two-thirds majority vote in Parliament, and assent of the president; amendments to non-entrenched articles do not require referenda; amended 1996 (2017)

citizenship by birth: no
citizenship by descent only: at least one parent or grandparent must be a citizen of Ghana
dual citizenship recognized: yes
residency requirement for naturalization: 5 years

highest courts: Supreme Court (consists of the chief justice and 12 justices)
judge selection and term of office: chief justice appointed by the president in consultation with the Council of State (a small advisory body of prominent citizens) and with the approval of Parliament; other justices appointed by the president upon the advice of the Judicial Council (an 18-member independent body of judicial, military and police officials, and presidential nominees) and on the advice of the Council of State; justices can retire at age 60, with compulsory retirement at age 70
subordinate courts: Court of Appeal; High Court; Circuit Court; District Court; regional tribunals

note: Ghana has more than 20 registered parties; included are 5 of the more popular parties as of May 2017

three equal horizontal bands of red (top), yellow, and green, with a large black five-pointed star centered in the yellow band; red symbolizes the blood shed for independence, yellow represents the country's mineral wealth, while green stands for its forests and natural wealth; the black star is said to be the lodestar of African freedom
note: uses the popular Pan-African colors of Ethiopia; similar to the flag of Bolivia, which has a coat of arms centered in the yellow band

name: God Bless Our Homeland Ghana
lyrics/music: unknown/Philip GBEHO
note: music adopted 1957, lyrics adopted 1966; the lyrics were changed twice, in 1960 when a republic was declared and after a 1966 coup

Ghana has a market-based economy with relatively few policy barriers to trade and investment in comparison with other countries in the region, and Ghana is endowed with natural resources. Ghana's economy was strengthened by a quarter century of relatively sound management, a competitive business environment, and sustained reductions in poverty levels, but in recent years has suffered the consequences of loose fiscal policy, high budget and current account deficits, and a depreciating currency.Agriculture accounts for about 20% of GDP and employs more than half of the workforce, mainly small landholders. Gold, oil, and cocoa exports, and individual remittances, are major sources of foreign exchange. Expansion of Ghana’s nascent oil industry has boosted economic growth, but the fall in oil prices since 2015 reduced by half Ghana’s oil revenue. Production at Jubilee, Ghana's first commercial offshore oilfield, began in mid-December 2010. Production from two more fields, TEN and Sankofa, started in 2016 and 2017 respectively. The country’s first gas processing plant at Atuabo is also producing natural gas from the Jubilee field, providing power to several of Ghana’s thermal power plants.As of 2018, key economic concerns facing the government include the lack of affordable electricity, lack of a solid domestic revenue base, and the high debt burden. The AKUFO-ADDO administration has made some progress by committing to fiscal consolidation, but much work is still to be done. Ghana signed a $920 million extended credit facility with the IMF in April 2015 to help it address its growing economic crisis. The IMF fiscal targets require Ghana to reduce the deficit by cutting subsidies, decreasing the bloated public sector wage bill, strengthening revenue administration, boosting tax revenues, and improving the health of Ghana’s banking sector. Priorities for the new administration include rescheduling some of Ghana’s $31 billion debt, stimulating economic growth, reducing inflation, and stabilizing the currency. Prospects for new oil and gas production and follow through on tighter fiscal management are likely to help Ghana’s economy in 2018.

18-26 years of age for voluntary military service, with basic education certificate; no conscription; must be HIV/AIDS negative (2012)

West African piracy more than doubled in 2018 to become the most dangerous area in the World; the waters off of Ghana saw a dramatic increase with 10 attacks reported in 2018 compared with only one in 2017; eight ships were boarded, one hijacked, and 47 crew taken hostage or kidnapped

current situation: Ghana is a source, transit, and destination country for men, women, and children subjected to forced labor and sex trafficking; the trafficking of Ghanians, particularly children, internally is more common than the trafficking of foreign nationals; Ghanian children are subjected to forced labor in fishing, domestic service, street hawking, begging, portering, mining, quarrying, herding, and agriculture, with girls, and to a lesser extent boys, forced into prostitution; Ghanian women, sometimes lured with legitimate job offers, and girls are sex trafficked in West Africa, the Middle East, and Europe; Ghanian men fraudulently recruited for work in the Middle East are subjected to forced labor or prostitution, and a few Ghanian adults have been identified as victims of false labor in the US; women and girls from Vietnam, China, and neighboring West African countries are sex trafficked in Ghana; the country is also a transit point for sex trafficking from West Africa to Europe
tier rating: Tier 2 Watch List - Ghana does not fully comply with the minimum standards for the elimination of trafficking; however, it is making significant efforts to do so; Ghana continued to investigate and prosecute trafficking offenses but was unable to ramp up its anti-trafficking efforts in 2014 because the government failed to provide law enforcement or protection agencies with operating budgets; victim protection efforts decreased in 2014, with significantly fewer victims identified; most child victims were referred to NGO-run facilities, but care for adults was lacking because the government did not provide any support to the country’s Human Trafficking Fund for victim services or its two shelters; anti-trafficking prevention measures increased modestly, including reconvening of the Human Trafficking Management Board, public awareness campaigns on child labor and trafficking, and anti-trafficking TV and radio programs (2015)

illicit producer of cannabis for the international drug trade; major transit hub for Southwest and Southeast Asian heroin and, to a lesser extent, South American cocaine destined for Europe and the US; widespread crime and money-laundering problem, but the lack of a well-developed financial infrastructure limits the country's utility as a money-laundering center; significant domestic cocaine and cannabis use