Spain ceded Guam to the US in 1898. Captured by the Japanese in 1941, it was retaken by the US three years later. The military installations on the island are some of the most strategically important US bases in the Pacific; they also constitute the island’s most important source of income and economic stability.

Oceania, island in the North Pacific Ocean, about three-quarters of the way from Hawaii to the Philippines

largest and southernmost island in the Mariana Islands archipelago and the largest island in Micronesia; strategic location in western North Pacific Ocean 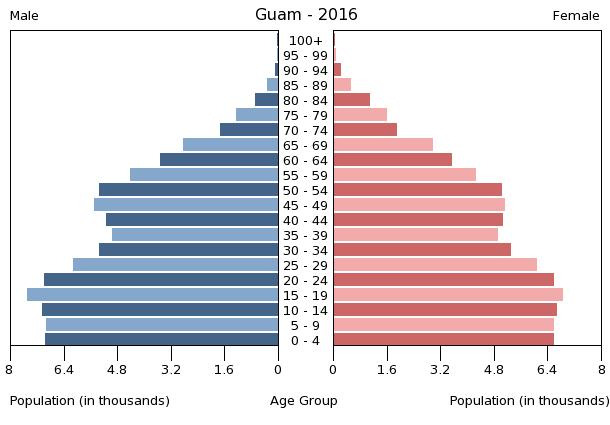 unincorporated organized territory of the US with policy relations between Guam and the federal government under the jurisdiction of the Office of Insular Affairs, US Department of the Interior

name: Hagatna (Agana)
geographic coordinates: 13 28 N, 144 44 E
time difference: UTC+10 (15 hours ahead of Washington, DC, during Standard Time)
etymology: the name is derived from the Chamoru word "haga," meaning "blood", and may refer to the bloodlines of the various families that established the original settlement

common law modeled on US system; US federal laws apply

18 years of age; universal; note - Guamanians are US citizens but do not vote in US presidential elections

chief of state: President Donald J. TRUMP (since 20 January 2017); Vice President Michael R. PENCE (since 20 January 2017)
head of government: Governor Lourdes LEON GUERRERO (since 7 January 2019); Lieutenant Governor Josh TENORIO (since 7 January 2019)
cabinet: Cabinet appointed by the governor with the consent of the Legislature
elections/appointments: president and vice president indirectly elected on the same ballot by an Electoral College of 'electors' chosen from each state to serve a 4-year term (eligible for a second term); under the US Constitution, residents of unincorporated territories, such as Guam, do not vote in elections for US president and vice president; however, they may vote in Democratic and Republican presidential primary elections; governor and lieutenant governor elected on the same ballot by absolute majority vote in 2 rounds if needed for a 4-year term (eligible for 2 consecutive terms); election last held on 6 November 2018 (next to be held in November 2022)
election results: Lourdes LEON GUERRERO elected governor; percent of vote -  Lourdes LEON GUERRERO (Democratic Party) 50.7%, Ray TENORIO (Republican Party) 26.4%; Josh TENORIO (Democratic Party) elected lieutenant governor

territorial flag is dark blue with a narrow red border on all four sides; centered is a red-bordered, pointed, vertical ellipse containing a beach scene, a proa or outrigger canoe with sail, and a palm tree with the word GUAM superimposed in bold red letters; the proa is sailing in Agana Bay with the promontory of Punta Dos Amantes, near the capital, in the background; the shape of the central emblem is that of a Chamorro sling stone, used as a weapon for defense or hunting; blue represents the sea and red the blood shed in the struggle against oppression
note: the US flag is the national flag

US national defense spending is the main driver of Guam’s economy, followed closely by tourism and other services. Guam serves as a forward US base for the Western Pacific and is home to thousands of American military personnel. Total federal spending (defense and non-defense) amounted to $1.988 billion in 2016, or 34.2 of Guam’s GDP. Of that total, federal grants and cover-over payments amounted to $3444.1 million in 2016, or 35.8% of Guam’s total revenues for the fiscal year. In 2016, Guam’s economy grew 0.3%. Despite slow growth, Guam’s economy has been stable over the last decade. National defense spending cushions the island’s economy against fluctuations in tourism. Service exports, mainly spending by foreign tourists in Guam, amounted to over $1 billion for the first time in 2016, or 17.8% of GDP.

general assessment: modern system, integrated with US facilities for direct dialing, including free use of 800 numbers (2018)
domestic: three major companies provide both fixed-line and mobile services, as well as access to the Internet; fixed-line 42 per 100 and 113 per 100 for mobile-cellular (2018)
international: country code - 1-671; major landing points for Atisa, HANTRU1, HK-G, JGA-N, JGA-S, PIPE-1, SEA-US, SxS, Tata TGN-Pacific, AJC, GOKI, AAG, AJC and Mariana-Guam Cable submarine cables between Asia, Australia, and the US (Guam is a transpacific communications hub for major carriers linking the US and Asia); satellite earth stations - 2 Intelsat (Pacific Ocean) (2019)