Greece achieved independence from the Ottoman Empire in 1830. During the second half of the 19th century and the first half of the 20th century, it gradually added neighboring islands and territories, most with Greek-speaking populations. In World War II, Greece was first invaded by Italy (1940) and subsequently occupied by Germany (1941-44); fighting endured in a protracted civil war between supporters of the king and other anti-communist and communist rebels. Following the latter's defeat in 1949, Greece joined NATO in 1952. In 1967, a group of military officers seized power, establishing a military dictatorship that suspended many political liberties and forced the king to flee the country. In 1974 following the collapse of the dictatorship, democratic elections and a referendum created a parliamentary republic and abolished the monarchy. In 1981, Greece joined the EC (now the EU); it became the 12th member of the European Economic and Monetary Union (EMU) in 2001. Greece has suffered a severe economic crisis since late 2009, due to nearly a decade of chronic overspending and structural rigidities. Beginning in 2010, Greece entered three bailout agreements - with the European Commission, the European Central Bank (ECB), the IMF, and the third in 2015 with the European Stability Mechanism (ESM) - worth in total about $300 billion. The Greek Government formally exited the third bailout in August 2018.

Southern Europe, bordering the Aegean Sea, Ionian Sea, and the Mediterranean Sea, between Albania and Turkey

one-third of the population lives in and around metropolitan Athens; the remainder of the country has moderate population density mixed with sizeable urban clusters

severe earthquakes volcanism: Santorini (367 m) has been deemed a Decade Volcano by the International Association of Volcanology and Chemistry of the Earth's Interior, worthy of study due to its explosive history and close proximity to human populations; although there have been very few eruptions in recent centuries, Methana and Nisyros in the Aegean are classified as historically active

strategic location dominating the Aegean Sea and southern approach to Turkish Straits; a peninsular country, possessing an archipelago of about 2,000 islands 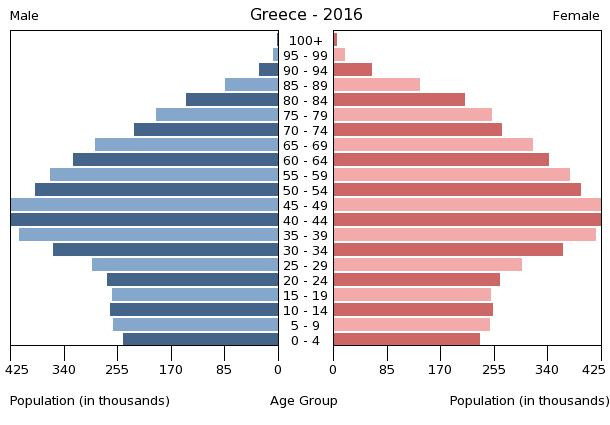 one-third of the population lives in and around metropolitan Athens; the remainder of the country has moderate population density mixed with sizeable urban clusters

name: Athens
geographic coordinates: 37 59 N, 23 44 E
time difference: UTC+2 (7 hours ahead of Washington, DC, during Standard Time)
daylight saving time: +1hr, begins last Sunday in March; ends last Sunday in October
etymology: according to tradition, the city is named after Athena, the Greek goddess of wisdom; in actuality, the appellation probably derives from a lost name in a pre-Hellenic language

3 February 1830 (from the Ottoman Empire); note - 25 March 1821, outbreak of the national revolt against the Ottomans; 3 February 1830, signing of the London Protocol recognizing Greek independence by Great Britain, France, and Russia

history: many previous; latest entered into force 11 June 1975
amendments: proposed by at least 50 members of Parliament and agreed by three-fifths majority vote in two separate ballots at least 30 days apart; passage requires absolute majority vote by the next elected Parliament; entry into force finalized through a "special parliamentary resolution"; articles on human rights and freedoms and the form of government cannot be amended; amended 1986, 2001, 2008 (2016)

citizenship by birth: no
citizenship by descent only: at least one parent must be a citizen of Greece
dual citizenship recognized: yes
residency requirement for naturalization: 10 years

17 years of age; universal and compulsory

chief of state: President Prokopios (Prokopis) PAVLOPOULOS (since 13 March 2015)
head of government: Prime Minister Kyriakos MITSOTAKIS (since 8 July 2019)
cabinet: Cabinet appointed by the president on the recommendation of the prime minister
elections/appointments: president elected by Hellenic Parliament for a 5-year term (eligible for a second term); election last held on 18 February 2015 (next to be held by February 2020); president appoints as prime minister the leader of the majority party or coalition in the Hellenic Parliament
election results: Prokopios PAVLOPOULOS (ND) elected president by Parliament - 233 of 300 votes

highest courts: Supreme Civil and Criminal Court or Areios Pagos (consists of 56 judges, including the court presidents); Council of State (supreme administrative court) (consists of the president, 7 vice presidents, 42 privy councilors, 48 associate councilors and 50 reporting judges, organized into six 5- and 7-member chambers; Court of Audit (government audit and enforcement) consists of the president, 5 vice presidents, 20 councilors, and 90 associate and reporting judges
judge selection and term of office: Supreme Court judges appointed by presidential decree on the advice of the Supreme Judicial Council (SJC), which includes the president of the Supreme Court, other judges, and the prosecutor of the Supreme Court; judges appointed for life following a 2-year probationary period; Council of State president appointed by the Greek Cabinet to serve a 4-year term; other judge appointments and tenure NA; Court of Audit president appointed by decree of the president of the republic on the advice of the SJC; court president serves a 4-year term or until age 67; tenure of vice presidents, councilors, and judges NA
subordinate courts: Courts of Appeal and Courts of First Instance (district courts)

nine equal horizontal stripes of blue alternating with white; a blue square bearing a white cross appears in the upper hoist-side corner; the cross symbolizes Greek Orthodoxy, the established religion of the country; there is no agreed upon meaning for the nine stripes or for the colors
note: Greek legislation states that the flag colors are cyan and white, but cyan can mean "blue" in Greek, so the exact shade of blue has never been set and has varied from a light to a dark blue over time; in general, the hue of blue normally encountered is a form of azure

name: "Ymnos eis tin Eleftherian" (Hymn to Liberty)
lyrics/music: Dionysios SOLOMOS/Nikolaos MANTZAROS
note: adopted 1864; the anthem is based on a 158-stanza poem by the same name, which was inspired by the Greek Revolution of 1821 against the Ottomans (only the first two stanzas are used); Cyprus also uses "Hymn to Liberty" as its anthem

Greece has a capitalist economy with a public sector accounting for about 40% of GDP and with per capita GDP about two-thirds that of the leading euro-zone economies. Tourism provides 18% of GDP. Immigrants make up nearly one-fifth of the work force, mainly in agricultural and unskilled jobs. Greece is a major beneficiary of EU aid, equal to about 3.3% of annual GDP.The Greek economy averaged growth of about 4% per year between 2003 and 2007, but the economy went into recession in 2009 as a result of the world financial crisis, tightening credit conditions, and Athens' failure to address a growing budget deficit. By 2013, the economy had contracted 26%, compared with the pre-crisis level of 2007. Greece met the EU's Growth and Stability Pact budget deficit criterion of no more than 3% of GDP in 2007-08, but violated it in 2009, when the deficit reached 15% of GDP. Deteriorating public finances, inaccurate and misreported statistics, and consistent underperformance on reforms prompted major credit rating agencies to downgrade Greece's international debt rating in late 2009 and led the country into a financial crisis. Under intense pressure from the EU and international market participants, the government accepted a bailout program that called on Athens to cut government spending, decrease tax evasion, overhaul the civil-service, health-care, and pension systems, and reform the labor and product markets. Austerity measures reduced the deficit to 1.3% in 2017. Successive Greek governments, however, failed to push through many of the most unpopular reforms in the face of widespread political opposition, including from the country's powerful labor unions and the general public.In April 2010, a leading credit agency assigned Greek debt its lowest possible credit rating, and in May 2010, the IMF and euro-zone governments provided Greece emergency short- and medium-term loans worth $147 billion so that the country could make debt repayments to creditors. Greece, however, struggled to meet the targets set by the EU and the IMF, especially after Eurostat - the EU's statistical office - revised upward Greece's deficit and debt numbers for 2009 and 2010. European leaders and the IMF agreed in October 2011 to provide Athens a second bailout package of $169 billion. The second deal called for holders of Greek government bonds to write down a significant portion of their holdings to try to alleviate Greece’s government debt burden. However, Greek banks, saddled with a significant portion of sovereign debt, were adversely affected by the write down and $60 billion of the second bailout package was set aside to ensure the banking system was adequately capitalized.In 2014, the Greek economy began to turn the corner on the recession. Greece achieved three significant milestones: balancing the budget - not including debt repayments; issuing government debt in financial markets for the first time since 2010; and generating 0.7% GDP growth — the first economic expansion since 2007.Despite the nascent recovery, widespread discontent with austerity measures helped propel the far-left Coalition of the Radical Left (SYRIZA) party into government in national legislative elections in January 2015. Between January and July 2015, frustrations grew between the SYRIZA-led government and Greece’s EU and IMF creditors over the implementation of bailout measures and disbursement of funds. The Greek government began running up significant arrears to suppliers, while Greek banks relied on emergency lending, and Greece’s future in the euro zone was called into question. To stave off a collapse of the banking system, Greece imposed capital controls in June 2015, then became the first developed nation to miss a loan payment to the IMF, rattling international financial markets. Unable to reach an agreement with creditors, Prime Minister Alexios TSIPRAS held a nationwide referendum on 5 July on whether to accept the terms of Greece’s bailout, campaigning for the ultimately successful "no" vote. The TSIPRAS government subsequently agreed, however, to a new $96 billion bailout in order to avert Greece’s exit from the monetary bloc. On 20 August 2015, Greece signed its third bailout, allowing it to cover significant debt payments to its EU and IMF creditors and to ensure the banking sector retained access to emergency liquidity. The TSIPRAS government — which retook office on 20 September 2015 after calling new elections in late August — successfully secured disbursal of two delayed tranches of bailout funds. Despite the economic turmoil, Greek GDP did not contract as sharply as feared, boosted in part by a strong tourist season.In 2017, Greece saw improvements in GDP and unemployment. Unfinished economic reforms, a massive non-performing loan problem, and ongoing uncertainty regarding the political direction of the country hold the economy back. Some estimates put Greece’s black market at 20- to 25% of GDP, as more people have stopped reporting their income to avoid paying taxes that, in some cases, have risen to 70% of an individual’s gross income.

$106.6 billion (31 December 2017 est.)
$86.53 billion (31 December 2016 est.)
note: see entry for the European Union for money supply for the entire euro area; the European Central Bank (ECB) controls monetary policy for the 18 members of the Economic and Monetary Union (EMU); individual members of the EMU do not control the quantity of money circulating within their own borders
country comparison to the world: 39

Revolutionary Struggle (RS): aim(s): disrupt the influence of globalization and international capitalism on Greek society and, ultimately, overthrow the Greek Government
area(s) of operation: operates exclusively inside Greece, primarily in Athens
note: largely inactive in recent years, with the exception of shootouts with police officers trying to arrest members (2018)

Greece and Turkey continue discussions to resolve their complex maritime, air, territorial, and boundary disputes in the Aegean Sea; the mass migration of unemployed Albanians still remains a problem for developed countries, chiefly Greece and Italy

a gateway to Europe for traffickers smuggling cannabis and heroin from the Middle East and Southwest Asia to the West and precursor chemicals to the East; some South American cocaine transits or is consumed in Greece; money laundering related to drug trafficking and organized crime