The Maya civilization flourished in Guatemala and surrounding regions during the first millennium A.D. After almost three centuries as a Spanish colony, Guatemala won its independence in 1821. During the second half of the 20th century, it experienced a variety of military and civilian governments, as well as a 36-year guerrilla war. In 1996, the government signed a peace agreement formally ending the internal conflict.

Central America, bordering the North Pacific Ocean, between El Salvador and Mexico, and bordering the Gulf of Honduras (Caribbean Sea) between Honduras and Belize

numerous volcanoes in mountains, with occasional violent earthquakes; Caribbean coast extremely susceptible to hurricanes and other tropical storms volcanism: significant volcanic activity in the Sierra Madre range; Santa Maria (3,772 m) has been deemed a Decade Volcano by the International Association of Volcanology and Chemistry of the Earth's Interior, worthy of study due to its explosive history and close proximity to human populations; Pacaya (2,552 m), which erupted in May 2010 causing an ashfall on Guatemala City and prompting evacuations, is one of the country's most active volcanoes with frequent eruptions since 1965; other historically active volcanoes include Acatenango, Almolonga, Atitlan, Fuego, and Tacana; see note 2 under "Geography - note"

note 1: despite having both eastern and western coastlines (Caribbean Sea and Pacific Ocean respectively), there are no natural harbors on the west coast note 2: Guatemala is one of the countries along the Ring of Fire, a belt of active volcanoes and earthquake epicenters bordering the Pacific Ocean; up to 90% of the world's earthquakes and some 75% of the world's volcanoes occur within the Ring of Fire

Guatemala is a predominantly poor country that struggles in several areas of health and development, including infant, child, and maternal mortality, malnutrition, literacy, and contraceptive awareness and use. The country's large indigenous population is disproportionately affected. Guatemala is the most populous country in Central America and has the highest fertility rate in Latin America. It also has the highest population growth rate in Latin America, which is likely to continue because of its large reproductive-age population and high birth rate. Almost half of Guatemala's population is under age 19, making it the youngest population in Latin America. Guatemala's total fertility rate has slowly declined during the last few decades due in part to limited government-funded health programs. However, the birth rate is still more close to three children per woman and is markedly higher among its rural and indigenous populations.Guatemalans have a history of emigrating legally and illegally to Mexico, the United States, and Canada because of a lack of economic opportunity, political instability, and natural disasters. Emigration, primarily to the United States, escalated during the 1960 to 1996 civil war and accelerated after a peace agreement was signed. Thousands of Guatemalans who fled to Mexico returned after the war, but labor migration to southern Mexico continues. 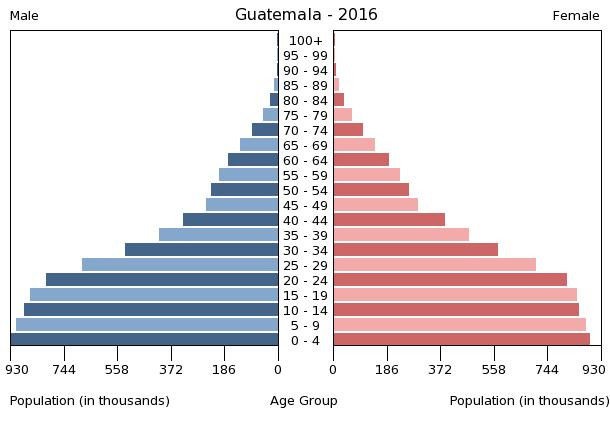 conventional long form: Republic of Guatemala
conventional short form: Guatemala
local long form: Republica de Guatemala
local short form: Guatemala
etymology: the Spanish conquistadors used many native Americans as allies in their conquest of Guatemala; the site of their first capital (established in 1524), a former Maya settlement, was called "Quauhtemallan" by their Nahuatl-speaking Mexican allies, a name that means "land of trees" or "forested land", but which the Spanish pronounced "Guatemala"; the Spanish applied that name to a re founded capital city three years later and eventually it became the name of the country

name: Guatemala City
geographic coordinates: 14 37 N, 90 31 W
time difference: UTC-6 (1 hour behind Washington, DC, during Standard Time)
etymology: the Spanish conquistadors used many native Americans as allies in their conquest of Guatemala; the site of their first capital (established in 1524), a former Maya settlement, was called "Quauhtemallan" by their Nahuatl-speaking Mexican allies, a name that means "land of trees" or "forested land", but which the Spanish pronounced "Guatemala"; the Spanish applied that name to a re founded capital city three years later and eventually it became the name of the country

history: several previous; latest adopted 31 May 1985, effective 14 January 1986; suspended and reinstated in 1994
amendments: proposed by the president of the republic, by agreement of 10 or more deputies of Congress, by the Constitutional Court, or by public petition of at least 5,000 citizens; passage requires at least two-thirds majority vote by the Congress membership and approval by public referendum, referred to as "popular consultation"; constitutional articles such as national sovereignty, the republican form of government, limitations on those seeking the presidency, or presidential tenure cannot be amended; amended 1994 (2018)

citizenship by birth: yes
citizenship by descent only: yes
dual citizenship recognized: yes
residency requirement for naturalization: 5 years with no absences of six consecutive months or longer or absences totaling more than a year

18 years of age; universal; note - active duty members of the armed forces and police by law cannot vote and are restricted to their barracks on election day

highest courts: Supreme Court of Justice or Corte Suprema de Justicia (consists of 13 magistrates, including the court president and organized into 3 chambers); note - the court president also supervises trial judges countrywide; Constitutional Court or Corte de Constitucionalidad (consists of 5 titular magistrates and 5 substitute magistrates)
judge selection and term of office: Supreme Court magistrates elected by the Congress of the Republic from candidates proposed by the Postulation Committee, an independent body of deans of the country's university law schools, representatives of the country's law associations, and representatives of the Courts of Appeal; magistrates elected for concurrent, renewable 5-year terms; Constitutional Court judges - 1 elected by the Congress of the Republic, 1 by the Supreme Court, 1 by the president of the republic, 1 by the (public) University of San Carlos, and 1 by the Assembly of the College of Attorneys and Notaries; judges elected for renewable, consecutive 5-year terms; the presidency of the court rotates among the magistrates for a single 1-year term
subordinate courts: numerous first instance and appellate courts

three equal vertical bands of light blue (hoist side), white, and light blue, with the coat of arms centered in the white band; the coat of arms includes a green and red quetzal (the national bird) representing liberty and a scroll bearing the inscription LIBERTAD 15 DE SEPTIEMBRE DE 1821 (the original date of independence from Spain) all superimposed on a pair of crossed rifles signifying Guatemala's willingness to defend itself and a pair of crossed swords representing honor and framed by a laurel wreath symbolizing victory; the blue bands represent the Pacific Ocean and Caribbean Sea; the white band denotes peace and purity
note: one of only two national flags featuring a firearm, the other is Mozambique

Guatemala is the most populous country in Central America with a GDP per capita roughly half the average for Latin America and the Caribbean. The agricultural sector accounts for 13.5% of GDP and 31% of the labor force; key agricultural exports include sugar, coffee, bananas, and vegetables. Guatemala is the top remittance recipient in Central America as a result of Guatemala's large expatriate community in the US. These inflows are a primary source of foreign income, equivalent to two-thirds of the country's exports and about a tenth of its GDP.The 1996 peace accords, which ended 36 years of civil war, removed a major obstacle to foreign investment, and Guatemala has since pursued important reforms and macroeconomic stabilization. The Dominican Republic-Central America Free Trade Agreement (CAFTA-DR) entered into force in July 2006, spurring increased investment and diversification of exports, with the largest increases in ethanol and non-traditional agricultural exports. While CAFTA-DR has helped improve the investment climate, concerns over security, the lack of skilled workers, and poor infrastructure continue to hamper foreign direct investment.The distribution of income remains highly unequal with the richest 20% of the population accounting for more than 51% of Guatemala's overall consumption. More than half of the population is below the national poverty line, and 23% of the population lives in extreme poverty. Poverty among indigenous groups, which make up more than 40% of the population, averages 79%, with 40% of the indigenous population living in extreme poverty. Nearly one-half of Guatemala's children under age five are chronically malnourished, one of the highest malnutrition rates in the world.

general assessment: fairly modern network centered in the city of Guatemala; one of the lowest teledensities in the region especially in the country; state-owned telecommunications company privatized in the late 1990s opened the way for competition; steady improvement of fixed-line which has also spurred growth in mobile-cellular and broadband; open regulatory framework coupled with competion and greater disposable household revenue spurs growth (2018)
domestic: fixed-line teledensity roughly 15 per 100 persons; fixed-line investments are being concentrated on improving rural connectivity; mobile-cellular teledensity about 129 per 100 persons (2018)
international: country code - 502; landing points for the ARCOS, AMX-1, American Movil-Texius West Coast Cable and the SAm-1 fiber-optic submarine cable system that, together, provide connectivity to South and Central America, parts of the Caribbean, and the US; connected to Central American Microwave System; satellite earth station - 1 Intelsat (Atlantic Ocean) (2019)

all male citizens between the ages of 18 and 50 are eligible for military service; in practice, most of the force is volunteer, however, a selective draft system is employed, resulting in a small portion of 17-21 year-olds conscripted; conscript service obligation varies from 1 to 2 years; women can serve as officers (2013)

annual ministerial meetings under the Organization of American States-initiated Agreement on the Framework for Negotiations and Confidence Building Measures continue to address Guatemalan land and maritime claims in Belize and the Caribbean Sea; Guatemala persists in its territorial claim to half of Belize, but agrees to Line of Adjacency to keep Guatemalan squatters out of Belize's forested interior; both countries agreed in April 2012 to hold simultaneous referenda, scheduled for 6 October 2013, to decide whether to refer the dispute to the ICJ for binding resolution, but this vote was suspended indefinitely; Mexico must deal with thousands of impoverished Guatemalans and other Central Americans who cross the porous border looking for work in Mexico and the US

major transit country for cocaine and heroin; it is estimated that 1,000 mt of cocaine are smuggled through the country each year, primarily destined for the US market; in 2016, the Guatamalan government estimated that an average of 4,500 hectares of opium poppy were being cultivated; marijuana cultivation for mostly domestic consumption; proximity to Mexico makes Guatemala a major staging area for drugs (particularly for cocaine); money laundering is a serious problem; corruption is a major problem