An independent kingdom for much of its long history, Korea was occupied by Japan beginning in 1905 following the Russo-Japanese War. In 1910, Tokyo formally annexed the entire Peninsula. Korea regained its independence following Japan's surrender to the US in 1945. After World War II, a democratic government (Republic of Korea, ROK) was set up in the southern half of the Korean Peninsula while a communist-style government was installed in the north (Democratic People's Republic of Korea, DPRK). During the Korean War (1950-53), US troops and UN forces fought alongside ROK soldiers to defend South Korea from a DPRK invasion supported by communist China and the Soviet Union. A 1953 armistice split the Peninsula along a demilitarized zone at about the 38th parallel. PARK Chung-hee took over leadership of the country in a 1961 coup. During his regime, from 1961 to 1979, South Korea achieved rapid economic growth, with per capita income rising to roughly 17 times the level of North Korea in 1979.South Korea held its first free presidential election under a revised democratic constitution in 1987, with former ROK Army general ROH Tae-woo winning a close race. In 1993, KIM Young-sam (1993-98) became the first civilian president of South Korea's new democratic era. President KIM Dae-jung (1998-2003) won the Nobel Peace Prize in 2000 for his contributions to South Korean democracy and his "Sunshine" policy of engagement with North Korea. President PARK Geun-hye, daughter of former ROK President PARK Chung-hee, took office in February 2013 as South Korea's first female leader. In December 2016, the National Assembly passed an impeachment motion against President PARK over her alleged involvement in a corruption and influence-peddling scandal, immediately suspending her presidential authorities. The impeachment was upheld in March 2017, triggering an early presidential election in May 2017 won by MOON Jae-in. South Korea hosted the Winter Olympic and Paralympic Games in February 2018, in which North Korea also participated. Discord with North Korea has permeated inter-Korean relations for much of the past decade, highlighted by the North's attacks on a South Korean ship and island in 2010, the exchange of artillery fire across the DMZ in 2015, and multiple nuclear and missile tests in 2016 and 2017. North Korea’s participation in the Winter Olympics, dispatch of a senior delegation to Seoul, and three inter-Korean summits in 2018 appear to have ushered in a temporary period of respite, buoyed by the historic US-DPRK summits in 2018 and 2019.

Eastern Asia, southern half of the Korean Peninsula bordering the Sea of Japan and the Yellow Sea

temperate, with rainfall heavier in summer than winter; cold winters

occasional typhoons bring high winds and floods; low-level seismic activity common in southwest volcanism: Halla (1,950 m) is considered historically active although it has not erupted in many centuries

strategic location on Korea Strait; about 3,000 mostly small and uninhabited islands lie off the western and southern coasts 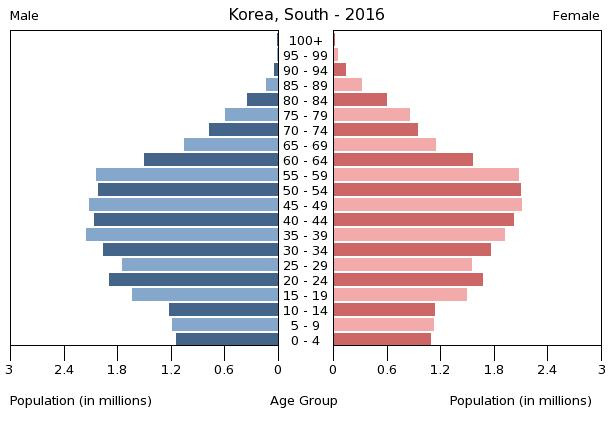 conventional long form: Republic of Korea
conventional short form: South Korea
local long form: Taehan-min'guk
local short form: Han'guk
abbreviation: ROK
etymology: derived from the Chinese name for Goryeo, which was the Korean dynasty that united the peninsula in the 10th century A.D.; the South Korean name "Han'guk" derives from the long form, "Taehan-min'guk," which is itself a derivation from "Daehan-je'guk," which means "the Great Empire of the Han"; "Han" refers to the "Sam'han" or the "Three Han Kingdoms" (Goguryeo, Baekje, and Silla from the Three Kingdoms Era, 1st-7th centuries A.D.)

name: Seoul; note - Sejong, located some 120 km (75 mi) south of Seoul, is being developed as a new capital
geographic coordinates: 37 33 N, 126 59 E
time difference: UTC+9 (14 hours ahead of Washington, DC, during Standard Time)
etymology: the name originates from the Korean word meaning "capital city" and which is believed to be derived from Seorabeol, the name of the capital of the ancient Korean Kingdom of Silla

history: several previous; latest passed by National Assembly 12 October 1987, approved in referendum 28 October 1987, effective 25 February 1988
amendments: proposed by the president or by majority support of the National Assembly membership; passage requires at least two-thirds majority vote by the Assembly membership, approval in a referendum by more than one half of the votes by more than one half of eligible voters, and promulgation by the president; amended several times, last in 1987; note - an amendment proposed in March 2018 that would change the presidential term to 4 years and increase the term limit to 2 failed in the National Assembly vote in June 2018 (2018)

citizenship by birth: no
citizenship by descent only: at least one parent must be a citizen of South Korea
dual citizenship recognized: no
residency requirement for naturalization: 5 years

chief of state: President MOON Jae-in (since 10 May 2017); note - President PARK Geun-hye (since 25 February 2013) was impeached by the National Assembly on 9 December 2016; PARK's impeachment was upheld by the Constitutional Court and she was removed from office on 9 March 2017
head of government: Prime Minister LEE Nak-yon (since 1 June 2017); Deputy Prime Ministers KIM Dong-yeon (since 9 June 2017), KIM Sang-kon (since 4 July 2017)
cabinet: State Council appointed by the president on the prime minister's recommendation
elections/appointments: president directly elected by simple majority popular vote for a single 5-year term; election last held on 9 May 2017 (next to be held in 2022); prime minister appointed by president with consent of National Assembly
election results: MOON Jae-in elected president; percent of vote - MOON Jae-in (DP) 41.1%, HONG Joon-pyo (LKP) 25.5%, AHN Cheol-soo (PP) 21.4%, other 12%

highest courts: Supreme Court of South Korea (consists of a chief justice and 13 justices); Constitutional Court (consists of a court head and 8 justices)
judge selection and term of office: Supreme Court chief justice appointed by the president with the consent of the National Assembly; other justices appointed by the president upon the recommendation of the chief justice and consent of the National Assembly; position of the chief justice is a 6-year nonrenewable term; other justices serve 6-year renewable terms; Constitutional Court justices appointed - 3 by the president, 3 by the National Assembly, and 3 by the Supreme Court chief justice; court head serves until retirement at age 70, while other justices serve 6-year renewable terms with mandatory retirement at age 65
subordinate courts: High Courts; District Courts; Branch Courts (organized under the District Courts); specialized courts for family and administrative issues

white with a red (top) and blue yin-yang symbol in the center; there is a different black trigram from the ancient I Ching (Book of Changes) in each corner of the white field; the South Korean national flag is called Taegukki; white is a traditional Korean color and represents peace and purity; the blue section represents the negative cosmic forces of the yin, while the red symbolizes the opposite positive forces of the yang; each trigram (kwae) denotes one of the four universal elements, which together express the principle of movement and harmony

name: "Aegukga" (Patriotic Song)
lyrics/music: YUN Ch'i-Ho or AN Ch'ang-Ho/AHN Eaktay
note: adopted 1948, well-known by 1910; both North Korea's and South Korea's anthems share the same name and have a vaguely similar melody but have different lyrics

After emerging from the 1950-53 war with North Korea, South Korea emerged as one of the 20th century’s most remarkable economic success stories, becoming a developed, globally connected, high-technology society within decades. In the 1960s, GDP per capita was comparable with levels in the poorest countries in the world. In 2004, South Korea's GDP surpassed one trillion dollars.Beginning in the 1960s under President PARK Chung-hee, the government promoted the import of raw materials and technology, encouraged saving and investment over consumption, kept wages low, and directed resources to export-oriented industries that remain important to the economy to this day. Growth surged under these policies, and frequently reached double-digits in the 1960s and 1970s. Growth gradually moderated in the 1990s as the economy matured, but remained strong enough to propel South Korea into the ranks of the advanced economies of the OECD by 1997. These policies also led to the emergence of family-owned chaebol conglomerates such as Daewoo, Hyundai, and Samsung, which retained their dominant positions even as the government loosened its grip on the economy amid the political changes of the 1980s and 1990s.The Asian financial crisis of 1997-98 hit South Korea’s companies hard because of their excessive reliance on short-term borrowing, and GDP ultimately plunged by 7% in 1998. South Korea tackled difficult economic reforms following the crisis, including restructuring some chaebols, increasing labor market flexibility, and opening up to more foreign investment and imports. These steps lead to a relatively rapid economic recovery. South Korea also began expanding its network of free trade agreements to help bolster exports, and has since implemented 16 free trade agreements covering 58 countries—including the United State and China—that collectively cover more than three-quarters of global GDP.In 2017, the election of President MOON Jae-in brought a surge in consumer confidence, in part, because of his successful efforts to increase wages and government spending. These factors combined with an uptick in export growth to drive real GDP growth to more than 3%, despite disruptions in South Korea’s trade with China over the deployment of a US missile defense system in South Korea.In 2018 and beyond, South Korea will contend with gradually slowing economic growth - in the 2-3% range - not uncommon for advanced economies. This could be partially offset by efforts to address challenges arising from its rapidly aging population, inflexible labor market, continued dominance of the chaebols, and heavy reliance on exports rather than domestic consumption. Socioeconomic problems also persist, and include rising inequality, poverty among the elderly, high youth unemployment, long working hours, low worker productivity, and corruption.