Kuwait has been ruled by the AL-SABAH dynasty since the 18th century. The threat of Ottoman invasion in 1899 prompted Amir Mubarak AL-SABAH to seek protection from Britain, ceding foreign and defense responsibility to Britain until 1961, when the country attained its independence. Kuwait was attacked and overrun by Iraq in August 1990. Following several weeks of aerial bombardment, a US-led UN coalition began a ground assault in February 1991 that liberated Kuwait in four days. In 1992, the Amir reconstituted the parliament that he had dissolved in 1986. Amid the 2010-11 uprisings and protests across the Arab world, stateless Arabs, known as Bidoon, staged small protests in early 2011 demanding citizenship, jobs, and other benefits available to Kuwaiti nationals. Other demographic groups, notably Islamists and Kuwaitis from tribal backgrounds, soon joined the growing protest movements, which culminated in late 2011 with the resignation of the prime minister amidst allegations of corruption. Demonstrations renewed in late 2012 in response to an amiri decree amending the electoral law that lessened the voting power of the tribal blocs.

An opposition coalition of Sunni Islamists, tribal populists, and some liberals, largely boycotted legislative elections in 2012 and 2013, which ushered in a legislature more amenable to the government's agenda. Faced with the prospect of painful subsidy cuts, oppositionists and independents actively participated in the November 2016 election, winning nearly half of the seats but a cohesive opposition alliance largely ceased to exist with the 2016 election and the opposition became increasingly factionalized. Since coming to power in 2006, the Amir has dissolved the National Assembly on seven occasions (the Constitutional Court annulled the Assembly elections in June 2012 and again in June 2013) and shuffled the cabinet over a dozen times, usually citing political stagnation and gridlock between the legislature and the government.

sudden cloudbursts are common from October to April and bring heavy rain, which can damage roads and houses; sandstorms and dust storms occur throughout the year but are most common between March and August

limited natural freshwater resources; some of world's largest and most sophisticated desalination facilities provide much of the water; air and water pollution; desertification; loss of biodiversity 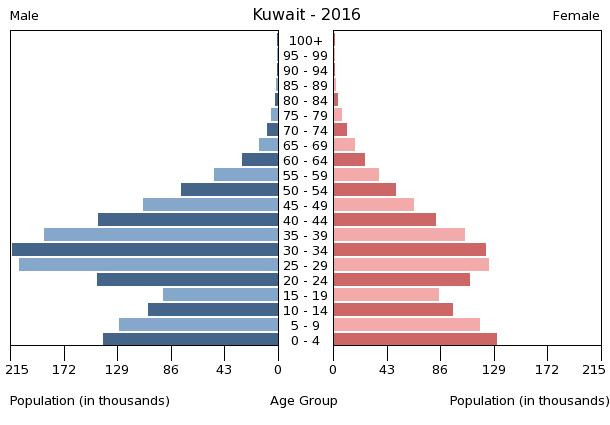 name: Kuwait City
geographic coordinates: 29 22 N, 47 58 E
time difference: UTC+3 (8 hours ahead of Washington, DC, during Standard Time)
etymology: the name derives from Arabic "al-Kuwayt" a diminutive of "kut" meaning "fortress," possibly a reference to a small castle built on the current location of Kuwait City by the Beni Khaled tribe in the 17th century

history: approved and promulgated 11 November 1962
amendments: proposed by the amir or supported by at least one third of the National Assembly; passage requires two-thirds consent of the Assembly membership and promulgation by the amir; constitutional articles on the initiation, approval, and promulgation of general legislation cannot be amended (2016)

citizenship by birth: no
citizenship by descent only: at least one parent must be a citizen of Kuwait
dual citizenship recognized: no
residency requirement for naturalization: not specified

21 years of age and at least 20-year citizenship

highest courts: Constitutional Court (consists of 5 judges); Supreme Court or Court of Cassation (organized into several circuits, each with 5 judges)
judge selection and term of office: all Kuwaiti judges appointed by the Amir upon recommendation of the Supreme Judicial Council, a consultative body comprised of Kuwaiti judges and Ministry of Justice officials
subordinate courts: High Court of Appeal; Court of First Instance; Summary Court

three equal horizontal bands of green (top), white, and red with a black trapezoid based on the hoist side; colors and design are based on the Arab Revolt flag of World War I; green represents fertile fields, white stands for purity, red denotes blood on Kuwaiti swords, black signifies the defeat of the enemy

Kuwait has a geographically small, but wealthy, relatively open economy with crude oil reserves of about 102 billion barrels - more than 6% of world reserves. Kuwaiti officials plan to increase production to 4 million barrels of oil equivalent per day by 2020. Petroleum accounts for over half of GDP, 92% of export revenues, and 90% of government income.With world oil prices declining, Kuwait realized a budget deficit in 2015 for the first time more than a decade; in 2016, the deficit grew to 16.5% of GDP. Kuwaiti authorities announced cuts to fuel subsidies in August 2016, provoking outrage among the public and National Assembly, and the Amir dissolved the government for the seventh time in ten years. In 2017 the deficit was reduced to 7.2% of GDP, and the government raised $8 billion by issuing international bonds. Despite Kuwait’s dependence on oil, the government has cushioned itself against the impact of lower oil prices, by saving annually at least 10% of government revenue in the Fund for Future Generations.Kuwait has failed to diversify its economy or bolster the private sector, because of a poor business climate, a large public sector that employs about 74% of citizens, and an acrimonious relationship between the National Assembly and the executive branch that has stymied most economic reforms. The Kuwaiti Government has made little progress on its long-term economic development plan first passed in 2010. While the government planned to spend up to $104 billion over four years to diversify the economy, attract more investment, and boost private sector participation in the economy, many of the projects did not materialize because of an uncertain political situation or delays in awarding contracts. To increase non-oil revenues, the Kuwaiti Government in August 2017 approved draft bills supporting a Gulf Cooperation Council-wide value added tax scheduled to take effect in 2018.

17-21 years of age for voluntary military service; Kuwait reintroduced one-year mandatory service for men aged 18-35 in May 2017 after having suspended conscription in 2001; service is divided in two phases – four months for training and eight months for military service. (2018)

stateless persons: 92,000 (2018); note - Kuwait's 1959 Nationality Law defined citizens as persons who settled in the country before 1920 and who had maintained normal residence since then; one-third of the population, descendants of Bedouin tribes, missed the window of opportunity to register for nationality rights after Kuwait became independent in 1961 and were classified as bidun (meaning "without"); since the 1980s Kuwait's bidun have progressively lost their rights, including opportunities for employment and education, amid official claims that they are nationals of other countries who have destroyed their identification documents in hopes of gaining Kuwaiti citizenship; Kuwaiti authorities have delayed processing citizenship applications and labeled biduns as "illegal residents," denying them access to civil documentation, such as birth and marriage certificates

current situation: Kuwait is a destination country for men and women subjected to forced labor and, to a lesser degree, forced prostitution; men and women migrate from South and Southeast Asia, Egypt, the Middle East, and increasingly Africa to work in Kuwait, most of them in the domestic service, construction, and sanitation sectors; although most of these migrants enter Kuwait voluntarily, upon arrival some are subjected to conditions of forced labor by their sponsors and labor agents, including debt bondage; Kuwait’s sponsorship law restricts workers’ movements and penalizes them for running away from abusive workplaces, making domestic workers particularly vulnerable to forced labor in private homes
tier rating: Tier 3 - Kuwait does not fully comply with the minimum standards for the elimination of trafficking and is not making sufficient efforts to do so; although investigations into visa fraud rings lead to the referral of hundreds of people for prosecution, including complicit officials, the government has not prosecuted or convicted any suspected traffickers; authorities made no effort to enforce the prohibition against withholding workers’ passports, as mandated under Kuwaiti law; punishment of forced labor cases was limited to shutting down labor recruitment firms, assessing fines, and ordering the return of withheld passports and the paying of back-wages; the government made progress in victims’ protection by opening a high-capacity shelter for runaway domestic workers but still lacks formal procedures to identify and refer victims to care services (2015)