English and Irish colonists from St. Kitts first settled on Montserrat in 1632; the first African slaves arrived three decades later. The British and French fought for possession of the island for most of the 18th century, but it finally was confirmed as a British possession in 1783. The island's sugar plantation economy was converted to small farm landholdings in the mid-19th century. Much of this island was devastated and two-thirds of the population fled abroad because of the eruption of the Soufriere Hills Volcano that began on 18 July 1995. Montserrat has endured volcanic activity since, with the last eruption occurring in 2013.

Caribbean, island in the Caribbean Sea, southeast of Puerto Rico

about 0.6 times the size of Washington, DC

volcanic eruptions; severe hurricanes (June to November) volcanism: Soufriere Hills volcano (915 m), has erupted continuously since 1995; a massive eruption in 1997 destroyed most of the capital, Plymouth, and resulted in approximately half of the island becoming uninhabitable; the island of Montserrat is part of the volcanic island arc of the Lesser Antilles that extends from Saba in the north to Grenada in the south

land erosion occurs on slopes that have been cleared for cultivation

5,315 (July 2018 est.)
note: an estimated 8,000 refugees left the island following the resumption of volcanic activity in July 1995; some have returned
country comparison to the world: 228 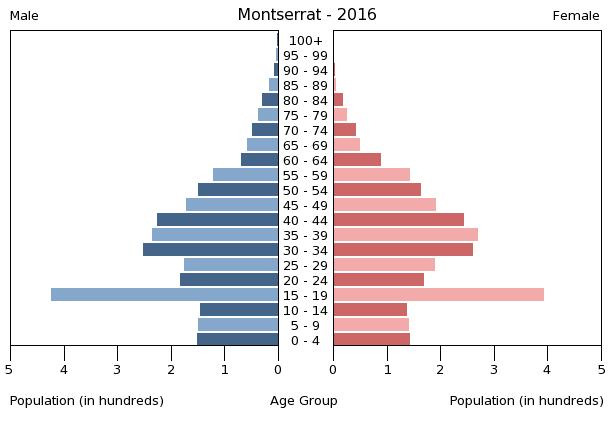 name: Plymouth; note - Plymouth was abandoned in 1997 because of volcanic activity; interim government buildings have been built at Brades Estate, the de facto capital, in the Carr's Bay/Little Bay vicinity at the northwest end of Montserrat
geographic coordinates: 16 42 N, 62 13 W
time difference: UTC-4 (1 hour ahead of Washington, DC, during Standard Time)
etymology and note: now entirely deserted because of volcanic activity, the city was originally named after Plymouth, England; de jure, Plymouth remains the capital city of Montserrat; it is therefore the only ghost town that serves as the capital of a political entity

Birthday of Queen ELIZABETH II, usually celebrated the Monday after the second Saturday in June (1926)

chief of state: Queen ELIZABETH II (since 6 February 1952); represented by Governor Andrew PEARCE (since 1 February 2018)
head of government: Premier Donaldson ROMERO (since 12 September 2014); note - effective with The Constitution Order 2010, effective October 2010, the office of premier replaced the office of chief minister
cabinet: Executive Council consists of the governor, the premier, 3 other ministers, the attorney general, and the finance secretary
elections/appointments: the monarchy is hereditary; governor appointed by the monarch; following legislative elections, the leader of the majority party usually becomes premier

highest courts: the Eastern Caribbean Supreme Court (ECSC) is the superior court of the Organization of Eastern Caribbean States; the ECSC - headquartered on St. Lucia - consists of the Court of Appeal - headed by the chief justice and 4 judges - and the High Court with 18 judges; the Court of Appeal is itinerant, traveling to member states on a schedule to hear appeals from the High Court and subordinate courts; High Court judges reside in the member states, with 1 assigned to Montserrat; Montserrat is also a member of the Caribbean Court of Justice
judge selection and term of office: chief justice of Eastern Caribbean Supreme Court appointed by the Her Majesty, Queen ELIZABETH II; other justices and judges appointed by the Judicial and Legal Services Commission, and independent body of judicial officials; Court of Appeal justices appointed for life with mandatory retirement at age 65; High Court judges appointed for life with mandatory retirement at age 62
subordinate courts: magistrate's court

blue with the flag of the UK in the upper hoist-side quadrant and the Montserratian coat of arms centered in the outer half of the flag; the arms feature a woman in green dress, Erin, the female personification of Ireland, standing beside a yellow harp and embracing a large dark cross with her right arm; Erin and the harp are symbols of Ireland reflecting the territory's Irish ancestry; blue represents awareness, trustworthiness, determination, and righteousness

Severe volcanic activity, which began in July 1995, has put a damper on this small, open economy. A catastrophic eruption in June 1997 closed the airport and seaports, causing further economic and social dislocation. Two-thirds of the 12,000 inhabitants fled the island. Some began to return in 1998 but lack of housing limited the number. The agriculture sector continued to be affected by the lack of suitable land for farming and the destruction of crops.Prospects for the economy depend largely on developments in relation to the volcanic activity and on public sector construction activity. Half of the island remains uninhabitable. In January 2013, the EU announced the disbursement of a $55.2 million aid package to Montserrat in order to boost the country's economic recovery, with a specific focus on public finance management, public sector reform, and prudent economic management. Montserrat is tied to the EU through the UK. Although the UK is leaving the EU, Montserrat’s aid will not be affected as Montserrat maintains a direct agreement with the EU regarding aid.

note: volcanic eruptions that began in 1995 destroyed most of the 227 km road system; a new road infrastructure has been built on the north end of the island