The Genoese built a fortress on the site of present day Monaco in 1215. The current ruling GRIMALDI family first seized control in 1297 but was not able to permanently secure its holding until 1419. Economic development was spurred in the late 19th century with a railroad linkup to France and the opening of a casino. Since then, the principality's mild climate, splendid scenery, and gambling facilities have made Monaco world famous as a tourist and recreation center.

Western Europe, bordering the Mediterranean Sea on the southern coast of France, near the border with Italy

about three times the size of the National Mall in Washington, DC

the second most densely populated country in the world (after Macau); its entire population living on 2 square km

second-smallest independent state in the world (after the Holy See); smallest country with a coastline; almost entirely urban 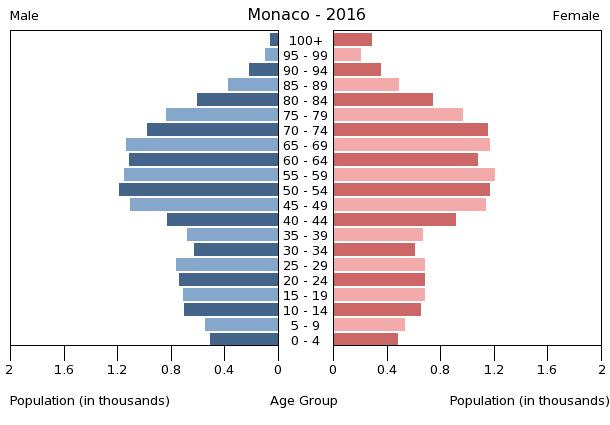 the second most densely populated country in the world (after Macau); its entire population living on 2 square km

none; there are no first-order administrative divisions as defined by the US Government, but there are 4 quarters (quartiers, singular - quartier); Fontvieille, La Condamine, Monaco-Ville, Monte-Carlo; note - Moneghetti, a part of La Condamine, is sometimes called the 5th quarter of Monaco

1419 (beginning of permanent rule by the House of GRIMALDI)

chief of state: Prince ALBERT II (since 6 April 2005)
head of government: Minister of State Serge TELLE (since 1 February 2016)
cabinet: Council of Government under the authority of the monarch
elections/appointments: the monarchy is hereditary; minister of state appointed by the monarch from a list of three French national candidates presented by the French Government

two equal horizontal bands of red (top) and white; the colors are those of the ruling House of Grimaldi and have been in use since 1339, making the flag one of the world's oldest national banners
note: similar to the flag of Indonesia which is longer and the flag of Poland which is white (top) and red

name: "A Marcia de Muneghu" (The March of Monaco)
lyrics/music: Louis NOTARI/Charles ALBRECHT
note: music adopted 1867, lyrics adopted 1931; although French is commonly spoken, only the Monegasque lyrics are official; the French version is known as "Hymne Monegasque" (Monegasque Anthem); the words are generally only sung on official occasions

Monaco, bordering France on the Mediterranean coast, is a popular resort, attracting tourists to its casino and pleasant climate. The principality also is a banking center and has successfully sought to diversify into services and small, high-value-added, nonpolluting industries. The state retains monopolies in a number of sectors, including tobacco, the telephone network, and the postal service. Living standards are high, roughly comparable to those in prosperous French metropolitan areas.The state has no income tax and low business taxes and thrives as a tax haven both for individuals who have established residence and for foreign companies that have set up businesses and offices. Monaco, however, is not a tax-free shelter; it charges nearly 20% value-added tax, collects stamp duties, and companies face a 33% tax on profits unless they can show that three-quarters of profits are generated within the principality. Monaco was formally removed from the OECD's "grey list" of uncooperative tax jurisdictions in late 2009, but continues to face international pressure to abandon its banking secrecy laws and help combat tax evasion. In October 2014, Monaco officially became the 84th jurisdiction participating in the OECD’s Multilateral Convention on Mutual Administrative Assistance in Tax Matters, an effort to combat offshore tax avoidance and evasion.Monaco's reliance on tourism and banking for its economic growth has left it vulnerable to downturns in France and other European economies which are the principality's main trade partners. In 2009, Monaco's GDP fell by 11.5% as the euro-zone crisis precipitated a sharp drop in tourism and retail activity and home sales. A modest recovery ensued in 2010 and intensified in 2013, with GDP growth of more than 9%, but Monaco's economic prospects remain uncertain.

note: Monaco has a single railway station but does not operate its own train service;  the French operator SNCF operates rail services in Monaco