Although known to Arab and Malay sailors as early as the 10th century, Mauritius was first explored by the Portuguese in the 16th century and subsequently settled by the Dutch - who named it in honor of Prince Maurits van NASSAU - in the 17th century. The French assumed control in 1715, developing the island into an important naval base overseeing Indian Ocean trade, and establishing a plantation economy of sugar cane. The British captured the island in 1810, during the Napoleonic Wars. Mauritius remained a strategically important British naval base, and later an air station, playing an important role during World War II for anti-submarine and convoy operations, as well as the collection of signals intelligence. Independence from the UK was attained in 1968. A stable democracy with regular free elections and a positive human rights record, the country has attracted considerable foreign investment and has one of Africa's highest per capita incomes.

Southern Africa, island in the Indian Ocean, about 800 km (500 mi) east of Madagascar

the main island, from which the country derives its name, is of volcanic origin and is almost entirely surrounded by coral reefs; former home of the dodo, a large flightless bird related to pigeons, driven to extinction by the end of the 17th century through a combination of hunting and the introduction of predatory species

Indo-Mauritian (compose approximately two thirds of the total population), Creole, Sino-Mauritian, Franco-Mauritian
note: Mauritius has not had a question on ethnicity on its national census since 1972

Mauritius has transitioned from a country of high fertility and high mortality rates in the 1950s and mid-1960s to one with among the lowest population growth rates in the developing world today. After World War II, Mauritius’ population began to expand quickly due to increased fertility and a dramatic drop in mortality rates as a result of improved health care and the eradication of malaria. This period of heightened population growth – reaching about 3% a year – was followed by one of the world’s most rapid birth rate declines.The total fertility rate fell from 6.2 children per women in 1963 to 3.2 in 1972 – largely the result of improved educational attainment, especially among young women, accompanied by later marriage and the adoption of family planning methods. The family planning programs’ success was due to support from the government and eventually the traditionally pronatalist religious communities, which both recognized that controlling population growth was necessary because of Mauritius’ small size and limited resources. Mauritius’ fertility rate has consistently been below replacement level since the late 1990s, a rate that is substantially lower than nearby countries in southern Africa.With no indigenous population, Mauritius’ ethnic mix is a product of more than two centuries of European colonialism and continued international labor migration. Sugar production relied on slave labor mainly from Madagascar, Mozambique, and East Africa from the early 18th century until its abolition in 1835, when slaves were replaced with indentured Indians. Most of the influx of indentured labor – peaking between the late 1830s and early 1860 – settled permanently creating massive population growth of more than 7% a year and reshaping the island’s social and cultural composition. While Indians represented about 12% of Mauritius’ population in 1837, they and their descendants accounted for roughly two-thirds by the end of the 19th century. Most were Hindus, but the majority of the free Indian traders were Muslims.Mauritius again turned to overseas labor when its success in clothing and textile exports led to a labor shortage in the mid-1980s. Clothing manufacturers brought in contract workers (increasingly women) from China, India, and, to a lesser extent Bangladesh and Madagascar, who worked longer hours for lower wages under poor conditions and were viewed as more productive than locals. Downturns in the sugar and textile industries in the mid-2000s and a lack of highly qualified domestic workers for Mauritius’ growing services sector led to the emigration of low-skilled workers and a reliance on skilled foreign labor. Since 2007, Mauritius has pursued a circular migration program to enable citizens to acquire new skills and savings abroad and then return home to start businesses and to invest in the country’s development. 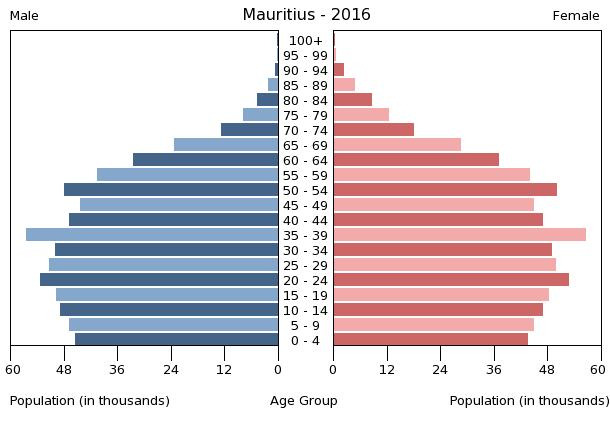 name: Port Louis
geographic coordinates: 20 09 S, 57 29 E
time difference: UTC+4 (9 hours ahead of Washington, DC, during Standard Time)
etymology: named after Louis XV, who was king of France in 1736 when the port became the administrative center of Mauritius and a major reprovisioning stop for French ships traveling between Europe and Asia

history: several previous; latest adopted 12 March 1968
amendments: proposed by the National Assembly; passage of amendments affecting constitutional articles, including the sovereignty of the state, fundamental rights and freedoms, citizenship, or the branches of government, requires approval in a referendum by at least three-fourths majority of voters followed by a unanimous vote by the Assembly; passage of other amendments requires only two-thirds majority vote by the Assembly; amended many times, last in 2016 (2017)

citizenship by birth: yes
citizenship by descent only: yes
dual citizenship recognized: yes
residency requirement for naturalization: 5 out of the previous 7 years including the last 12 months

four equal horizontal bands of red (top), blue, yellow, and green; red represents self-determination and independence, blue the Indian Ocean surrounding the island, yellow has been interpreted as the new light of independence, golden sunshine, or the bright future, and green can symbolize either agriculture or the lush vegetation of the island
note: while many national flags consist of three - and in some cases five - horizontal bands of color, the flag of Mauritius is the world's only national flag to consist of four horizontal color bands

Since independence in 1968, Mauritius has undergone a remarkable economic transformation from a low-income, agriculturally based economy to a diversified, upper middle-income economy with growing industrial, financial, and tourist sectors. Mauritius has achieved steady growth over the last several decades, resulting in more equitable income distribution, increased life expectancy, lowered infant mortality, and a much-improved infrastructure. The economy currently depends on sugar, tourism, textiles and apparel, and financial services, but is expanding into fish processing, information and communications technology, education, and hospitality and property development. Sugarcane is grown on about 90% of the cultivated land area but sugar makes up only around 3-4% of national GDP. Authorities plan to emphasize services and innovation in the coming years. After several years of slow growth, government policies now seek to stimulate economic growth in five areas: serving as a gateway for international investment into Africa; increasing the use of renewable energy; developing smart cities; growing the ocean economy; and upgrading and modernizing infrastructure, including public transportation, the port, and the airport. Mauritius has attracted more than 32,000 offshore entities, many aimed at commerce in India, South Africa, and China. The Mauritius International Financial Center is under scrutiny by international bodies promoting fair tax competition and Mauritius has been cooperating with the European Union and the United states in the automatic exchange of account information. Mauritius is also a member of the OECD/G20’s Inclusive Framework on Base Erosion and Profit Shifting and is under pressure to review its Double Taxation Avoidance Agreements. The offshore sector is vulnerable to changes in the tax framework and authorities have been working on a Financial Services Sector Blueprint to enable Mauritius to transition to a jurisdiction of higher value added. Mauritius’ textile sector has taken advantage of the Africa Growth and Opportunity Act, a preferential trade program that allows duty free access to the US market, with Mauritian exports to the US growing by 35.6 % from 2000 to 2014. However, lack of local labor as well as rising labor costs eroding the competitiveness of textile firms in Mauritius. Mauritius' sound economic policies and prudent banking practices helped mitigate negative effects of the global financial crisis in 2008-09. GDP grew in the 3-4% per year range in 2010-17, and the country continues to expand its trade and investment outreach around the globe. Growth in the US and Europe fostered goods and services exports, including tourism, while lower oil prices kept inflation low. Mauritius continues to rank as one of the most business-friendly environments on the continent and passed a Business Facilitation Act to improve competitiveness and long-term growth prospects. A new National Economic Development Board was set up in 2017-2018 to spearhead efforts to promote exports and attract inward investment.

the government maintains control over TV broadcasting through the Mauritius Broadcasting Corporation (MBC), which only operates digital TV stations since June 2015; MBC is a shareholder in a local company that operates 2 pay-TV stations; the state retains the largest radio broadcast network with multiple stations; several private radio broadcasters have entered the market since 2001; transmissions of at least 2 international broadcasters are available (2019)

current situation: Mauritius is a source, transit, and destination country for men, women, and children subjected to forced labor and sex trafficking; Mauritian girls are induced or sold into prostitution, often by peers, family members, or businessmen offering other forms of employment; Mauritian adults have been identified as labor trafficking victims in the UK, Belgium, and Canada, while Mauritian women from Rodrigues Island are also subject to domestic servitude in Mauritius; Malagasy women transit Mauritius en route to the Middle East for jobs as domestic servants and subsequently are subjected to forced labor; Cambodian men are victims of forced labor on foreign fishing vessels in Mauritius’ territorial waters; other migrant workers from East and South Asia and Madagascar are also subject to forced labor in Mauritius’ manufacturing and construction sectors
tier rating: Tier 2 Watch List – Mauritius does not fully comply with the minimum standards for the elimination of trafficking; however, it is making significant efforts to do so; in 2014, the government made modest efforts to address child sex trafficking but none related to adult forced labor; law enforcement lacks an understanding of trafficking crimes outside of child sex trafficking, despite increasing evidence of other forms of human trafficking; authorities made no trafficking prosecutions or convictions and made modest efforts to assist a couple of child sex trafficking victims; officials sustained an extensive public awareness campaign to prevent child sex trafficking, but no efforts were made to raise awareness or reduce demand for forced adult or child labor (2015)

consumer and transshipment point for heroin from South Asia; small amounts of cannabis produced and consumed locally; significant offshore financial industry creates potential for money laundering, but corruption levels are relatively low and the government appears generally to be committed to regulating its banking industry