A sultanate since the 12th century, the Maldives became a British protectorate in 1887. The islands became a republic in 1968, three years after independence. President Maumoon Abdul GAYOOM dominated Maldives' political scene for 30 years, elected to six successive terms by single-party referendums. Following political demonstrations in the capital Male in August 2003, GAYOOM and his government pledged to embark upon a process of liberalization and democratic reforms, including a more representative political system and expanded political freedoms. Political parties were legalized in 2005.In June 2008, a constituent assembly - termed the "Special Majlis" - finalized a new constitution ratified by GAYOOM in August 2008. The first-ever presidential elections under a multi-candidate, multi-party system were held in October 2008. GAYOOM was defeated in a runoff poll by Mohamed NASHEED, a political activist who had been jailed several years earlier by the GAYOOM regime. In early February 2012, after several weeks of street protests in response to his ordering the arrest of a top judge, NASHEED purportedly resigned the presidency and handed over power to Vice President Mohammed WAHEED Hassan Maniku. A government-appointed Commission of National Inquiry concluded there was no evidence of a coup, but NASHEED contends that police and military personnel forced him to resign. NASHEED, WAHEED, and Abdulla YAMEEN Abdul Gayoom ran in the 2013 elections with YAMEEN ultimately winning the presidency after three rounds of voting. As president, YAMEEN weakened democratic institutions, curtailed civil liberties, jailed his political opponents, restricted the press, and exerted control over the judiciary to strengthen his hold on power and limit dissent. In September 2018, YAMEEN lost his reelection bid to Ibrahim Mohamed SOLIH, a parliamentarian of the Maldivian Democratic Party (MDP), who had the support of a coalition of four parties that came together to defeat YAMEEN and restore democratic norms to Maldives. In April 2019, SOLIH's MDP won 65 of 87 seats in parliament.

Southern Asia, group of atolls in the Indian Ocean, south-southwest of India

about 1.7 times the size of Washington, DC 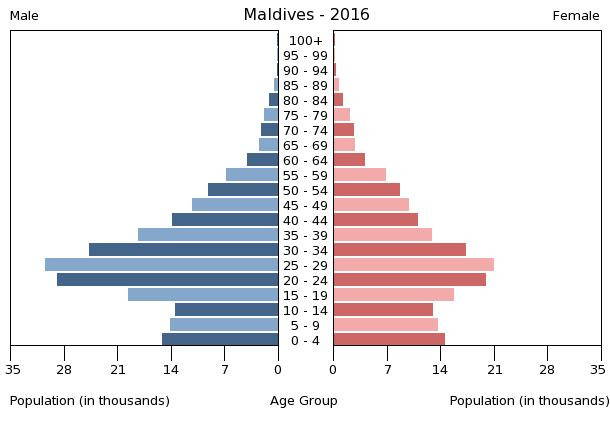 history: many previous; latest ratified 7 August 2008
amendments: proposed by Parliament; passage requires at least three-quarters majority vote by its membership and the signature of the president of the republic; passage of amendments to constitutional articles on rights and freedoms and the terms of office of Parliament and of the president also requires a majority vote in a referendum; amended 2015 (2018)

citizenship by birth: no
citizenship by descent only: at least one parent must be a citizen of Maldives
dual citizenship recognized: yes
residency requirement for naturalization: unknown

highest courts: Supreme Court (consists of the chief justice and 4-6 justices; note - 3 justices as of late 2019)
judge selection and term of office: Supreme Court judges appointed by the president in consultation with the Judicial Service Commission - a 10-member body of selected high government officials and the public - and upon confirmation by voting members of the People's Majlis; judges serve until mandatory retirement at age 70
subordinate courts: High Court; Criminal, Civil, Family, Juvenile, and Drug Courts; Magistrate Courts (on each of the inhabited islands)

the US does not have an embassy in Maldives; US Ambassador to Sri Lanka and Maldives, Alaina TEPLITZ (since 1 November 2018), is accredited to both countries

Maldives has quickly become a middle-income country, driven by the rapid growth of its tourism and fisheries sectors, but the country still contends with a large and growing fiscal deficit. Infrastructure projects, largely funded by China, could add significantly to debt levels. Political turmoil and the declaration of a state of emergency in February 2018 led to the issuance of travel warnings by several countries whose citizens visit Maldives in significant numbers, but the overall impact on tourism revenue was unclear.In 2015, Maldives’ Parliament passed a constitutional amendment legalizing foreign ownership of land; foreign land-buyers must reclaim at least 70% of the desired land from the ocean and invest at least $1 billion in a construction project approved by Parliament.Diversifying the economy beyond tourism and fishing, reforming public finance, increasing employment opportunities, and combating corruption, cronyism, and a growing drug problem are near-term challenges facing the government. Over the longer term, Maldivian authorities worry about the impact of erosion and possible global warming on their low-lying country; 80% of the area is 1 meter or less above sea level.

18-28 years of age for voluntary service; no conscription; 10th grade or equivalent education required; must not be a member of a political party

Maldives National Defense Force (MNDF), with its small size and with little serviceable equipment, is inadequate to prevent external aggression and is primarily tasked to reinforce Maldives Police Service (MPS) and ensure security in the exclusive economic zone (2015)

current situation: Maldives is a destination country for men, women, and children subjected to forced labor and sex trafficking and a source country for women and children subjected to labor and sex trafficking; primarily Bangladeshi and Indian migrants working both legally and illegally in the construction and service sectors face conditions of forced labor, including fraudulent recruitment, confiscation of identity and travel documents, nonpayment and withholding of wages, and debt bondage; a small number of women from Asia, Eastern Europe, and former Soviet states are trafficked to Maldives for sexual exploitation; Maldivian women may be subjected to sex trafficking domestically or in Sri Lanka; some Maldivian children are transported to the capital for domestic service, where they may also be victims of sexual abuse and forced labor
tier rating: Tier 2 Watch List – Maldives does not fully comply with the minimum standards for the elimination of trafficking; however, it is making significant efforts to do so; the government adopted a national action plan for 2015-19 and is continuing to develop victim identification, protection, and referral procedures, but overall its anti-trafficking efforts did not increase; only five trafficking investigations were conducted, no new prosecutions were initiated for the second consecutive year, and no convictions were made, down from one in 2013; some officials warned businesses in advance of planned raids for suspected trafficking offenses; victim protection deteriorated when the state-run shelter for female victims barred access to victims shortly after opening in January 2014, in part because of bureaucratic disputes, which dissuaded victims from pursuing charges against perpetrators; the government did not prosecute or hold accountable any employers or government officials for withholding passports (2015) Maldivesis the Relief Central Word of the day!