Settled by both Britain and France during the first half of the 19th century, the island became a French possession in 1853. It served as a penal colony for four decades after 1864. Agitation for independence during the 1980s and early 1990s ended in the 1998 Noumea Accord, which over two decades transferred an increasing amount of governing responsibility from France to New Caledonia. In a referendum held in November 2018, residents rejected independence and decided to retain their territorial status, although two additional referendums may occur in 2020 and 2022, per the Noumea Accord.

Oceania, islands in the South Pacific Ocean, east of Australia

cyclones, most frequent from November to March volcanism: Matthew and Hunter Islands are historically active

consists of the main island of New Caledonia (one of the largest in the Pacific Ocean), the archipelago of Iles Loyaute, and numerous small, sparsely populated islands and atolls 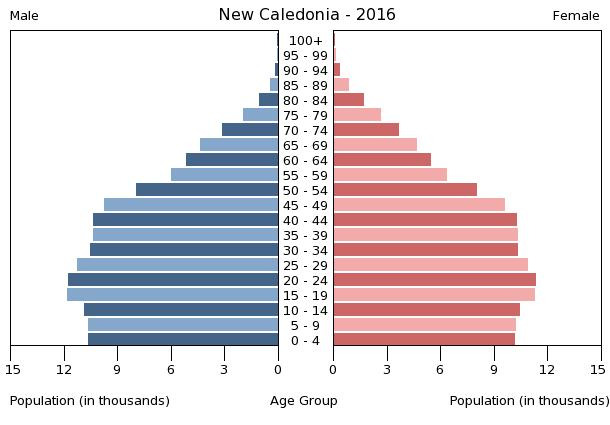 3.9 migrant(s)/1,000 population (2018 est.)
note: there has been steady emigration from Wallis and Futuna to New Caledonia
country comparison to the world: 34

special collectivity (or a sui generis collectivity) of France since 1998; note - an independence referendum took place on 4 November 2018 with a majority voting to reject independence in favor of maintaining the status quo; two additional referenda, still unsceheduled, may occur in 2020 and 2022

none (overseas collectivity of France); note - in an independence referendum on 4 November 2018, the majority voted to reject independence in favor of maintaining the status quo

history: 4 October 1958 (French Constitution with changes as reflected in the Noumea Accord of 5 May 1998)
amendments: French constitution amendment procedures apply

chief of state: President Emmanuel MACRON (since 14 May 2017); represented by High Commissioner Laurent PREVOST (since 5 August 2019)
head of government: President of the Government Thierry SANTA (since 9 July 2019); Temporary Vice President Gilbert TUIENON (since 9 July 2019); note - Temporary Vice President Gilbert TUIENON was elected so that the new government could take over; Philippe GERMAIN' s government remained caretaker government until the new government was settled
cabinet: Cabinet elected from and by the Territorial Congress
elections/appointments: French president directly elected by absolute majority popular vote in 2 rounds if needed for a 5-year term (eligible for a second term); high commissioner appointed by the French president on the advice of the French Ministry of Interior; president of New Caledonia elected by Territorial Congress for a 5-year term (no term limits); election last held on 13 June 2017 (next to be held in 2022)
election results: Thierry SANTA elected president by Territorial Congress with 6 votes out of 11

description: unicameral Territorial Congress or Congrès du Territoire (54 seats; members indirectly selected proportionally by the partisan makeup of the 3 Provincial Assemblies or Assemblés Provinciales; members of the 3 Provincial Assemblies directly elected by proportional representation vote; members serve 5-year terms); note - the Customary Senate is the assembly of the various traditional councils of the Kanaks, the indigenous population, which rules on laws affecting the indigenous population
New Caledonia indirectly elects 2 members to the French Senate by an electoral colleges for a 6-year term with one seat renewed every 3 years and directly elects 2 members to the French National Assembly by absolute majority vote in 2 rounds if needed for a 5-year term
elections:
Territorial Congress - last held on 12 May 2019 (next to be held in May 2024)
French Senate - election last held on 24 September 2017 (next to be held not later than 2019)

New Caledonia has two official flags; alongside the flag of France, the Kanak (indigenous Melanesian) flag has equal status; the latter consists of three equal horizontal bands of blue (top), red, and green; a large yellow disk - diameter two-thirds the height of the flag - shifted slightly to the hoist side is edged in black and displays a black fleche faitiere symbol, a native rooftop adornment

name: "Soyons unis, devenons freres" (Let Us Be United, Let Us Become Brothers)
lyrics/music: Chorale Melodia (a local choir)
note: adopted 2008; contains a mixture of lyrics in both French and Nengone (an indigenous language); as a self-governing territory of France, in addition to the local anthem, "La Marseillaise" is official (see France)

New Caledonia has 11% of the world's nickel reserves, representing the second largest reserves on the planet. Only a small amount of the land is suitable for cultivation, and food accounts for about 20% of imports. In addition to nickel, substantial financial support from France - equal to more than 15% of GDP - and tourism are keys to the health of the economy.With the gradual increase in the production of two new nickel plants in 2015, average production of metallurgical goods stood at a record level of 94 thousand tons. However, the sector is exposed to the high volatility of nickel prices, which have been in decline since 2016. In 2017, one of the three major mining firms on the island, Vale, put its operations up for sale, triggering concerns of layoffs ahead of the 2018 independence referendum.