The Pacific coast of Nicaragua was settled as a Spanish colony from Panama in the early 16th century. Independence from Spain was declared in 1821 and the country became an independent republic in 1838. Britain occupied the Caribbean Coast in the first half of the 19th century, but gradually ceded control of the region in subsequent decades. Violent opposition to governmental manipulation and corruption spread to all classes by 1978 and resulted in a short-lived civil war that brought a civic-military coalition, spearheaded by the Marxist Sandinista guerrillas led by Daniel ORTEGA Saavedra to power in 1979. Nicaraguan aid to leftist rebels in El Salvador prompted the US to sponsor anti-Sandinista contra guerrillas through much of the 1980s. After losing free and fair elections in 1990, 1996, and 2001, former Sandinista President Daniel ORTEGA was elected president in 2006, 2011, and most recently in 2016. Municipal, regional, and national-level elections since 2008 have been marred by widespread irregularities. Democratic institutions have weakened under the ORTEGA administration as the president has garnered full control over all branches of government, especially after cracking down on a nationwide antigovernment protest movement in 2018.

Central America, bordering both the Caribbean Sea and the North Pacific Ocean, between Costa Rica and Honduras

tropical in lowlands, cooler in highlands

destructive earthquakes; volcanoes; landslides; extremely susceptible to hurricanes volcanism: significant volcanic activity; Cerro Negro (728 m), which last erupted in 1999, is one of Nicaragua's most active volcanoes; its lava flows and ash have been known to cause significant damage to farmland and buildings; other historically active volcanoes include Concepcion, Cosiguina, Las Pilas, Masaya, Momotombo, San Cristobal, and Telica

Despite being one of the poorest countries in Latin America, Nicaragua has improved its access to potable water and sanitation and has ameliorated its life expectancy, infant and child mortality, and immunization rates. However, income distribution is very uneven, and the poor, agriculturalists, and indigenous people continue to have less access to healthcare services. Nicaragua's total fertility rate has fallen from around 6 children per woman in 1980 to below replacement level today, but the high birth rate among adolescents perpetuates a cycle of poverty and low educational attainment.Nicaraguans emigrate primarily to Costa Rica and to a lesser extent the United States. Nicaraguan men have been migrating seasonally to Costa Rica to harvest bananas and coffee since the early 20th century. Political turmoil, civil war, and natural disasters from the 1970s through the 1990s dramatically increased the flow of refugees and permanent migrants seeking jobs, higher wages, and better social and healthcare benefits. Since 2000, Nicaraguan emigration to Costa Rica has slowed and stabilized. Today roughly 300,000 Nicaraguans are permanent residents of Costa Rica - about 75% of the foreign population - and thousands more migrate seasonally for work, many illegally. 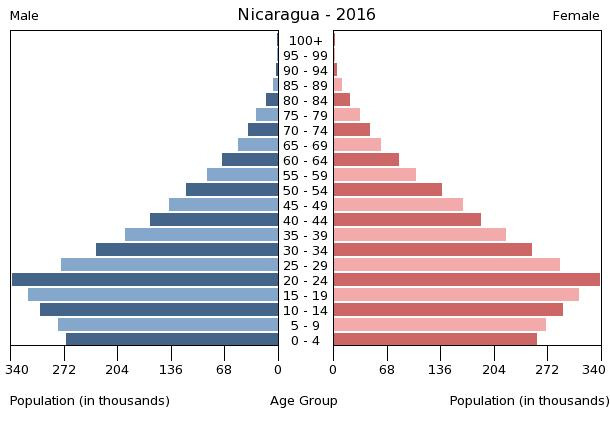 conventional long form: Republic of Nicaragua
conventional short form: Nicaragua
local long form: Republica de Nicaragua
local short form: Nicaragua
etymology: Nicarao was the name of the largest indigenous settlement at the time of Spanish arrival; conquistador Gil GONZALEZ Davila, who explored the area (1622-23), combined the name of the community with the Spanish word "agua" (water), referring to the two large lakes in the west of the country (Lake Managua and Lake Nicaragua)

name: Managua
geographic coordinates: 12 08 N, 86 15 W
time difference: UTC-6 (1 hour behind Washington, DC, during Standard Time)
etymology: may derive from the indigenous Nahuatl term "mana-ahuac," which translates as "adjacent to the water" or a site "surrounded by water"; the city is situated on the southwestern shore of Lake Managua

history: several previous; latest adopted 19 November 1986, effective 9 January 1987
amendments: proposed by the president of the republic or assent of at least half of the National Assembly membership; passage requires approval by 60% of the membership of the next elected Assembly and promulgation by the president of the republic; amended several times, last in 2014 (2018)

citizenship by birth: yes
citizenship by descent only: yes
dual citizenship recognized: no, except in cases where bilateral agreements exist
residency requirement for naturalization: 4 years

three equal horizontal bands of blue (top), white, and blue with the national coat of arms centered in the white band; the coat of arms features a triangle encircled by the words REPUBLICA DE NICARAGUA on the top and AMERICA CENTRAL on the bottom; the banner is based on the former blue-white-blue flag of the Federal Republic of Central America; the blue bands symbolize the Pacific Ocean and the Caribbean Sea, while the white band represents the land between the two bodies of water
note: similar to the flag of El Salvador, which features a round emblem encircled by the words REPUBLICA DE EL SALVADOR EN LA AMERICA CENTRAL centered in the white band; also similar to the flag of Honduras, which has five blue stars arranged in an X pattern centered in the white band

name: "Salve a ti, Nicaragua" (Hail to Thee, Nicaragua)
lyrics/music: Salomon Ibarra MAYORGA/traditional, arranged by Luis Abraham DELGADILLO
note: although only officially adopted in 1971, the music was approved in 1918 and the lyrics in 1939; the tune, originally from Spain, was used as an anthem for Nicaragua from the 1830s until 1876

Nicaragua, the poorest country in Central America and the second poorest in the Western Hemisphere, has widespread underemployment and poverty. GDP growth of 4.5% in 2017 was insufficient to make a significant difference. Textiles and agriculture combined account for nearly 50% of Nicaragua's exports. Beef, coffee, and gold are Nicaragua’s top three export commodities.The Dominican Republic-Central America-United States Free Trade Agreement has been in effect since April 2006 and has expanded export opportunities for many Nicaraguan agricultural and manufactured goods.In 2013, the government granted a 50-year concession with the option for an additional 50 years to a newly formed Chinese-run company to finance and build an inter-oceanic canal and related projects, at an estimated cost of $50 billion. The canal construction has not started.

33.3% of GDP (2017 est.)
31.2% of GDP (2016 est.)
note: official data; data cover general government debt and include debt instruments issued (or owned) by Government entities other than the treasury; the data include treasury debt held by foreign entities, as well as intragovernmental debt; intragovernmental debt consists of treasury borrowings from surpluses in the social funds, such as retirement, medical care, and unemployment, debt instruments for the social funds are not sold at public auctions; Nicaragua rebased its GDP figures in 2012, which reduced the figures for debt as a percentage of GDP
country comparison to the world: 157

general assessment: system being upgraded by foreign investment; nearly all installed telecommunications capacity now uses digital technology, owing to investments since privatization of the formerly state-owned telecommunications company; lowest fixed-line teledensity and mobile penetration in Central America; a Russian state corporation is operating in the area; LTE service in 60 towns and cities (2018)
domestic: since privatization, access to fixed-line and mobile-cellular services has improved; fixed-line teledensity roughly 6 per 100 persons; mobile-cellular telephone subscribership has increased to 136 per 100 persons (2018)
international: country code - 505; landing point for the ARCOS fiber-optic submarine cable which provides connectivity to South and Central America, parts of the Caribbean, and the US; satellite earth stations - 1 Intersputnik (Atlantic Ocean region) and 1 Intelsat (Atlantic Ocean) (2019)

multiple terrestrial TV stations, supplemented by cable TV in most urban areas; nearly all are government-owned or affiliated; more than 300 radio stations, both government-affiliated and privately owned (2019)

2,220 km(navigable waterways as well as the use of the large Lake Managua and Lake Nicaragua; rivers serve only the sparsely populated eastern part of the country) (2011)
country comparison to the world: 39

the 1992 ICJ ruling for El Salvador and Honduras advised a tripartite resolution to establish a maritime boundary in the Gulf of Fonseca, which considers Honduran access to the Pacific; Nicaragua and Costa Rica regularly file border dispute cases over the delimitations of the San Juan River and the northern tip of Calero Island to the ICJ; there is an ongoing case in the ICJ to determine Pacific and Atlantic ocean maritime borders as well as land borders; in 2009, the ICJ ruled that Costa Rican vessels carrying out police activities could not use the river, but official Costa Rican vessels providing essential services to riverside inhabitants and Costa Rican tourists could travel freely on the river; in 2011, the ICJ provisionally ruled that both countries must remove personnel from the disputed area; in 2013, the ICJ rejected Nicaragua's 2012 suit to halt Costa Rica's construction of a highway paralleling the river on the grounds of irreparable environmental damage; in 2013, the ICJ, regarding the disputed territory, ordered that Nicaragua should refrain from dredging or canal construction and refill and repair damage caused by trenches connecting the river to the Caribbean and upheld its 2010 ruling that Nicaragua must remove all personnel; in early 2014, Costa Rica brought Nicaragua to the ICJ over offshore oil concessions in the disputed region; Nicaragua filed a case against Colombia in 2013 over the delimitation of the Continental shelf beyond the 200 nautical miles from the Nicaraguan coast, as well as over the alleged violation by Colombia of Nicaraguan maritime space in the Caribbean Sea