Paraguay achieved its independence from Spain in 1811. In the disastrous War of the Triple Alliance (1865-70) - between Paraguay and Argentina, Brazil, and Uruguay - Paraguay lost two-thirds of its adult males and much of its territory. The country stagnated economically for the next half century. Following the Chaco War of 1932-35 with Bolivia, Paraguay gained a large part of the Chaco lowland region. The 35-year military dictatorship of Alfredo STROESSNER ended in 1989, and Paraguay has held relatively free and regular presidential elections since the country's return to democracy.

about three times the size of New York state; slightly smaller than California

subtropical to temperate; substantial rainfall in the eastern portions, becoming semiarid in the far west

landlocked; lies between Argentina, Bolivia, and Brazil; population concentrated in eastern and southern part of country

mestizo (mixed Spanish and Amerindian) 95%, other 5%

Paraguay falls below the Latin American average in several socioeconomic categories, including immunization rates, potable water, sanitation, and secondary school enrollment, and has greater rates of income inequality and child and maternal mortality. Paraguay's poverty rate has declined in recent years but remains high, especially in rural areas, with more than a third of the population below the poverty line. However, the well-being of the poor in many regions has improved in terms of housing quality and access to clean water, telephone service, and electricity. The fertility rate continues to drop, declining sharply from an average 4.3 births per woman in the late 1990s to about 2 in 2013, as a result of the greater educational attainment of women, increased use of contraception, and a desire for smaller families among young women.Paraguay is a country of emigration; it has not attracted large numbers of immigrants because of political instability, civil wars, years of dictatorship, and the greater appeal of neighboring countries. Paraguay first tried to encourage immigration in 1870 in order to rebound from the heavy death toll it suffered during the War of the Triple Alliance, but it received few European and Middle Eastern immigrants. In the 20th century, limited numbers of immigrants arrived from Lebanon, Japan, South Korea, and China, as well as Mennonites from Canada, Russia, and Mexico. Large flows of Brazilian immigrants have been arriving since the 1960s, mainly to work in agriculture. Paraguayans continue to emigrate to Argentina, Brazil, Uruguay, the United States, Italy, Spain, and France. 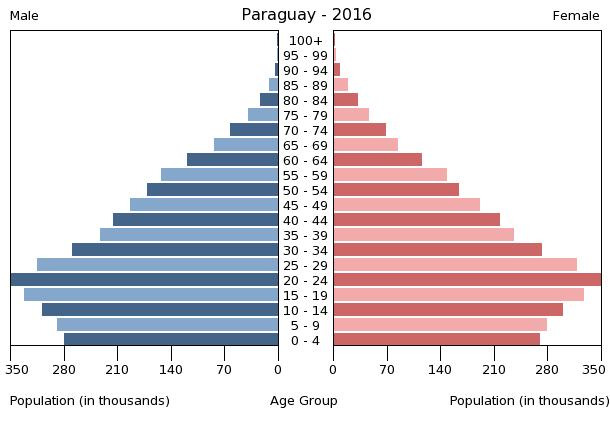 degree of risk: intermediate (2016)
food or waterborne diseases: bacterial diarrhea, hepatitis A, and typhoid fever (2016)
vectorborne diseases: dengue fever (2016)
note: active local transmission of Zika virus by Aedes species mosquitoes has been identified in this country (as of August 2016); it poses an important risk (a large number of cases possible) among US citizens if bitten by an infective mosquito; other less common ways to get Zika are through sex, via blood transfusion, or during pregnancy, in which the pregnant woman passes Zika virus to her fetus

conventional long form: Republic of Paraguay
conventional short form: Paraguay
local long form: Republica del Paraguay
local short form: Paraguay
etymology: the precise meaning of the name Paraguay is unclear, but it seems to derive from the river of the same name; one explanation has the name meaning "water of the Payagua" (an indigenous tribe that lived along the river)

history: several previous; latest approved and promulgated 20 June 1992
amendments: proposed at the initiative of at least one quarter of either chamber of the National Congress, by the president of the republic, or by petition of at least 30,000 voters; passage requires absolute majority vote by both chambers and approval in a referendum; amended 2011, 2014; note - in April 2017, a proposed amendment to extend presidential term limits was defeated by the lower house of the National Congress (2018)

citizenship by birth: yes
citizenship by descent only: at least one parent must be a native-born citizen of Paraguay
dual citizenship recognized: yes
residency requirement for naturalization: 3 years

18 years of age; universal and compulsory until the age of 75

highest courts: Supreme Court of Justice or Corte Suprema de Justicia (consists of 9 justices divided 3 each into the Constitutional Court, Civil and Commercial Chamber, and Criminal Division)
judge selection and term of office: justices proposed by the Council of Magistrates or Consejo de la Magistratura, a 6-member independent body, and appointed by the Chamber of Senators with presidential concurrence; judges can serve until mandatory retirement at age 75
subordinate courts: appellate courts; first instance courts; minor courts, including justices of the peace

three equal, horizontal bands of red (top), white, and blue with an emblem centered in the white band; unusual flag in that the emblem is different on each side; the obverse (hoist side at the left) bears the national coat of arms (a yellow five-pointed star within a green wreath capped by the words REPUBLICA DEL PARAGUAY, all within two circles); the reverse (hoist side at the right) bears a circular seal of the treasury (a yellow lion below a red Cap of Liberty and the words PAZ Y JUSTICIA (Peace and Justice)); red symbolizes bravery and patriotism, white represents integrity and peace, and blue denotes liberty and generosity
note: the three color bands resemble those on the flag of the Netherlands; one of only three national flags that differ on their obverse and reverse sides - the others are Moldova and Saudi Arabia

Landlocked Paraguay has a market economy distinguished by a large informal sector, featuring re-export of imported consumer goods to neighboring countries, as well as the activities of thousands of microenterprises and urban street vendors. A large percentage of the population, especially in rural areas, derives its living from agricultural activity, often on a subsistence basis. Because of the importance of the informal sector, accurate economic measures are difficult to obtain.On a per capita basis, real income has grown steadily over the past five years as strong world demand for commodities, combined with high prices and favorable weather, supported Paraguay's commodity-based export expansion. Paraguay is the fifth largest soy producer in the world. Drought hit in 2008, reducing agricultural exports and slowing the economy even before the onset of the global recession. The economy fell 3.8% in 2009, as lower world demand and commodity prices caused exports to contract. Severe drought and outbreaks of hoof-and-mouth disease in 2012 led to a brief drop in beef and other agricultural exports. Since 2014, however, Paraguay’s economy has grown at a 4% average annual rate due to strong production and high global prices, at a time when other countries in the region have contracted.The Paraguayan Government recognizes the need to diversify its economy and has taken steps in recent years to do so. In addition to looking for new commodity markets in the Middle East and Europe, Paraguayan officials have promoted the country’s low labor costs, cheap energy from its massive Itaipu Hydroelectric Dam, and single-digit tax rate on foreign firms. As a result, the number of factories operating in the country – mostly transplants from Brazil - has tripled since 2014.Corruption, limited progress on structural reform, and deficient infrastructure are the main obstacles to long-term growth. Judicial corruption is endemic and is seen as the greatest barrier to attracting more foreign investment. Paraguay has been adverse to public debt throughout its history, but has recently sought to finance infrastructure improvements to attract foreign investment.

general assessment: the fixed-line market is a state monopoly and fixed-line telephone service is meager; principal switching center is in Asuncion; DSL, cable modem, FttP (fiber to the home) and WiMAX technologies available; competition in mobile market among 4 operators; 18 mobile phones for every fixed-line service phone (2018)
domestic: deficiencies in provision of fixed-line service have resulted in a rapid expansion of mobile-cellular services fostered by competition among multiple providers; Internet market also open to competition; fixed-line 4 per 100 and mobile-cellular 108 per 100 (2018)
international: country code - 595; Paraguay's landlocked position means they must depend on neighbors for interconnection with submarine cable networks, making it cost more for broadband services; satellite earth station - 1 Intelsat (Atlantic Ocean) (2019)

18 years of age for compulsory and voluntary military service; conscript service obligation is 12 months for Army, 24 months for Navy; volunteers for the Air Force must be younger than 22 years of age with a secondary school diploma (2016)

major illicit producer of cannabis, most or all of which is consumed in Brazil, Argentina, and Chile; transshipment country for Andean cocaine headed for Brazil, other Southern Cone markets, and Europe; weak border controls, extensive corruption and money-laundering activity, especially in the Tri-Border Area; weak anti-money-laundering laws and enforcement 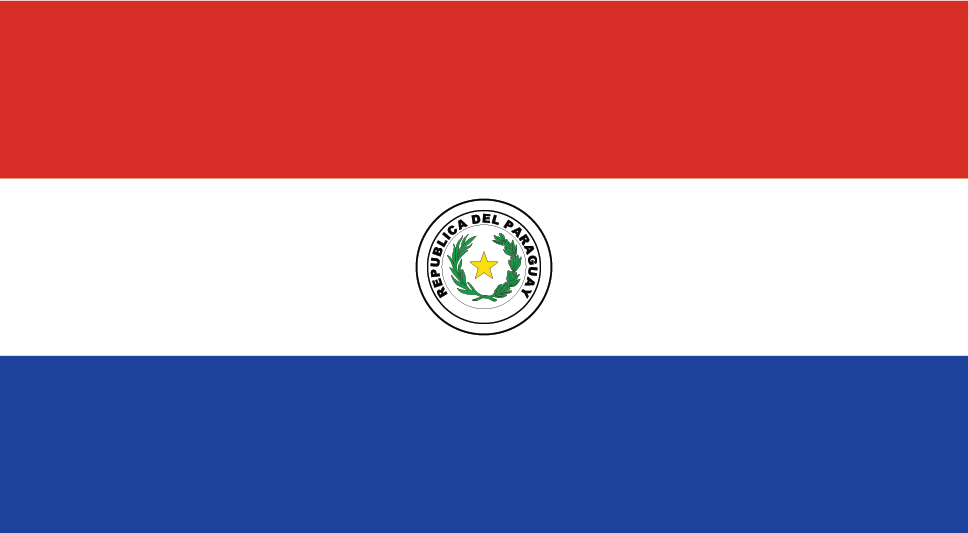