Following its heyday as a global maritime power during the 15th and 16th centuries, Portugal lost much of its wealth and status with the destruction of Lisbon in a 1755 earthquake, occupation during the Napoleonic Wars, and the independence of Brazil, its wealthiest colony, in 1822. A 1910 revolution deposed the monarchy, and for most of the next six decades, repressive governments ran the country. In 1974, a left-wing military coup installed broad democratic reforms. The following year, Portugal granted independence to all of its African colonies. Portugal is a founding member of NATO and entered the EC (now the EU) in 1986.

maritime temperate; cool and rainy in north, warmer and drier in south

the west-flowing Tagus River divides the country: the north is mountainous toward the interior, while the south is characterized by rolling plains

white homogeneous Mediterranean population; citizens of black African descent who immigrated to mainland during decolonization number less than 100,000; since 1990, Eastern Europeans have migrated to Portugal 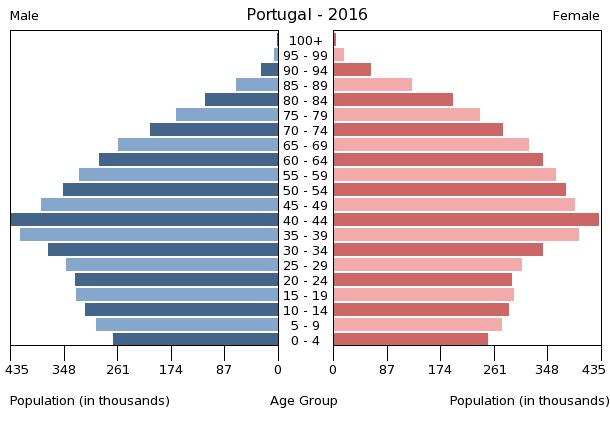 etymology: Lisbon is one of Europe's oldest cities (the second oldest capital city after Athens) and the origin of the name is lost in time; it may have been founded as an ancient Celtic settlement that subsequently maintained close commercial relations with the Phoenicians (beginning about 1200 B.C.); the name of the settlement may have been derived from the pre-Roman appellation for the Tagus River that runs through the city, Lisso or Lucio; the Romans named the city "Olisippo" when they took it from the Carthaginians in 205 B.C.; under the Visigoths the city name became "Ulixbona," under the Arabs it was "al-Ushbuna"; the medieval version of "Lissabona" became today's Lisboa

citizenship by birth: no
citizenship by descent only: at least one parent must be a citizen of Portugal
dual citizenship recognized: yes
residency requirement for naturalization: 10 years; 6 years if from a Portuguese-speaking country

chief of state: President Marcelo REBELO DE SOUSA (since 9 March 2016)
head of government: Prime Minister Antonio Luis Santos da COSTA (since 24 November 2015)
cabinet: Council of Ministers appointed by the president on the recommendation of the prime minister
elections/appointments: president directly elected by absolute majority popular vote in 2 rounds if needed for a 5-year term (eligible for a second term); election last held on 24 January 2016 (next to be held in January 2021); following legislative elections the leader of the majority party or majority coalition is usually appointed prime minister by the president
election results: Marcelo REBELO DE SOUSA elected president in the first round; percent of vote - Marcelo REBELO DE SOUSA (PSD) 52%, Antonio Sampaio da NOVOA (independent) 22.9%, Marisa MATIAS (BE) 10.1%, Maria de BELEM (independent) 4.2%, other 10.8%
note: there is also a Council of State that acts as a consultative body to the president

two vertical bands of green (hoist side, two-fifths) and red (three-fifths) with the national coat of arms (armillary sphere and Portuguese shield) centered on the dividing line; explanations for the color meanings are ambiguous, but a popular interpretation has green symbolizing hope and red the blood of those defending the nation

name: "A Portugesa" (The Song of the Portuguese)
lyrics/music: Henrique LOPES DE MENDOCA/Alfredo KEIL
note: adopted 1910; "A Portuguesa" was originally written to protest the Portuguese monarchy's acquiescence to the 1890 British ultimatum forcing Portugal to give up areas of Africa; the lyrics refer to the "insult" that resulted from the event

Portugal has become a diversified and increasingly service-based economy since joining the European Community - the EU's predecessor - in 1986. Over the following two decades, successive governments privatized many state-controlled firms and liberalized key areas of the economy, including the financial and telecommunications sectors. The country joined the Economic and Monetary Union in 1999 and began circulating the euro on 1 January 2002 along with 11 other EU members.The economy grew by more than the EU average for much of the 1990s, but the rate of growth slowed in 2001-08. After the global financial crisis in 2008, Portugal’s economy contracted in 2009 and fell into recession from 2011 to 2013, as the government implemented spending cuts and tax increases to comply with conditions of an EU-IMF financial rescue package, signed in May 2011. Portugal successfully exited its EU-IMF program in May 2014, and its economic recovery gained traction in 2015 because of strong exports and a rebound in private consumption. GDP growth accelerated in 2016, and probably reached 2.5 % in 2017. Unemployment remained high, at 9.7% in 2017, but has improved steadily since peaking at 18% in 2013.The center-left minority Socialist government has unwound some unpopular austerity measures while managing to remain within most EU fiscal targets. The budget deficit fell from 11.2% of GDP in 2010 to 1.8% in 2017, the country’s lowest since democracy was restored in 1974, and surpassing the EU and IMF projections of 3%. Portugal exited the EU’s excessive deficit procedure in mid-2017.

125.7% of GDP (2017 est.)
129.9% of GDP (2016 est.)
note: data cover general government debt and include debt instruments issued (or owned) by government entities other than the treasury; the data include treasury debt held by foreign entities; the data include debt issued by subnational entities, as well as intragovernmental debt; intragovernmental debt consists of treasury borrowings from surpluses in the social funds, such as for retirement, medical care, and unemployment; debt instruments for the social funds are not sold at public auctions
country comparison to the world: 9

0% (2016)
0.05% (2015)
note: this is the European Central Bank's rate on the marginal lending facility, which offers overnight credit to banks in the euro area
country comparison to the world: 159

$106.8 billion (31 December 2017 est.)
$81.15 billion (31 December 2016 est.)
note: see entry for the European Union for money supply for the entire euro area; the European Central Bank (ECB) controls monetary policy for the 18 members of the Economic and Monetary Union (EMU); individual members of the EMU do not control the quantity of money circulating within their own borders
country comparison to the world: 38

Portuguese Armed Forces:  Portuguese Army (Exercito Portuguesa), Portuguese Navy (Marinha Portuguesa; includes Marine Corps), Portuguese Air Force (Forca Aerea Portuguesa, FAP); Portuguese National Republican Guard (Guarda Nacional Republicana, GNR) (2019)
Note:  the GNR is a national gendarmerie force comprised of military personnel with law enforcement, internal security, civil defense, disaster response, and coast guard duties; it is responsible to the Minister of Internal Administration and to the Minister of National Defense; in the event of war or crisis, it may be placed under the Chief of the General Staff of the Armed Forces

18-30 years of age for voluntary or contract military service; no compulsory military service, but conscription possible if insufficient volunteers available; women serve in the armed forces, on naval ships since 1992, but are prohibited from serving in some combatant specialties; contract service lasts for an initial period from two to six years, and can be extended to a maximum of 20 years of service. Voluntary military service lasts 12 months; reserve obligation to age 35
(2017)