The eastern half of the island of New Guinea - second largest in the world - was divided between Germany (north) and the UK (south) in 1885. The latter area was transferred to Australia in 1902, which occupied the northern portion during World War I and continued to administer the combined areas until independence in 1975. A nine-year secessionist revolt on the island of Bougainville ended in 1997 after claiming some 20,000 lives. Since 2001, Bougainville has experienced autonomy; a referendum asking the population if they would like independence or greater self rule is tentatively scheduled for October 2019.

Oceania, group of islands including the eastern half of the island of New Guinea between the Coral Sea and the South Pacific Ocean, east of Indonesia

population concentrated in the highlands and eastern coastal areas on the island of New Guinea; predominantly a rural distribution with only about one-fifth of the population residing in urban areas

note 1: shares island of New Guinea with Indonesia; generally east-west trending highlands break up New Guinea into diverse ecoregions; one of world's largest swamps along southwest coast note 2: Papua New Guinea is one of the countries along the Ring of Fire, a belt of active volcanoes and earthquake epicenters bordering the Pacific Ocean; up to 90% of the world's earthquakes and some 75% of the world's volcanoes occur within the Ring of Fire

Tok Pisin (official), English (official), Hiri Motu (official), some 839 indigenous languages spoken (about 12% of the world's total); many languages have fewer than 1,000 speakers
note: Tok Pisin, a creole language, is widely used and understood; English is spoken by 1%-2%; Hiri Motu is spoken by less than 2% 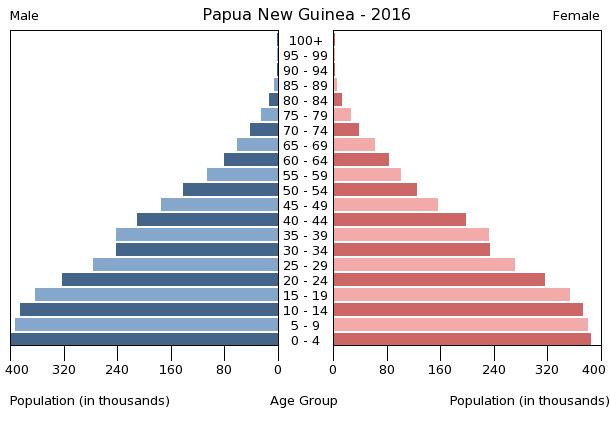 population concentrated in the highlands and eastern coastal areas on the island of New Guinea; predominantly a rural distribution with only about one-fifth of the population residing in urban areas

degree of risk: very high (2016)
food or waterborne diseases: bacterial diarrhea, hepatitis A, and typhoid fever (2016)
vectorborne diseases: dengue fever and malaria (2016)
note: active local transmission of Zika virus by Aedes species mosquitoes has been identified in this country (as of August 2016); it poses an important risk (a large number of cases possible) among US citizens if bitten by an infective mosquito; other less common ways to get Zika are through sex, via blood transfusion, or during pregnancy, in which the pregnant woman passes Zika virus to her fetus

the indigenous population of Papua New Guinea (PNG) is one of the most heterogeneous in the world; PNG has several thousand separate communities, most with only a few hundred people; divided by language, customs, and tradition, some of these communities have engaged in low-scale tribal conflict with their neighbors for millennia; the advent of modern weapons and modern migrants into urban areas has greatly magnified the impact of this lawlessness

16 September 1975 (from the Australia-administered UN trusteeship)

citizenship by birth: no
citizenship by descent only: at least one parent must be a citizen of Papua New Guinea
dual citizenship recognized: no
residency requirement for naturalization: 8 years

divided diagonally from upper hoist-side corner; the upper triangle is red with a soaring yellow bird of paradise centered; the lower triangle is black with five, white, five-pointed stars of the Southern Cross constellation centered; red, black, and yellow are traditional colors of Papua New Guinea; the bird of paradise - endemic to the island of New Guinea - is an emblem of regional tribal culture and represents the emergence of Papua New Guinea as a nation; the Southern Cross, visible in the night sky, symbolizes Papua New Guinea's connection with Australia and several other countries in the South Pacific

Papua New Guinea (PNG) is richly endowed with natural resources, but exploitation has been hampered by rugged terrain, land tenure issues, and the high cost of developing infrastructure. The economy has a small formal sector, focused mainly on the export of those natural resources, and an informal sector, employing the majority of the population. Agriculture provides a subsistence livelihood for 85% of the people. The global financial crisis had little impact because of continued foreign demand for PNG's commodities.Mineral deposits, including copper, gold, and oil, account for nearly two-thirds of export earnings. Natural gas reserves amount to an estimated 155 billion cubic meters. Following construction of a $19 billion liquefied natural gas (LNG) project, PNG LNG, a consortium led by ExxonMobil, began exporting liquefied natural gas to Asian markets in May 2014. The project was delivered on time and only slightly above budget. The success of the project has encouraged other companies to look at similar LNG projects. French supermajor Total is hopes to begin construction on the Papua LNG project by 2020. Due to lower global commodity prices, resource revenues of all types have fallen dramatically. PNG’s government has recently been forced to adjust spending levels downward.Numerous challenges still face the government of Peter O'NEILL, including providing physical security for foreign investors, regaining investor confidence, restoring integrity to state institutions, promoting economic efficiency by privatizing moribund state institutions, and maintaining good relations with Australia, its former colonial ruler. Other socio-cultural challenges could upend the economy including chronic law and order and land tenure issues. In August, 2017, PNG launched its first-ever national trade policy, PNG Trade Policy 2017-2032. The policy goal is to maximize trade and investment by increasing exports, to reduce imports, and to increase foreign direct investment (FDI).

16 years of age for voluntary military service (with parental consent); no conscription; graduation from grade 12 required (2013)

relies on assistance from Australia to keep out illegal cross-border activities from primarily Indonesia, including goods smuggling, illegal narcotics trafficking, and squatters and secessionists

current situation: Papua New Guinea is a source and destination country for men, women, and children subjected to sex trafficking and forced labor; foreign and Papua New Guinean women and children are subjected to sex trafficking, domestic servitude, forced begging, and street vending; parents may sell girls into forced marriages to settle debts or as peace offerings or trade them to another tribe to forge a political alliance, leaving them vulnerable to forced domestic service, or, in urban areas, they may prostitute their children for income or to pay school fees; Chinese, Malaysian, and local men are forced to labor in logging and mining camps through debt bondage schemes; migrant women from Indonesia, Malaysia, Thailand, China, and the Philippines are subjected to sex trafficking and domestic servitude at logging and mining camps, fisheries, and entertainment sites
tier rating: Tier 2 Watch List - Papua New Guinea does not fully comply with the minimum standards for the elimination of trafficking; however, it is making significant efforts to do so; the Criminal Code Amendment of 2013, which prohibits all forms of trafficking was brought into force in 2014; the government also formed an anti-trafficking committee, which drafted a national action plan; despite corruption problems, trafficking-related crimes were prosecuted in village courts rather than criminal courts, resulting in restitution to the victim but no prison time for offenders; the government did not investigate, prosecute, or convict any officials or law enforcement personnel complicit in trafficking offenses; the government made no efforts to proactively identify trafficking victims, has no formal victim identification and referral mechanism, and does not provide care facilities to victims or funding to shelters run by NGOs or international organizations (2015)