Since independence from Portugal in 1974, Guinea-Bissau has experienced considerable political and military upheaval. In 1980, a military coup established authoritarian General Joao Bernardo 'Nino' VIEIRA as president. Despite eventually setting a path to a market economy and multiparty system, VIEIRA's regime was characterized by the suppression of political opposition and the purging of political rivals. Several coup attempts through the 1980s and early 1990s failed to unseat him. In 1994 VIEIRA was elected president in the country's first free, multiparty election. A military mutiny and resulting civil war in 1998 eventually led to VIEIRA's ouster in May 1999. In February 2000, a transitional government turned over power to opposition leader Kumba YALA after he was elected president in transparent polling. In September 2003, after only three years in office, YALA was overthrown in a bloodless military coup, and businessman Henrique ROSA was sworn in as interim president. In 2005, former President VIEIRA was reelected, pledging to pursue economic development and national reconciliation; he was assassinated in March 2009. Malam Bacai SANHA was elected in an emergency election held in June 2009, but he passed away in January 2012 from a long-term illness. A military coup in April 2012 prevented Guinea-Bissau's second-round presidential election - to determine SANHA's successor - from taking place. Following mediation by the Economic Community of Western African States, a civilian transitional government assumed power in 2012 and remained until Jose Mario VAZ won a free and fair election in 2014. Beginning in 2015, a political dispute between factions in the ruling PAIGC party brought government gridlock. It was not until April 2018 that a consensus prime minister could be appointed, the national legislature reopened (having been closed for two years), and a new government formed under Prime Minister Aristides GOMES. In March 2019, the government held legislative elections, voting in the PAIGC as the ruling party; however, President VAZ continues to perpetuate a political stalemate by refusing to name PAICG President Domingos SIMOES PEREIRA Prime Minister.

slightly less than three times the size of Connecticut

Guinea-Bissau’s young and growing population is sustained by high fertility; approximately 60% of the population is under the age of 25. Its large reproductive-age population and total fertility rate of more than 4 children per woman offsets the country’s high infant and maternal mortality rates. The latter is among the world’s highest because of the prevalence of early childbearing, a lack of birth spacing, the high percentage of births outside of health care facilities, and a shortage of medicines and supplies.Guinea-Bissau’s history of political instability, a civil war, and several coups (the latest in 2012) have resulted in a fragile state with a weak economy, high unemployment, rampant corruption, widespread poverty, and thriving drug and child trafficking. With the country lacking educational infrastructure, school funding and materials, and qualified teachers, and with the cultural emphasis placed on religious education, parents frequently send boys to study in residential Koranic schools (daaras) in Senegal and The Gambia. They often are extremely deprived and are forced into street begging or agricultural work by marabouts (Muslim religious teachers), who enrich themselves at the expense of the children. Boys who leave their marabouts often end up on the streets of Dakar or other large Senegalese towns and are vulnerable to even worse abuse.Some young men lacking in education and job prospects become involved in the flourishing international drug trade. Local drug use and associated violent crime are growing. 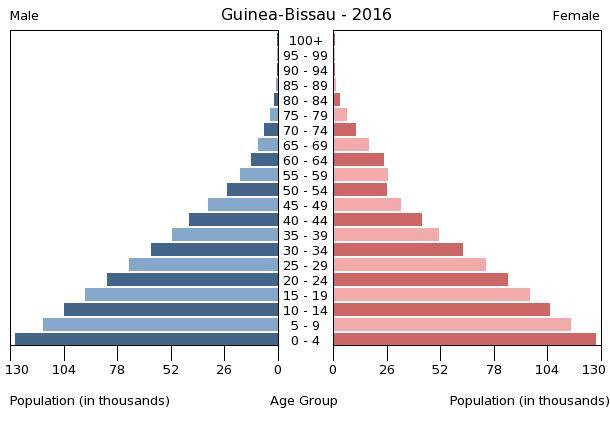 history: promulgated 16 May 1984; note - constitution suspended following military coup in April 2012 and restored in 2014
amendments: proposed by the National People’s Assembly if supported by at least one third of its members, by the Council of State (a presidential consultant body), or by the government; passage requires approval by at least two-thirds majority vote of the Assembly; constitutional articles on the republican and secular form of government and national sovereignty cannot be amended; amended 1991, 1993, 1996 (2017)

chief of state: President Jose Mario VAZ (since 17 June 2014)
head of government: (vacant)
cabinet: Cabinet nominated by the prime minister, appointed by the president
elections/appointments: president directly elected by absolute majority popular vote in 2 rounds if needed for a 5-year term; election last held on 13 April 2014 with a runoff on 18 May 2014 (next to be held on 24 November 2019); prime minister appointed by the president after consultation with party leaders in the National People's Assembly; note - the president cannot apply for a third consecutive term, nor during the 5 years following the end of the second term
election results: Jose Mario VAZ elected president in second round; percent of vote in first round - Jose Mario VAZ (PAIGC) 41%, Nuno Gomez NABIAM (independent) 25.1%, other 33.9%; percent of vote in second round - Jose Mario VAZ 61.9%, Nuno Gomez NABIAM 38.1%

none; note - Guinea-Bissau does not have official representation in Washington, DC

the US Embassy suspended operations on 14 June 1998; the US Ambassador to Senegal is accredited to Guinea-Bissau

two equal horizontal bands of yellow (top) and green with a vertical red band on the hoist side; there is a black five-pointed star centered in the red band; yellow symbolizes the sun; green denotes hope; red represents blood shed during the struggle for independence; the black star stands for African unity
note: uses the popular Pan-African colors of Ethiopia; the flag design was heavily influenced by the Ghanaian flag

name: "Esta e a Nossa Patria Bem Amada" (This Is Our Beloved Country)
lyrics/music: Amilcar Lopes CABRAL/XIAO He
note: adopted 1974; a delegation from then Portuguese Guinea visited China in 1963 and heard music by XIAO He; Amilcar Lopes CABRAL, the leader of Guinea-Bissau's independence movement, asked the composer to create a piece that would inspire his people to struggle for independence

Guinea-Bissau is highly dependent on subsistence agriculture, cashew nut exports, and foreign assistance. Two out of three Bissau-Guineans remain below the absolute poverty line. The legal economy is based on cashews and fishing. Illegal logging and trafficking in narcotics also play significant roles. The combination of limited economic prospects, weak institutions, and favorable geography have made this West African country a way station for drugs bound for Europe.Guinea-Bissau has substantial potential for development of mineral resources, including phosphates, bauxite, and mineral sands. Offshore oil and gas exploration has begun. The country’s climate and soil make it feasible to grow a wide range of cash crops, fruit, vegetables, and tubers; however, cashews generate more than 80% of export receipts and are the main source of income for many rural communities.The government was deposed in August 2015, and since then, a political stalemate has resulted in weak governance and reduced donor support.The country is participating in a three-year, IMF extended credit facility program that was suspended because of a planned bank bailout. The program was renewed in 2017, but the major donors of direct budget support (the EU, World Bank, and African Development Bank) have halted their programs indefinitely. Diversification of the economy remains a key policy goal, but Guinea-Bissau’s poor infrastructure and business climate will constrain this effort.

0
country comparison to the world: 220

(rivers are partially navigable; many inlets and creeks provide shallow-water access to much of interior) (2012)

a longstanding low-grade conflict continues in parts ofCasamance, in Senegal across the border; some rebels use Guinea-Bissau as a safe haven

current situation: Guinea-Bissau is a source country for children subjected to forced labor and sex trafficking; the extent to which adults are trafficked for forced labor or forced prostitution is unclear; boys are forced into street vending in Guinea-Bissau and manual labor, agriculture, and mining in Senegal, while girls may be forced into street vending, domestic service, and, to a lesser extent, prostitution in Guinea and Senegal; some Bissau-Guinean boys at Koranic schools are forced into begging by religious teachers
tier rating: Tier 3 - Guinea-Bissau does not fully comply with the minimum standards for the elimination of trafficking and is not making significant efforts to do so; despite enacting an anti-trafficking law and adopting a national action plan in 2011, the country failed to demonstrate any notable anti-trafficking efforts for the third consecutive year; existing laws prohibiting all forms of trafficking were not used to prosecute any trafficking offenders in 2014, and only one case of potential child labor trafficking was under investigation; authorities continued to rely entirely on NGOs and international organizations to provide victims with protective services; no trafficking prevention activities were conducted (2015)