Saint Helena is a British Overseas Territory consisting of Saint Helena and Ascension Islands, and the island group of Tristan da Cunha. Saint Helena: Uninhabited when first discovered by the Portuguese in 1502, Saint Helena was garrisoned by the British during the 17th century. It acquired fame as the place of Napoleon BONAPARTE's exile from 1815 until his death in 1821, but its importance as a port of call declined after the opening of the Suez Canal in 1869. During the Anglo-Boer War in South Africa, several thousand Boer prisoners were confined on the island between 1900 and 1903.;Saint Helena is one of the most remote populated places in the world. The British Government committed to building an airport on Saint Helena in 2005. After more than a decade of delays and construction, a commercial air service to South Africa via Namibia was inaugurated in October of 2017. The weekly service to Saint Helena from Johannesburg via Windhoek in Namibia takes just over six hours (including the refueling stop in Windhoek) and replaces the mail ship that had made a five-day journey to the island every three weeks.; Ascension Island: This barren and uninhabited island was discovered and named by the Portuguese in 1503. The British garrisoned the island in 1815 to prevent a rescue of Napoleon from Saint Helena. It served as a provisioning station for the Royal Navy's West Africa Squadron on anti-slavery patrol. The island remained under Admiralty control until 1922, when it became a dependency of Saint Helena. During World War II, the UK permitted the US to construct an airfield on Ascension in support of transatlantic flights to Africa and anti-submarine operations in the South Atlantic. In the 1960s the island became an important space tracking station for the US. In 1982, Ascension was an essential staging area for British forces during the Falklands War. It remains a critical refueling point in the air-bridge from the UK to the South Atlantic.;The island hosts one of four dedicated ground antennas that assist in the operation of the Global Positioning System (GPS) navigation system (the others are on Diego Garcia (British Indian Ocean Territory), Kwajalein (Marshall Islands), and at Cape Canaveral, Florida (US)). NASA and the US Air Force also operate a Meter-Class Autonomous Telescope (MCAT) on Ascension as part of the deep space surveillance system for tracking orbital debris, which can be a hazard to spacecraft and astronauts. Tristan da Cunha: The island group consists of Tristan da Cunha, Nightingale, Inaccessible, and Gough Islands. Tristan da Cunha, named after its Portuguese discoverer (1506), was garrisoned by the British in 1816 to prevent any attempt to rescue Napoleon from Saint Helena. Gough and Inaccessible Islands have been designated World Heritage Sites. South Africa leases a site for a meteorological station on Gough Island.

slightly more than twice the size of Washington, DC

the islands of this group are of volcanic origin associated with the Atlantic Mid-Ocean Ridge Saint Helena: rugged, volcanic; small scattered plateaus and plains; Ascension: surface covered by lava flows and cinder cones of 44 dormant volcanoes; terrain rises to the east; Tristan da Cunha: sheer cliffs line the coastline of the nearly circular island; the flanks of the central volcanic peak are deeply dissected; narrow coastal plain lies between The Peak and the coastal cliffs

Saint Helena - population is concentrated in and around the capital Jamestown in the northwest, with another significant cluster in the interior Longwood area; Ascension - largest settlement, and location of most of the population, is Georgetown; Tristan da Cunha - most of the nearly 300 inhabitants live in the northern coastal town of Edinburgh of the Seven Seas

Saint Helena harbors at least 40 species of plants unknown elsewhere in the world; Ascension is a breeding ground for sea turtles and sooty terns; Queen Mary's Peak on Tristan da Cunha is the highest island mountain in the South Atlantic and a prominent landmark on the sea lanes around southern Africa

7,841 (July 2018 est.)
note: Saint Helena's statistical agency estimated the enumerated national population (including Ascension Island and Tristan da Cuhna) to be 5,901 in 2016, according to the 2016 census; only Saint Helena, Ascension, and Tristan da Cunha islands are inhabited, none of the other nearby islands/islets are
country comparison to the world: 225

The vast majority of the population of Saint Helena, Ascension, and Tristan da Cunha live on Saint Helena. Ascension has no indigenous or permanent residents and is inhabited only by persons contracted to work on the island (mainly with the UK and US military or in the space and communications industries) or their dependents, while Tristan da Cunha – the main island in a small archipelago – has fewer than 300 residents. The population of Saint Helena consists of the descendants of 17th century British sailors and settlers from the East India Company, African slaves, and indentured servants and laborers from India, Indonesia, and China. Most of the population of Ascension are Saint Helenians, Britons, and Americans, while that of Tristan da Cunha descends from shipwrecked sailors and Saint Helenians.Change in Saint Helena’s population size is driven by net outward migration. Since the 1980s, Saint Helena’s population steadily has shrunk and aged as the birth rate has decreased and many working-age residents left for better opportunities elsewhere. The restoration of British citizenship in 2002 accelerated family emigration; from 1998 to 2008 alone, population declined by about 20%.In the last few years, population has experienced some temporary growth, as foreigners and returning Saint Helenians, have come to build an international airport, but numbers are beginning to fade as the project reaches completion and workers depart. In the long term, once the airport is fully operational, increased access to the remote island has the potential to boost tourism and fishing, provide more jobs for Saint Helenians domestically, and could encourage some ex-patriots to return home. In the meantime, however, Saint Helena, Ascension, and Tristan da Cunha have to contend with the needs of an aging population. The elderly population of the islands has risen from an estimated 9.4% in 1998 to 20.4% in 2016. 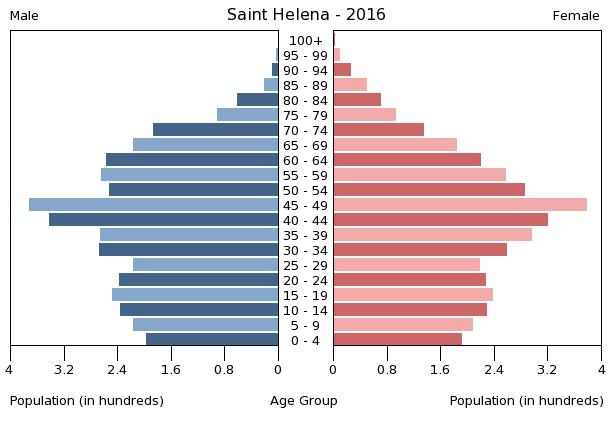 Saint Helena - population is concentrated in and around the capital Jamestown in the northwest, with another significant cluster in the interior Longwood area; Ascension - largest settlement, and location of most of the population, is Georgetown; Tristan da Cunha - most of the nearly 300 inhabitants live in the northern coastal town of Edinburgh of the Seven Seas

conventional long form: Saint Helena, Ascension, and Tristan da Cunha
conventional short form: none
etymology: Saint Helena was discovered in 1502 by Galician navigator Joao da NOVA, sailing in the service of the Kingdom of Portugal, who named it "Santa Helena"; Ascension was named in 1503 by Portuguese navigator Afonso de ALBUQUERQUE who sighted the island on the Feast Day of the Ascension; Tristan da Cunha was discovered in 1506 by Portuguese explorer Tristao da CUNHA who christened the main island after himself (the name was subsequently anglicized)

chief of state: Queen ELIZABETH II (since 6 February 1952)
head of government: Governor Philip RUSHBROOK (since 11 May 2019)
cabinet: Executive Council consists of the governor, 3 ex-officio officers, and 5 elected members of the Legislative Council
elections/appointments: none; the monarchy is hereditary; governor appointed by the monarch
note: the constitution order provides for an administrator for Ascension and Tristan da Cunha appointed by the governor

highest courts: Court of Appeal (consists of the court president and 2 justices); Supreme Court (consists of the chief justice - a nonresident - and NA judges); note - appeals beyond the Court of Appeal are heard by the Judicial Committee of the Privy Council (in London)
judge selection and term of office: Court of Appeal and Supreme Court justices appointed by the governor acting upon the instructions from a secretary of state acting on behalf of Queen ELIZABETH II; justices of both courts serve until retirement at age 70, but terms can be extended
subordinate courts: Magistrates' Court; Small Claims Court; Juvenile Court

The economy depends largely on financial assistance from the UK, which amounted to about $27 million in FY06/07 or more than twice the level of annual budgetary revenues. The local population earns income from fishing, raising livestock, and sales of handicrafts. Because there are few jobs, 25% of the work force has left to seek employment on Ascension Island, on the Falklands, and in the UK.

Ascension Island hosts one of four dedicated ground antennas that assist in the operation of the Global Positioning System (GPS) navigation system (the others are on Diego Garcia (British Indian Ocean Territory), Kwajalein (Marshall Islands), and at Cape Canaveral, Florida (US)); South Africa maintains a meteorological station on Gough Island in the Tristan da Cunha archipelago

the new airport on Saint Helena opened for limited operations in July 2016, and the first commercial flight took place on 14 October 2017, marking the start of weekly air service between Saint Helena and South Africa via Namibia; the military airport on Ascension Island is closed to civilian traffic; there is no air connection to Tristan da Cunha and very limited sea connections making it one of the most isolated communities on the planet