First colonized by the Spanish, the islands came under British control in the early 19th century. The islands' sugar industry was hurt by the emancipation of the slaves in 1834. Manpower was replaced with the importation of contract laborers from India between 1845 and 1917, which boosted sugar production as well as the cocoa industry. The discovery of oil on Trinidad in 1910 added another important export. Independence was attained in 1962. The country is one of the most prosperous in the Caribbean thanks largely to petroleum and natural gas production and processing. Tourism, mostly in Tobago, is targeted for expansion and is growing. The government is struggling to reverse a surge in violent crime.

Caribbean, islands between the Caribbean Sea and the North Atlantic Ocean, northeast of Venezuela

mostly plains with some hills and low mountains

outside usual path of hurricanes and other tropical storms

noun: Trinidadian(s), Tobagonian(s)
adjective: Trinidadian, Tobagonian
note: Trinbagonian is used on occasion to describe a citizen of the country without specifying the island of origin 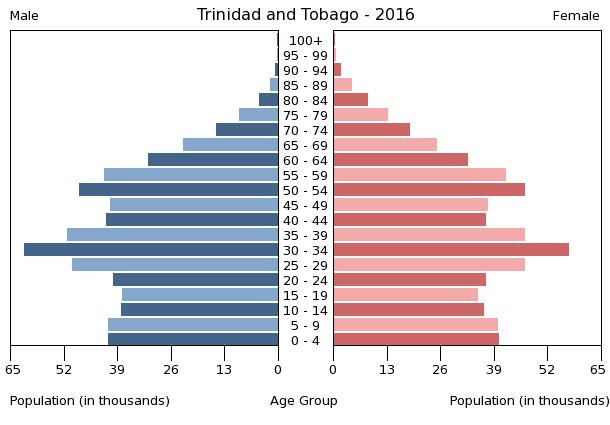 conventional long form: Republic of Trinidad and Tobago
conventional short form: Trinidad and Tobago
etymology: explorer Christopher COLUMBUS named the larger island "La Isla de la Trinidad" (The Island of the Trinity) on 31 July 1498 on his third voyage; the tobacco grown and smoked by the natives of the smaller island or its elongated cigar shape may account for the "tobago" name, which is spelled "tobaco" in Spanish

name: Port of Spain
geographic coordinates: 10 39 N, 61 31 W
time difference: UTC-4 (1 hour ahead of Washington, DC, during Standard Time)
etymology: the name dates to the period of Spanish colonial rule (16th to late 18th centuries) when the city was referred to as "Puerto de Espana"; the name was anglicized following the British capture of Trinidad in 1797

history: previous 1962; latest 1976
amendments: proposed by Parliament; passage of amendments affecting constitutional provisions, such as human rights and freedoms or citizenship, requires at least two-thirds majority vote by the membership of both houses and assent of the president; passage of amendments, such as the powers and authorities of the executive, legislative, and judicial branches of government, and the procedure for amending the constitution, requires at least three-quarters majority vote by the House membership, two-thirds majority vote by the Senate membership, and assent of the president; amended many times, last in 2007 (2018)

chief of state: President Paula-Mae WEEKES (since 19 March 2018)
head of government: Prime Minister Keith ROWLEY (since 9 September 2015)
cabinet: Cabinet appointed from among members of Parliament
elections/appointments: president indirectly elected by an electoral college of selected Senate and House of Representatives members for a 5-year term (eligible for a second term); election last held on 19 January 2018 (next to be held by February 2023); the president usually appoints the leader of the majority party in the House of Representatives as prime minister
election results: Paula-Mae WEEKES (independent) elected president; ran unopposed and was elected without a vote; she is Trinidad and Tabago's first female head of state

description: bicameral Parliament consists of:
Senate (31 seats; 16 members appointed by the ruling party, 9 by the president, and 6 by the opposition party; members serve 5-year terms;)
House of Representatives 42 seats; 41 members directly elected in single-seat constituencies by simple majority vote and the house speaker - usually designated from outside Parliament; members serve 5-year terms)
elections: Senate - last appointments on 23 September 2015 (next in 2020)
House of Representatives - last held on 7 September 2015 (next to be held in 2020)
election results: Senate - percent by party - NA; seats by party - NA; composition - men 21, women 10, percent of women 32.3%
House of Representatives - percent of vote - PNM 51.7%, People's Partnership coalition 46.6% (UNC 39.6%, COP 6%, other coalition 1%), other 1.7%; seats by party - PNM 23, UNC 17, COP 1; composition - men 29, women 13, percent of women 31%; note - total Parliament percent of women 31.5%
note: Tobago has a unicameral House of Assembly (16 seats; 12 assemblymen directly elected by simple majority vote and 4 appointed councillors - 3 on the advice of the chief secretary and 1 on the advice of the minority leader; members serve 4-year terms)

highest courts: Supreme Court of the Judicature (consists of a chief justice for both the Court of Appeal with 12 judges and the High Court with 24 judges); note - Trinidad and Tobago can file appeals beyond its Supreme Court to the Caribbean Court of Justice, with final appeal to the Judicial Committee of the Privy Council (in London)
judge selection and term of office: Supreme Court chief justice appointed by the president after consultation with the prime minister and the parliamentary leader of the opposition; other judges appointed by the Judicial Legal Services Commission, headed by the chief justice and 5 members with judicial experience; all judges serve for life with mandatory retirement normally at age 65
subordinate courts: Courts of Summary Criminal Jurisdiction; Petty Civil Courts; Family Court

red with a white-edged black diagonal band from the upper hoist side to the lower fly side; the colors represent the elements of earth, water, and fire; black stands for the wealth of the land and the dedication of the people; white symbolizes the sea surrounding the islands, the purity of the country's aspirations, and equality; red symbolizes the warmth and energy of the sun, the vitality of the land, and the courage and friendliness of its people

name: Forged From the Love of Liberty
lyrics/music: Patrick Stanislaus CASTAGNE
note: adopted 1962; song originally created to serve as an anthem for the West Indies Federation; adopted by Trinidad and Tobago following the Federation's dissolution in 1962

Trinidad and Tobago relies on its energy sector for much of its economic activity, and has one of the highest per capita incomes in Latin America. Economic growth between 2000 and 2007 averaged slightly over 8% per year, significantly above the regional average of about 3.7% for that same period; however, GDP has slowed down since then, contracting during 2009-12, making small gains in 2013 and contracting again in 2014-17. Trinidad and Tobago is buffered by considerable foreign reserves and a sovereign wealth fund that equals about one-and-a-half times the national budget, but the country is still in a recession and the government faces the dual challenge of gas shortages and a low price environment. Large-scale energy projects in the last quarter of 2017 are helping to mitigate the gas shortages.Energy production and downstream industrial use dominate the economy. Oil and gas typically account for about 40% of GDP and 80% of exports but less than 5% of employment. Trinidad and Tobago is home to one of the largest natural gas liquefaction facilities in the Western Hemisphere. The country produces about nine times more natural gas than crude oil on an energy equivalent basis with gas contributing about two-thirds of energy sector government revenue. The US is the country’s largest trading partner, accounting for 28% of its total imports and 48% of its exports.Economic diversification is a longstanding government talking point, and Trinidad and Tobago has much potential due to its stable, democratic government and its educated, English speaking workforce. The country is also a regional financial center with a well-regulated and stable financial system. Other sectors the Government of Trinidad and Tobago has targeted for increased investment and projected growth include tourism, agriculture, information and communications technology, and shipping. Unfortunately, a host of other factors, including low labor productivity, inefficient government bureaucracy, and corruption, have hampered economic development.

6 free-to-air TV networks, 2 of which are state-owned; 24 subscription providers (cable and satellite); over 36 radio frequencies (2019)

18-25 years of age for voluntary military service (some age variations between services, reserves); no conscription (2019)

current situation: Trinidad and Tobago is a destination, transit, and possible source country for adults and children subjected to sex trafficking and forced labor; women and girls from Venezuela, the Dominican Republic, Guyana, and Colombia have been subjected to sex trafficking in Trinidad and Tobago’s brothels and clubs; some economic migrants from the Caribbean region and Asia are vulnerable to forced labor in domestic service and the retail sector; the steady flow of vessels transiting Trinidad and Tobago’s territorial waters may also increase opportunities for forced labor for fishing; international crime organizations are increasingly involved in trafficking, and boys are coerced to sell drugs and guns; corruption among police and immigration officials impedes anti-trafficking efforts
tier rating: Tier 2 Watch List – Trinidad and Tobago does not fully comply with the minimum standards for the elimination of trafficking; however, it is making significant efforts to do so; anti-trafficking law enforcement efforts decreased from the initiation of 12 prosecutions in 2013 to 1 in 2014; the government has yet to convict anyone under its 2011 anti-trafficking law, and all prosecutions from previous years remain pending; the government sustained efforts to identify victims and to refer them for care at NGO facilities, which it provided with funding; the government failed to draft a national action plan as mandated under the 2011 anti-trafficking law and did not launch a sufficiently robust awareness campaign to educate the public and officials (2015)

transshipment point for South American drugs destined for the US and Europe; producer of cannabis

Flag of Trinidad and Tobago