First inhabited by Austronesian people, Taiwan became home to Han immigrants beginning in the late Ming Dynasty (17th century). In 1895, military defeat forced China's Qing Dynasty to cede Taiwan to Japan, which then governed Taiwan for 50 years. Taiwan came under Chinese Nationalist (Kuomintang, KMT) control after World War II. With the communist victory in the Chinese civil war in 1949, the Nationalist-controlled Republic of China government and 2 million Nationalists fled to Taiwan and continued to claim to be the legitimate government for mainland China and Taiwan based on a 1947 Constitution drawn up for all of China. Until 1987, however, the Nationalist government ruled Taiwan under a civil war martial law declaration dating to 1948. Beginning in the 1970s, Nationalist authorities gradually began to incorporate the native population into the governing structure beyond the local level. The democratization process expanded rapidly in the 1980s, leading to the then illegal founding of Taiwan’s first opposition party (the Democratic Progressive Party or DPP) in 1986 and the lifting of martial law the following year. Taiwan held legislative elections in 1992, the first in over forty years, and its first direct presidential election in 1996. In the 2000 presidential elections, Taiwan underwent its first peaceful transfer of power with the KMT loss to the DPP and afterwards experienced two additional democratic transfers of power in 2008 and 2016. Throughout this period, the island prospered, became one of East Asia's economic "Tigers," and after 2000 became a major investor in mainland China as cross-Strait ties matured. The dominant political issues continue to be economic reform and growth as well as management of sensitive relations between Taiwan and China.

earthquakes; typhoons volcanism: Kueishantao Island (401 m), east of Taiwan, is its only historically active volcano, although it has not erupted in centuries

party to: none of the selected agreements because of Taiwan's international status

noun: Taiwan (singular and plural)
adjective: Taiwan (or Taiwanese)
note: example - he or she is from Taiwan; they are from Taiwan

note 2: although not definitive, the majority of current genetic, archeological, and linguistic data support the theory that Taiwan is the ultimate source for the spread of humans across the Pacific to Polynesia; the expansion (ca. 3000 B.C. to A.D. 1200) took place via the Philippines and eastern Indonesia and reached Fiji and Tonga by about 900 B.C.; from there voyagers spread across all of the rest of the Pacific islands over the next two millennia 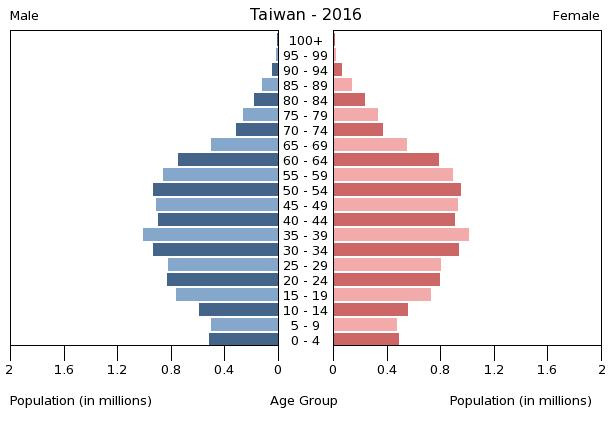 history: previous 1912, 1931; latest adopted 25 December 1946, promulgated 1 January 1947, effective 25 December 1947
amendments: proposed by at least one fourth of the Legislative Yuan membership; passage requires approval by at least three-fourths majority vote of at least three fourths of the Legislative Yuan membership and approval in a referendum by more than half of eligible voters; revised several times, last in 2005 (2017)

20 years of age; universal; note - in mid-2016, the Legislative Yuan drafted a constitutional amendment to reduce the voting age to 18, but it has not passed as of December 2017

chief of state: President TSAI Ing-wen (since 20 May 2016); Vice President CHEN Chien-jen (since 20 May 2016)
head of government: Premier SU Tseng-chang (President of the Executive Yuan) (since 11 January 2019); Vice Premier SHIH Jun-ji, Vice President of the Executive Yuan (since 8 September 2017)
cabinet: Executive Yuan - ministers appointed by president on recommendation of premier
elections/appointments: president and vice president directly elected on the same ballot by simple majority popular vote for a 4-year term (eligible for a second term); election last held on 16 January 2016 (next to be held on 11 January 2020); premier appointed by the president; vice premiers appointed by the president on the recommendation of the premier
election results: TSAI Ing-wen elected president; percent of vote - TSAI Ing-wen (DPP) 56.1%, Eric CHU Li-lun (KMT) 31.0%, James SOONG Chu-yu (PFP) 12.8%; note - TSAI is the first woman elected president of Taiwan

chief of mission: the US does not have an embassy in Taiwan; commercial and cultural relations with the people of Taiwan are maintained through an unofficial instrumentality, the American Institute in Taiwan (AIT), a private nonprofit corporation that performs citizen and consular services similar to those at diplomatic posts; it is managed by Director William Brent CHRISTENSEN (since 11 August 2018); telephone [886] 7-335-5006; FAX [886] 7-338-0551
office: #7 Lane 134, Hsin Yi Road, Section 3, Taipei 10659, Taiwan
other offices: Kaohsiung (Branch Office)

red field with a dark blue rectangle in the upper hoist-side corner bearing a white sun with 12 triangular rays; the blue and white design of the canton (symbolizing the sun of progress) dates to 1895; it was later adopted as the flag of the Kuomintang Party; blue signifies liberty, justice, and democracy, red stands for fraternity, sacrifice, and nationalism, and white represents equality, frankness, and the people's livelihood; the 12 rays of the sun are those of the months and the twelve traditional Chinese hours (each ray equals two hours)
note: similar to the flag of Samoa

name: "Zhonghua Minguo guoge" (National Anthem of the Republic of China)
lyrics/music: HU Han-min, TAI Chi-t'ao, and LIAO Chung-k'ai/CHENG Mao-Yun
note: adopted 1930; also the song of the Kuomintang Party; it is informally known as "San Min Chu I" or "San Min Zhu Yi" (Three Principles of the People); because of political pressure from China, "Guo Qi Ge" (National Banner Song) is used at international events rather than the official anthem of Taiwan; the "National Banner Song" has gained popularity in Taiwan and is commonly used during flag raisings

Taiwan has a dynamic capitalist economy that is driven largely by industrial manufacturing, and especially exports of electronics, machinery, and petrochemicals. This heavy dependence on exports exposes the economy to fluctuations in global demand. Taiwan's diplomatic isolation, low birth rate, rapidly aging population, and increasing competition from China and other Asia Pacific markets are other major long-term challenges.Following the landmark Economic Cooperation Framework Agreement (ECFA) signed with China in June 2010, Taiwan in July 2013 signed a free trade deal with New Zealand - Taipei’s first-ever with a country with which it does not maintain diplomatic relations - and, in November of that year, inked a trade pact with Singapore. However, follow-on components of the ECFA, including a signed agreement on trade in services and negotiations on trade in goods and dispute resolution, have stalled. In early 2014, the government bowed to public demand and proposed a new law governing the oversight of cross-Strait agreements, before any additional deals with China are implemented; the legislature has yet to vote on such legislation, leaving the future of ECFA uncertain. President TSAI since taking office in May 2016 has promoted greater economic integration with South and Southeast Asia through the New Southbound Policy initiative and has also expressed interest in Taiwan joining the Trans-Pacific Partnership as well as bilateral trade deals with partners such as the US. These overtures have likely played a role in increasing Taiwan’s total exports, which rose 11% during the first half of 2017, buoyed by strong demand for semiconductors.Taiwan's total fertility rate of just over one child per woman is among the lowest in the world, raising the prospect of future labor shortages, falling domestic demand, and declining tax revenues. Taiwan's population is aging quickly, with the number of people over 65 expected to account for nearly 20% of the island's total population by 2025.The island runs a trade surplus with many economies, including China and the US, and its foreign reserves are the world's fifth largest, behind those of China, Japan, Saudi Arabia, and Switzerland. In 2006, China overtook the US to become Taiwan's second-largest source of imports after Japan. China is also the island's number one destination for foreign direct investment. Taiwan since 2009 has gradually loosened rules governing Chinese investment and has also secured greater market access for its investors on the mainland. In August 2012, the Taiwan Central Bank signed a memorandum of understanding (MOU) on cross-Strait currency settlement with its Chinese counterpart. The MOU allows for the direct settlement of Chinese renminbi (RMB) and the New Taiwan dollar across the Strait, which has helped Taiwan develop into a local RMB hub.Closer economic links with the mainland bring opportunities for Taiwan’s economy but also pose challenges as political differences remain unresolved and China’s economic growth is slowing. President TSAI’s administration has made little progress on the domestic economic issues that loomed large when she was elected, including concerns about stagnant wages, high housing prices, youth unemployment, job security, and financial security in retirement. TSAI has made more progress on boosting trade with South and Southeast Asia, which may help insulate Taiwan’s economy from a fall in mainland demand should China’s growth slow in 2018.

starting with those born in 1994, males 18-36 years of age may volunteer for military service or must complete 4 months of compulsory military training (or substitute civil service in some cases); men born before December 1993 are required to complete compulsory service for 1 year (military or civil); men are subject to training recalls up to four times for periods not to exceed 20 days for 8 years after discharge; women may enlist, but are restricted to noncombat roles in most cases; as part of its transition to an all-volunteer military in December 2018, the last cohort of one-year military conscripts completed their service obligations (2019)

involved in complex dispute with Brunei, China, Malaysia, the Philippines, and Vietnam over the Spratly Islands, and with China and the Philippines over Scarborough Reef; the 2002 "Declaration on the Conduct of Parties in the South China Sea" has eased tensions but falls short of a legally binding "code of conduct" desired by several of the disputants; Paracel Islands are occupied by China, but claimed by Taiwan and Vietnam; in 2003, China and Taiwan became more vocal in rejecting both Japan's claims to the uninhabited islands of the Senkaku-shoto (Diaoyu Tai) and Japan's unilaterally declared exclusive economic zone in the East China Sea where all parties engage in hydrocarbon prospecting