Present-day Turkmenistan covers territory that has been at the crossroads of civilizations for centuries. The area was ruled in antiquity by various Persian empires, and was conquered by Alexander the Great, Muslim armies, the Mongols, Turkic warriors, and eventually the Russians. In medieval times, Merv (located in present-day Mary province) was one of the great cities of the Islamic world and an important stop on the Silk Road. Annexed by Russia in the late 1800s, Turkmenistan later figured prominently in the anti-Bolshevik movement in Central Asia. In 1924, Turkmenistan became a Soviet republic; it achieved independence upon the dissolution of the USSR in 1991. President for Life Saparmyrat NYYAZOW died in December 2006, and Gurbanguly BERDIMUHAMEDOW, a deputy chairman under NYYAZOW, emerged as the country's new president. BERDIMUHAMEDOW won Turkmenistan's first multi-candidate presidential election in February 2007, and again in 2012 and in 2017 with over 97% of the vote in both instances, in elections widely regarded as undemocratic.

Turkmenistan has sought new export markets for its extensive hydrocarbon/natural gas reserves, which have yet to be fully exploited. As of late 2019, Turkmenistan exported the majority of its gas to China and small levels of gas were also being sent to Russia. Turkmenistan's reliance on gas exports has made the economy vulnerable to fluctuations in the global energy market, and economic hardships since the drop in energy prices in 2014 have led many Turkmenistanis to emigrate, mostly to Turkey.

Central Asia, bordering the Caspian Sea, between Iran and Kazakhstan

slightly more than three times the size of Georgia; slightly larger than California

flat-to-rolling sandy desert with dunes rising to mountains in the south; low mountains along border with Iran; borders Caspian Sea in west

mean elevation: 230 m
lowest point: Vpadina Akchanaya (Sarygamysh Koli is a lake in northern Turkmenistan with a water level that fluctuates above and below the elevation of Vpadina Akchanaya, the lake has dropped as low as -110 m) -81 m
highest point: Gora Ayribaba 3,139 m

contamination of soil and groundwater with agricultural chemicals, pesticides; salination, water logging of soil due to poor irrigation methods; Caspian Sea pollution; diversion of a large share of the flow of the Amu Darya into irrigation contributes to that river's inability to replenish the Aral Sea; soil erosion; desertification

landlocked; the western and central low-lying desolate portions of the country make up the great Garagum (Kara-Kum) desert, which occupies over 80% of the country; eastern part is plateau

5,411,012 (July 2018 est.)
some sources suggest Turkmenistan's population could be as much as 1 to 2 million people lower than available estimates because of large-scale emigration during the last 10 years
country comparison to the world: 119 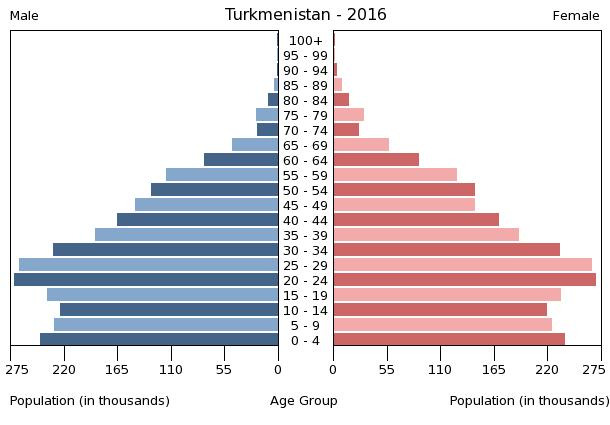 citizenship by birth: no
citizenship by descent only: at least one parent must be a citizen of Turkmenistan
dual citizenship recognized: yes
residency requirement for naturalization: 7 years

green field with a vertical red stripe near the hoist side, containing five tribal guls (designs used in producing carpets) stacked above two crossed olive branches; five white, five-pointed stars and a white crescent moon appear in the upper corner of the field just to the fly side of the red stripe; the green color and crescent moon represent Islam; the five stars symbolize the regions or welayats of Turkmenistan; the guls reflect the national identity of Turkmenistan where carpet-making has long been a part of traditional nomadic life
note: the flag of Turkmenistan is the most intricate of all national flags

Turkmenistan is largely a desert country with intensive agriculture in irrigated oases and significant natural gas and oil resources. The two largest crops are cotton, most of which is produced for export, and wheat, which is domestically consumed. Although agriculture accounts for almost 8% of GDP, it continues to employ nearly half of the country's workforce. Hydrocarbon exports, the bulk of which is natural gas going to China, make up 25% of Turkmenistan’s GDP. Ashgabat has explored two initiatives to bring gas to new markets: a trans-Caspian pipeline that would carry gas to Europe and the Turkmenistan-Afghanistan-Pakistan-India gas pipeline. Both face major financing, political, and security hurdles and are unlikely to be completed soon.Turkmenistan’s autocratic governments under presidents NIYAZOW (1991-2006) and BERDIMUHAMEDOW (since 2007) have made little progress improving the business climate, privatizing state-owned industries, combatting corruption, and limiting economic development outside the energy sector. High energy prices in the mid-2000s allowed the government to undertake extensive development and social spending, including providing heavy utility subsidies.Low energy prices since mid-2014 are hampering Turkmenistan’s economic growth and reducing government revenues. The government has cut subsidies in several areas, and wage arrears have increased. In January 2014, the Central Bank of Turkmenistan devalued the manat by 19%, and downward pressure on the currency continues. There is a widening spread between the official exchange rate (3.5 TMM per US dollar) and the black market exchange rate (approximately 14 TMM per US dollar). Currency depreciation and conversion restrictions, corruption, isolationist policies, and declining spending on public services have resulted in a stagnate economy that is nearing crisis. Turkmenistan claims substantial foreign currency reserves, but non-transparent data limit international institutions’ ability to verify this information.

general assessment: telecommunications network is gradually improving for the former Soviet republic; state control over most economic activities has not helped growth; mobile market will see slow growth; some rural areas are still without telephones; mobile broadband is in the early stages of development (2018)
domestic: Turkmentelekom, in cooperation with foreign partners, has installed high-speed fiber-optic lines and has upgraded most of the country's telephone exchanges and switching centers with new digital technology; fixed-line 13 per 100 and mobile-cellular teledensity is about 160 per 100 persons; Russia's Mobile TeleSystems (MTS), the only foreign mobile-cellular service provider in Turkmenistan, suspended operations in September 2017 due to the state-owned telecom company cutting MTS' access to international and long-distance communication services and Internet; Turkmenistan's first telecommunication satellite was launched in 2015 and is expected to greatly improve connectivity in the country (2018)
international: country code - 993; linked by fiber-optic cable and microwave radio relay to other CIS republics and to other countries by leased connections to the Moscow international gateway switch; an exchange in Ashgabat switches international traffic through Turkey via Intelsat; satellite earth stations - 1 Orbita and 1 Intelsat (2018)

cotton monoculture in Uzbekistan and Turkmenistan creates water-sharing difficulties for Amu Darya river states; field demarcation of the boundaries with Kazakhstan commenced in 2005; bilateral talks continue with Azerbaijan on dividing the seabed and contested oilfields in the middle of the Caspian

current situation: Turkmenistan is a source country for men, women, and children subjected to forced labor and sex trafficking; Turkmenistanis who migrate abroad are forced to work in the textile, agriculture, construction, and domestic service industries, while women and girls may also be sex trafficked; in 2014, men surpassed women as victims; Turkey and Russia are primary trafficking destinations, followed by the Middle East, South and Central Asia, and other parts of Europe; Turkmenistanis also experience forced labor domestically in the informal construction industry; participation in the cotton harvest is still mandatory for some public sector employees
tier rating: Tier 2 Watch List – Turkmenistan does not fully comply with the minimum standards for the elimination of trafficking; however, it is making significant efforts to do so; in 2014, Turkmenistan was granted a waiver from an otherwise required downgrade to Tier 3 because its government has a written plan that, if implemented, would constitute making significant efforts to bring itself into compliance with the minimum standards for the elimination of trafficking; the government made some progress in its law enforcement efforts in 2014, convicting more offenders than in 2013; authorities did not make adequate efforts to identify and protect victims and did not fund international organizations or NGOs that offered protective services; some victims were punished for crimes as a result of being trafficked (2015)