Shortly after achieving independence from Britain in the early 1960s, Tanganyika and Zanzibar merged to form the United Republic of Tanzania in 1964. In 1995, the country held its first democratic elections since the 1970s. Zanzibar maintains semi-autonomy and participates in national elections; popular political opposition on the isles led to four contentious elections since 1995, in which the ruling party claimed victory despite international observers' claims of voting irregularities.

Eastern Africa, bordering the Indian Ocean, between Kenya and Mozambique

more than six times the size of Georgia; slightly larger than twice the size of California

varies from tropical along coast to temperate in highlands

the largest and most populous East African country; population distribution is extremely uneven, but greater population clusters occur in the northern half of country and along the east coast

Kilimanjaro is the highest point in Africa and one of only three mountain ranges on the continent that has glaciers (the others are Mount Kenya and the Ruwenzori Mountains); bordered by three of the largest lakes on the continent: Lake Victoria (the world's second-largest freshwater lake) in the north, Lake Tanganyika (the world's second deepest) in the west, and Lake Nyasa (Lake Malawi) in the southwest

55,451,343 (July 2018 est.)
note: estimates for this country explicitly take into account the effects of excess mortality due to AIDS; this can result in lower life expectancy, higher infant mortality, higher death rates, lower population growth rates, and changes in the distribution of population by age and sex than would otherwise be expected
country comparison to the world: 25

mainland - African 99% (of which 95% are Bantu consisting of more than 130 tribes), other 1% (consisting of Asian, European, and Arab); Zanzibar - Arab, African, mixed Arab and African

Kiswahili or Swahili (official), Kiunguja (name for Swahili in Zanzibar), English (official, primary language of commerce, administration, and higher education), Arabic (widely spoken in Zanzibar), many local languages
note: Kiswahili (Swahili) is the mother tongue of the Bantu people living in Zanzibar and nearby coastal Tanzania; although Kiswahili is Bantu in structure and origin, its vocabulary draws on a variety of sources including Arabic and English; it has become the lingua franca of central and eastern Africa; the first language of most people is one of the local languages

Tanzania has the largest population in East Africa and the lowest population density; almost a third of the population is urban. Tanzania’s youthful population – about two-thirds of the population is under 25 – is growing rapidly because of the high total fertility rate of 4.8 children per woman. Progress in reducing the birth rate has stalled, sustaining the country’s nearly 3% annual growth. The maternal mortality rate has improved since 2000, yet it remains very high because of early and frequent pregnancies, inadequate maternal health services, and a lack of skilled birth attendants – problems that are worse among poor and rural women. Tanzania has made strides in reducing under-5 and infant mortality rates, but a recent drop in immunization threatens to undermine gains in child health. Malaria is a leading killer of children under 5, while HIV is the main source of adult mortalityFor Tanzania, most migration is internal, rural to urban movement, while some temporary labor migration from towns to plantations takes place seasonally for harvests. Tanzania was Africa’s largest refugee-hosting country for decades, hosting hundreds of thousands of refugees from the Great Lakes region, primarily Burundi, over the last fifty years. However, the assisted repatriation and naturalization of tens of thousands of Burundian refugees between 2002 and 2014 dramatically reduced the refugee population. Tanzania is increasingly a transit country for illegal migrants from the Horn of Africa and the Great Lakes region who are heading to southern Africa for security reasons and/or economic opportunities. Some of these migrants choose to settle in Tanzania. 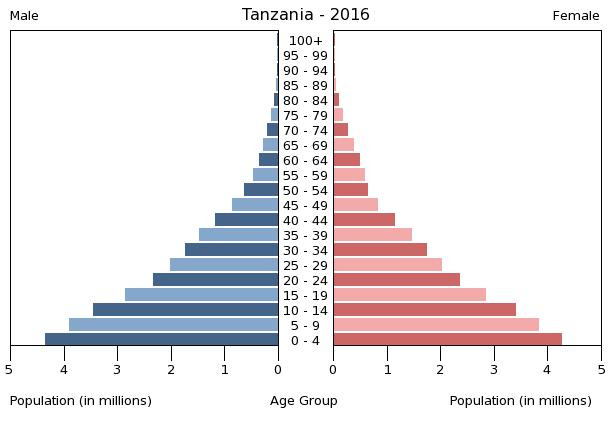 the largest and most populous East African country; population distribution is extremely uneven, but greater population clusters occur in the northern half of country and along the east coast

name: Dar es Salaam (administrative capital), Dodoma (legislative capital); note - Dodoma was designated the national capital in 1996 and serves as the meeting place for the National Assembly; Dar es Salaam remains the de facto capital, the country's largest city and commercial center, and the site of the executive branch offices and diplomatic representation; the government contends that it will complete the transfer of the executive branch to Dodoma by 2020
geographic coordinates: 6 48 S, 39 17 E
time difference: UTC+3 (8 hours ahead of Washington, DC, during Standard Time)
etymology: Dar es Salaam was the name given by Majid bin Said, the first sultan of Zanzibar, to the new city he founded on the Indian Ocean coast; the Arabic name is commonly translated as "abode/home of peace"; Dodoma, in the native Gogo language, means "it has sunk"; supposedly, one day during the rainy season, an elephant drowned in the area; the villagers in that place were so struck by what had occurred, that ever since the locale has been referred to as the place where "it (the elephant) sunk"

history: several previous; latest adopted 25 April 1977; note - progress enacting a new constitution drafted in 2014 by the Constituent Assembly stalled
amendments: proposed by the National Assembly; passage of amendments to constitutional articles including those on sovereignty of the United Republic, the authorities and powers of the government, the president, the Assembly, and the High Court requires two-thirds majority vote of the mainland Assembly membership and of the Zanzibar House of Representatives membership; House of Representatives approval of other amendments is not required; amended several times, last in 2017 (2019)

divided diagonally by a yellow-edged black band from the lower hoist-side corner; the upper triangle (hoist side) is green and the lower triangle is blue; the banner combines colors found on the flags of Tanganyika and Zanzibar; green represents the natural vegetation of the country, gold its rich mineral deposits, black the native Swahili people, and blue the country's many lakes and rivers, as well as the Indian Ocean

name: "Mungu ibariki Afrika" (God Bless Africa)
lyrics/music: collective/Enoch Mankayi SONTONGA
note: adopted 1961; the anthem, which is also a popular song in Africa, shares the same melody with that of Zambia but has different lyrics; the melody is also incorporated into South Africa's anthem

Tanzania has achieved high growth rates based on its vast natural resource wealth and tourism with GDP growth in 2009-17 averaging 6%-7% per year. Dar es Salaam used fiscal stimulus measures and easier monetary policies to lessen the impact of the global recession and in general, benefited from low oil prices. Tanzania has largely completed its transition to a market economy, though the government retains a presence in sectors such as telecommunications, banking, energy, and mining.The economy depends on agriculture, which accounts for slightly less than one-quarter of GDP and employs about 65% of the work force, although gold production in recent years has increased to about 35% of exports. All land in Tanzania is owned by the government, which can lease land for up to 99 years. Proposed reforms to allow for land ownership, particularly foreign land ownership, remain unpopular.The financial sector in Tanzania has expanded in recent years and foreign-owned banks account for about 48% of the banking industry's total assets. Competition among foreign commercial banks has resulted in significant improvements in the efficiency and quality of financial services, though interest rates are still relatively high, reflecting high fraud risk. Banking reforms have helped increase private-sector growth and investment.The World Bank, the IMF, and bilateral donors have provided funds to rehabilitate Tanzania's aging infrastructure, including rail and port, which provide important trade links for inland countries. In 2013, Tanzania completed the world's largest Millennium Challenge Compact (MCC) grant, worth $698 million, but in late 2015, the MCC Board of Directors deferred a decision to renew Tanzania’s eligibility because of irregularities in voting in Zanzibar and concerns over the government's use of a controversial cybercrime bill.The new government elected in 2015 has developed an ambitious development agenda focused on creating a better business environment through improved infrastructure, access to financing, and education progress, but implementing budgets remains challenging for the government. Recent policy moves by President MAGUFULI are aimed at protecting domestic industry and have caused concern among foreign investors.

The International Maritime Bureau reports that shipping in territorial and offshore waters in the Indian Ocean remain at risk for piracy and armed robbery against ships, especially as Somali-based pirates extend their activities south; numerous commercial vessels have been attacked and hijacked both at anchor and while underway; crews have been robbed and stores or cargoes stolen.

(Lake Tanganyika, Lake Victoria, and Lake Nyasa (Lake Malawi) are the principal avenues of commerce with neighboring countries; the rivers are not navigable) (2011)

dispute with Tanzania over the boundary in Lake Nyasa (Lake Malawi) and the meandering Songwe River; Malawi contends that the entire lake up to the Tanzanian shoreline is its territory, while Tanzania claims the border is in the center of the lake; the conflict was reignited in 2012 when Malawi awarded a license to a British company for oil exploration in the lake

current situation: Tanzania is a source, transit, and destination country for men, women, and children subjected to forced labor and sex trafficking; the exploitation of young girls in domestic servitude continues to be Tanzania’s largest human trafficking problem; Tanzanian boys are subject to forced labor mainly on farms but also in mines and quarries, in the informal commercial sector, in factories, in the sex trade, and possibly on small fishing boats; Tanzanian children and adults are subjected to domestic servitude, other forms of forced labor, and sex trafficking in other African countries, the Middle East, Europe, and the US; internal trafficking is more prevalent than transnational trafficking and is usually facilitated by friends, family members, or intermediaries with false offers of education or legitimate jobs; trafficking victims from Burundi, Kenya, South Asia, and Yemen are forced to work in Tanzania’s agricultural, mining, and domestic service sectors or may be sex trafficked
tier rating: Tier 2 Watch List – Tanzania does not fully comply with the minimum standards for the elimination of trafficking; however, it is making significant efforts to do so; in 2014, Tanzania was granted a waiver from an otherwise required downgrade to Tier 3 because its government has a written plan that, if implemented, would constitute making significant efforts to bring itself into compliance with the minimum standards for the elimination of trafficking; the government adopted a three-year national action plan and implementing regulations for the 2008 anti-trafficking law; authorities somewhat increased their number of trafficking investigations and prosecutions and convicted one offender, but the penalty was a fine in lieu of prison, which was inadequate given the severity of the crime; the government did not operate any shelters for victims and relied on NGOs to provide protective services (2015)

targeted by traffickers moving hashish, Afghan heroin, and South American cocaine transported down the East African coastline, through airports, or overland through Central Africa; Zanzibar likely used by traffickers for drug smuggling; traffickers in the past have recruited Tanzanian couriers to move drugs through Iran into East Asia