Burkina Faso (formerly Upper Volta) achieved independence from France in 1960. Repeated military coups during the 1970s and 1980s were followed by multiparty elections in the early 1990s. Former President Blaise COMPAORE (1987-2014) resigned in late October 2014 following popular protests against his efforts to amend the constitution's two-term presidential limit. An interim administration organized presidential and legislative elections - held in November 2015 - where Roch Marc Christian KABORE was elected president. The country experienced terrorist attacks in its capital in 2016, 2017, and 2018 and continues to mobilize resources to counter terrorist threats mainly in its northern and eastern regions. It experienced over 100 attacks by violent extremists in the first quarter of 2019. Growing insecurity resulted in nearly 500,000 internally displaced persons and more than 2,000 closed schools. The Government of Burkina Faso has made numerous arrests of terrorist suspects, augmented the size of its special terrorism detachmentGroupement des Forces Anti-Terroristes(GFAT) in the country’s north, and joined the newly-created G5 Sahel Joint Force to fight terrorism and criminal trafficking groups with regional neighbors Chad, Mali, Mauritania, and Niger. In 2017, the Sahara Branch of al-Qa’ida in the Islamic Maghreb, al-Murabitoun, Ansar al-Dine, and the Macina Liberation Front came together to form Jama’at Nusrat al-Islam wal-Muslimin (JNIM). JNIM and other groups like Ansarul Islam and ISIS in the Greater Sahara operate in Burkina Faso. Burkina Faso's high population growth, recurring drought, pervasive and perennial food insecurity, and limited natural resources result in poor economic prospects for the majority of its citizens. (2019)

three climate zones including a hot tropical savanna with a short rainy season in the southern half, a tropical hot semi-arid steppe climate typical of the Sahel region in the northern half, and small area of hot desert in the very north of the country bordering the Sahara Desert

Mostly flat to dissected, undulating plains; hills in the west and southeast.  Occupies an extensive plateau with savanna that is grassy in the north and gradually gives way to sparse forests in the south. (2019)

landlocked savanna cut by the three principal rivers of the Black, Red, and White Voltas

19,742,715 (July 2018 est.)
note: estimates for this country explicitly take into account the effects of excess mortality due to AIDS; this can result in lower life expectancy, higher infant mortality, higher death rates, lower population growth rates, and changes in the distribution of population by age and sex than would otherwise be expected
country comparison to the world: 61

Burkina Faso has a young age structure – the result of declining mortality combined with steady high fertility – and continues to experience rapid population growth, which is putting increasing pressure on the country’s limited arable land. More than 65% of the population is under the age of 25, and the population is growing at 3% annually. Mortality rates, especially those of infants and children, have decreased because of improved health care, hygiene, and sanitation, but women continue to have an average of almost 6 children. Even if fertility were substantially reduced, today’s large cohort entering their reproductive years would sustain high population growth for the foreseeable future. Only about a third of the population is literate and unemployment is widespread, dampening the economic prospects of Burkina Faso’s large working-age population.Migration has traditionally been a way of life for Burkinabe, with seasonal migration being replaced by stints of up to two years abroad. Cote d’Ivoire remains the top destination, although it has experienced periods of internal conflict. Under French colonization, Burkina Faso became a main labor source for agricultural and factory work in Cote d’Ivoire. Burkinabe also migrated to Ghana, Mali, and Senegal for work between the world wars. Burkina Faso attracts migrants from Cote d’Ivoire, Ghana, and Mali, who often share common ethnic backgrounds with the Burkinabe. Despite its food shortages and high poverty rate, Burkina Faso has become a destination for refugees in recent years and hosts about 33,500 Malians as of May 2017. (2018) 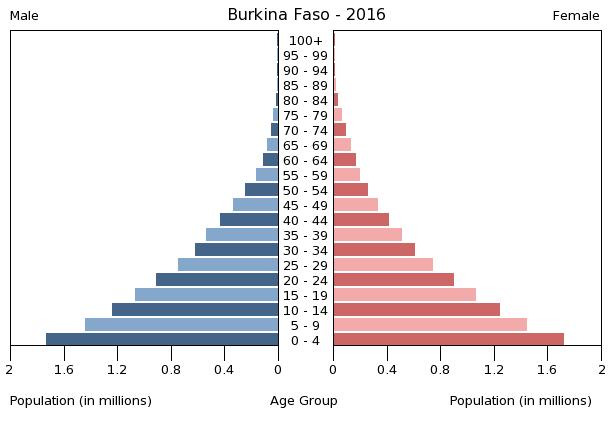 history: several previous; latest approved by referendum 2 June 1991, adopted 11 June 1991, temporarily suspended late October to mid-November 2014; initial draft of a new constitution to usher in the new republic was completed in January 2017 and a final draft was submitted to the government in December 2017; a constitutional referendum originally scheduled for adoption in March 2019 was postponed until 2020
amendments: proposed by the president, by a majority of National Assembly membership, or by petition of at least 30,000 eligible voters submitted to the Assembly; passage requires at least three-fourths majority vote in the Assembly; failure to meet that threshold requires majority voter approval in a referendum; constitutional provisions on the form of government, the multiparty system, and national sovereignty cannot be amended; amended several times, last in 2012 (2019)

civil law based on the French model and customary law; in mid-2019, the National Assembly amended the penal code

citizenship by birth: no
citizenship by descent only: at least one parent must be a citizen of Burkina Faso
dual citizenship recognized: yes
residency requirement for naturalization: 10 years

two equal horizontal bands of red (top) and green with a yellow five-pointed star in the center; red recalls the country's struggle for independence, green is for hope and abundance, and yellow represents the country's mineral wealth
note: uses the popular Pan-African colors of Ethiopia

Burkina Faso is a poor, landlocked country that depends on adequate rainfall. Irregular patterns of rainfall, poor soil, and the lack of adequate communications and other infrastructure contribute to the economy’s vulnerability to external shocks. About 80% of the population is engaged in subsistence farming and cotton is the main cash crop. The country has few natural resources and a weak industrial base.Cotton and gold are Burkina Faso’s key exports - gold has accounted for about three-quarters of the country’s total export revenues. Burkina Faso’s economic growth and revenue depends largely on production levels and global prices for the two commodities. The country has seen an upswing in gold exploration, production, and exports.In 2016, the government adopted a new development strategy, set forth in the 2016-2020 National Plan for Economic and Social Development, that aims to reduce poverty, build human capital, and to satisfy basic needs. A new three-year IMF program (2018-2020), approved in 2018, will allow the government to reduce the budget deficit and preserve critical spending on social services and priority public investments.While the end of the political crisis has allowed Burkina Faso’s economy to resume positive growth, the country’s fragile security situation could put these gains at risk. Political insecurity in neighboring Mali, unreliable energy supplies, and poor transportation links pose long-term challenges.

since the official inauguration of Terrestrial Digital Television (TNT) in December 2017, Burkina Faso now has 14 digital TV channels among which 2 are state-owned; there are more than 140 radio stations (commercial, religious, community) available throughout the country including a national and regional state-owned network; the state-owned Radio Burkina and the private Radio Omega are among the most widespread stations and both include broadcasts in French and local languages (2019)

18 years of age for voluntary military service; no conscription; women may serve in supporting roles (2013)

Ansarul Islam: aim(s): to end government control in parts of the north of the country and enforce sharia in the area of the ancient Fulani Empire of Djeelgodji
area(s) of operation: targets Burkinabe security forces and civilians primarily in the country's northern Sahel Region (along the border with Mali) (2019)
Islamic State of Iraq and ash-sham networks in the Greater Sahara (ISGS): aim(s): replace regional governments with an Islamic state
area(s) of operation: mostly concentrated in the Mali-Burkina Faso-Niger tri-border region; targets primarily security forces
(2019)

al-Mulathamun Battalion: aim(s): replace several African governments, including Burkina Faso's government, with an Islamic state
area(s) of operation: engages in kidnappings for ransom and violent activities across the country, including in the capital Ouagadougou

adding to illicit cross-border activities, Burkina Faso has issues concerning unresolved boundary alignments with its neighbors; demarcation is currently underway with Mali; the dispute with Niger was referred to the ICJ in 2010, and a dispute over several villages with Benin persists; Benin retains a border dispute with Burkina Faso around the town of Koualou

current situation: Burkina Faso is a source, transit, and destination country for women and children subjected to forced labor and sex trafficking; Burkinabe children are forced to work as farm hands, gold panners and washers, street vendors, domestic servants, and beggars or in the commercial sex trade, with some transported to nearby countries; to a lesser extent, Burkinabe women are recruited for legitimate jobs in the Middle East or Europe and subsequently forced into prostitution; women from other West African countries are also lured to Burkina Faso for work and subjected to forced prostitution, forced labor in restaurants, or domestic servitude
tier rating: Tier 2 Watch List – Burkina Faso does not fully comply with the minimum standards for the elimination of trafficking; however, it is making significant efforts to do so; law enforcement efforts decreased in 2014, with a significant decline in trafficking prosecutions (none for forced begging involving Koranic school teachers – a prevalent form of trafficking) and no convictions, a 2014 law criminalizing the sale of children, child prostitution, and child pornography is undermined by a provision allowing offenders to pay a fine in lieu of serving prison time proportionate to the crime; the government sustained efforts to identify and protect a large number of child victims, relying on support from NGOs and international organizations; nationwide awareness-raising activities were sustained, but little was done to stop forced begging (2015)