Uzbekistan is the geographic and population center of Central Asia. The country has a diverse economy and a relatively young population. Russia conquered and united the disparate territories of present-day Uzbekistan in the late 19th century. Stiff resistance to the Red Army after the Bolshevik Revolution was eventually suppressed and a socialist republic established in 1924. During the Soviet era, intensive production of "white gold" (cotton) and grain led to the overuse of agrochemicals and the depletion of water supplies, leaving the land degraded and the Aral Sea and certain rivers half-dry. Independent since the dissolution of the USSR in 1991, the country has diversified agricultural production while developing its mineral and petroleum export capacity and increasing its manufacturing base, although cotton remains a major part of its economy. Uzbekistan’s first president, Islam KARIMOV, led Uzbekistan for 25 years until his death in September 2016. His successor, former Prime Minister Shavkat MIRZIYOYEV, has improved relations with Uzbekistan’s neighbors and introduced wide-ranging economic, judicial, and social reforms.

about four times the size of Virginia; slightly larger than California

0 km(doubly landlocked); note - Uzbekistan includes the southern portion of the Aral Sea with a 420 km shoreline

shrinkage of the Aral Sea has resulted in growing concentrations of chemical pesticides and natural salts; these substances are then blown from the increasingly exposed lake bed and contribute to desertification and respiratory health problems; water pollution from industrial wastes and the heavy use of fertilizers and pesticides is the cause of many human health disorders; increasing soil salination; soil contamination from buried nuclear processing and agricultural chemicals, including DDT

along with Liechtenstein, one of the only two doubly landlocked countries in the world

Uzbek (official) 74.3%, Russian 14.2%, Tajik 4.4%, other 7.1%
note: in the autonomous Karakalpakstan Republic, both the Karakalpak language and Uzbek have official status 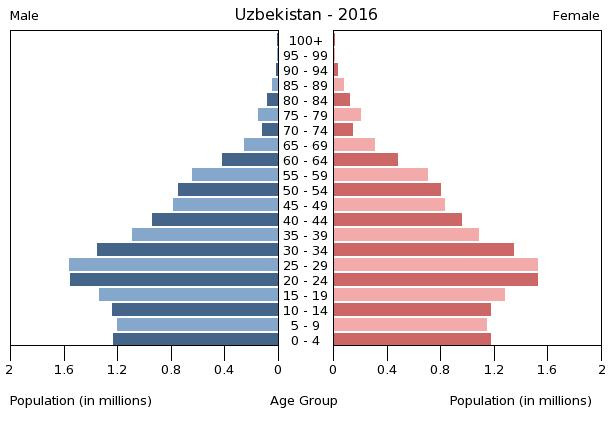 history: several previous; latest adopted 8 December 1992
amendments: proposed by the Supreme Assembly or by referendum; passage requires two-thirds majority vote of both houses of the Assembly or passage in a referendum; amended several times, last in 2017 (2018)

citizenship by birth: no
citizenship by descent only: at least one parent must be a citizen of Uzbekistan
dual citizenship recognized: no
residency requirement for naturalization: 5 years

chief of state: President Shavkat MIRZIYOYEV (interim president from 8 September 2016; formally elected president on 4 December 2016 to succeed longtime President Islom KARIMOV, who died on 2 September 2016)
head of government: Prime Minister Abdulla ARIPOV (since 14 December 2016); First Deputy Prime Minister/Minister of Transport Achilbay RAMATOV (since 15 December 2016)
cabinet: Cabinet of Ministers appointed by the president with most requiring approval of the Senate chamber of the Supreme Assembly (Oliy Majlis)
elections/appointments: president directly elected by absolute majority popular vote in 2 rounds if needed for a 5-year term (eligible for a second term; previously a 5-year term, extended by a 2002 constitutional amendment to 7 years, and reverted to 5 years in 2011); election last held on 4 December 2016 (next to be held in 2021); prime minister nominated by majority party in legislature since 2011, but appointed along with the ministers and deputy ministers by the president
election results: Shavkat MIRZIYOYEV elected president in first round; percent of vote - Shavkat MIRZIYOYEV (LDPU) 88.6%, Hotamjon KETMONOV (NDP) 3.7%, Narimon UMAROV (Adolat) 3.5%, Sarvar OTAMURODOV (Milliy Tiklanish/National Revival) 2.4%, other 1.8%

highest courts: Supreme Court (consists of 67 judges organized into administrative, civil, criminal, and economic sections); Constitutional Court (consists of 7 judges)
judge selection and term of office: judges of the highest courts nominated by the president and confirmed by the Senate of the Oliy Majlis; judges appointed for initial 5-year term and can be reappointed for subsequent 10-year and lifetime terms
subordinate courts: regional, district, city, and town courts

three equal horizontal bands of blue (top), white, and green separated by red fimbriations with a vertical, white crescent moon (closed side to the hoist) and 12 white, five-pointed stars shifted to the hoist on the top band; blue is the color of the Turkic peoples and of the sky, white signifies peace and the striving for purity in thoughts and deeds, while green represents nature and is the color of Islam; the red stripes are the vital force of all living organisms that links good and pure ideas with the eternal sky and with deeds on earth; the crescent represents Islam and the 12 stars the months and constellations of the Uzbek calendar

name: "O'zbekiston Respublikasining Davlat Madhiyasi" (National Anthem of the Republic of Uzbekistan)
lyrics/music: Abdulla ARIPOV/Mutal BURHANOV
note: adopted 1992; after the fall of the Soviet Union, Uzbekistan kept the music of the anthem from its time as a Soviet Republic but adopted new lyrics

Uzbekistan is a doubly landlocked country in which 51% of the population lives in urban settlements; the agriculture-rich Fergana Valley, in which Uzbekistan’s eastern borders are situated, has been counted among the most densely populated parts of Central Asia. Since its independence in September 1991, the government has largely maintained its Soviet-style command economy with subsidies and tight controls on production, prices, and access to foreign currency. Despite ongoing efforts to diversify crops, Uzbek agriculture remains largely centered on cotton; Uzbekistan is the world's fifth-largest cotton exporter and seventh-largest producer. Uzbekistan's growth has been driven primarily by state-led investments, and export of natural gas, gold, and cotton provides a significant share of foreign exchange earnings.Recently, lower global commodity prices and economic slowdowns in neighboring Russia and China have hurt Uzbekistan's trade and investment and worsened its foreign currency shortage. Aware of the need to improve the investment climate, the government is taking incremental steps to reform the business sector and address impediments to foreign investment in the country. Since the death of first President Islam KARIMOV and election of President Shavkat MIRZIYOYEV, emphasis on such initiatives and government efforts to improve the private sector have increased. In the past, Uzbek authorities accused US and other foreign companies operating in Uzbekistan of violating Uzbek laws and have frozen and seized their assets.As a part of its economic reform efforts, the Uzbek Government is looking to expand opportunities for small and medium enterprises and prioritizes increasing foreign direct investment. In September 2017, the government devalued the official currency rate by almost 50% and announced the loosening of currency restrictions to eliminate the currency black market, increase access to hard currency, and boost investment.

general assessment: digital exchanges in large cities and in rural areas; increased investment in infrastructure and growing subscriber base; fixed-line is underdeveloped due to preeminence of mobile market; growth in broadband penetration in the future; Wi-Fi hotspot in the city of Tashkent in the future (2018)
domestic: fixed-line 12 per 100 person and mobile-cellular 82 per 100; the state-owned telecommunications company, Uzbek Telecom, owner of the fixed-line telecommunications system, has used loans from the Japanese government and the China Development Bank to upgrade fixed-line services including conversion to digital exchanges; mobile-cellular services are provided by 2 private and 3 state-owned operators with a total subscriber base of 22.8 million as of January 2018 (2018)
international: country code - 998; linked by fiber-optic cable or microwave radio relay with CIS member states and to other countries by leased connection via the Moscow international gateway switch; the country also has a link to the Trans-Asia-Europe (TAE) fiber-optic cable; Uzbekistan has supported the national fiber- optic backbone project of Afghanistan since 2008

the government controls media; 17 state-owned broadcasters - 13 TV and 4 radio - provide service to virtually the entire country; about 20 privately owned TV stations, overseen by local officials, broadcast to local markets; privately owned TV stations are required to lease transmitters from the government-owned Republic TV and Radio Industry Corporation; in 2019, the Uzbek Agency for Press and Information was reorganized into the Agency of Information and Mass Communications and became part of the Uzbek Presidential Administration with recent appointment of the Uzbek President's elder daughter as it deputy director (2019)

18-27 years of age for compulsory military service; 1-year conscript service obligation for males (conscripts have the option of paying for a shorter service of one month while remaining in the reserves until the age of 27); Uzbek citizens who have completed their service terms in the armed forces have privileges in employment and admission to higher educational institutions (2016)

prolonged drought and cotton monoculture in Uzbekistan and Turkmenistan created water-sharing difficulties for Amu Darya river states; field demarcation of the boundaries with Kazakhstan commenced in 2004; border delimitation of 130 km of border with Kyrgyzstan is hampered by serious disputes around enclaves and other areas

current situation: Uzbekistan is a source country for men, women, and children subjected to forced labor and women and children subjected to sex trafficking; government-compelled forced labor of adults remained endemic during the 2014 cotton harvest; despite a decree banning the use of persons under 18, children were mobilized to harvest cotton by local officials in some districts; in some regions, local officials forced teachers, students, private business employees, and others to work in construction, agriculture, and cleaning parks; Uzbekistani women and children are victims of sex trafficking domestically and in the Middle East, Eurasia, and Asia; Uzbekistani men and, to a lesser extent, women are subjected to forced labor in Kazakhstan, Russia, and Ukraine in the construction, oil, agriculture, retail, and food sectors
tier rating: Tier 2 Watch List – Uzbekistan does not fully comply with the minimum standards for the elimination of trafficking; however, it is making significant efforts to do so; law enforcement efforts in 2014 were mixed; the government made efforts to combat sex and transnational labor trafficking, but government-compelled forced labor of adults in the cotton harvest went unaddressed, and the decree prohibiting forced child labor was not applied universally; official complicity in human trafficking in the cotton harvest remained prevalent; authorities made efforts to identify and protect sex and transnational labor victims, although a systematic process is still lacking; minimal efforts were made to assist victims of forced labor in the cotton harvest, as the government does not openly acknowledge the existence of this forced labor; the ILO did not have permission or funding to monitor the 2014 harvest, but the government authorized the UN's International Labour Organization to conduct a survey on recruitment practices and working conditions in agriculture, particularly the cotton sector, and to monitor the 2015-17 cotton harvests for child and forced labor in project areas (2015)