First inhabited by Arawak and later by Carib Indians, the Virgin Islands were settled by the Dutch in 1648 and then annexed by the English in 1672. The islands were part of the British colony of the Leeward Islands from 1872-1960; they were granted autonomy in 1967. The economy is closely tied to the larger and more populous US Virgin Islands to the west; the US dollar is the legal currency. On 6 September 2017, Hurricane Irma devastated the island of Tortola. An estimated 80% of residential and business structures were destroyed or damaged, communications disrupted, and local roads rendered impassable.

Caribbean, between the Caribbean Sea and the North Atlantic Ocean, east of Puerto Rico

limited natural freshwater resources except for a few seasonal streams and springs on Tortola; most of the islands' water supply comes from desalination plants; sewage and mining/industry waste contribute to water pollution, threatening coral reefs

strong ties to nearby US Virgin Islands and Puerto Rico 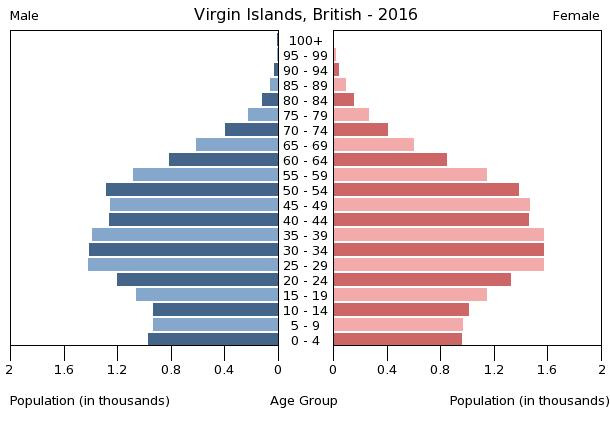 name: Road Town
geographic coordinates: 18 25 N, 64 37 W
time difference: UTC-4 (1 hour ahead of Washington, DC, during Standard Time)
etymology: name refers to the nautical term "roadstead" or "roads," a body of water less sheltered than a harbor but where where ships can lie reasonably safely at anchor sheltered from rip currents, spring tides, or ocean swells

chief of state: Queen ELIZABETH II (since 6 February 1952); represented by Governor Gus JASPERT (since 22 August 2017)
head of government: Premier Andrew FAHIE (since 26 February 2019)
cabinet: Executive Council appointed by the governor from members of the House of Assembly
elections/appointments: the monarchy is hereditary; governor appointed by the monarch; following legislative elections, the leader of the majority party or majority coalition usually appointed premier by the governor

highest courts: the Eastern Caribbean Supreme Court (ECSC) is the superior court of the Organization of Eastern Caribbean States; the ECSC - headquartered on St. Lucia - consists of the Court of Appeal - headed by the chief justice and 4 judges - and the High Court with 18 judges; the Court of Appeal is itinerant, traveling to member states on a schedule to hear appeals from the High Court and subordinate courts; High Court judges reside in the member states, with 3 in the British Virgin Islands
judge selection and term of office: Eastern Caribbean Supreme Court chief justice appointed by Her Majesty, Queen ELIZABETH II; other justices and judges appointed by the Judicial and Legal Services Commission; Court of Appeal justices appointed for life with mandatory retirement at age 65; High Court judges appointed for life with mandatory retirement at age 62
subordinate courts: Magistrates' Courts

blue with the flag of the UK in the upper hoist-side quadrant and the Virgin Islander coat of arms centered in the outer half of the flag; the coat of arms depicts a woman flanked on either side by a vertical column of six oil lamps above a scroll bearing the Latin word VIGILATE (Be Watchful); the islands were named by COLUMBUS in 1493 in honor of Saint Ursula and her 11 virgin followers (some sources say 11,000) who reputedly were martyred by the Huns in the 4th or 5th century; the figure on the banner holding a lamp represents the saint; the other lamps symbolize her followers

The economy, one of the most stable and prosperous in the Caribbean, is highly dependent on tourism, which generates an estimated 45% of the national income. More than 934,000 tourists, mainly from the US, visited the islands in 2008. Because of traditionally close links with the US Virgin Islands, the British Virgin Islands has used the US dollar as its currency since 1959.Livestock raising is the most important agricultural activity; poor soils limit the islands' ability to meet domestic food requirements.In the mid-1980s, the government began offering offshore registration to companies wishing to incorporate in the islands, and incorporation fees now generate substantial revenues. Roughly 400,000 companies were on the offshore registry by yearend 2000. The adoption of a comprehensive insurance law in late 1994, which provides a blanket of confidentiality with regulated statutory gateways for investigation of criminal offenses, made the British Virgin Islands even more attractive to international business.

transshipment point for South American narcotics destined for the US and Europe; large offshore financial center makes it vulnerable to money laundering