The conquest of Vietnam by France began in 1858 and was completed by 1884. It became part of French Indochina in 1887. Vietnam declared independence after World War II, but France continued to rule until its 1954 defeat by communist forces under Ho Chi MINH. Under the Geneva Accords of 1954, Vietnam was divided into the communist North and anti-communist South. US economic and military aid to South Vietnam grew through the 1960s in an attempt to bolster the government, but US armed forces were withdrawn following a cease-fire agreement in 1973. Two years later, North Vietnamese forces overran the South reuniting the country under communist rule. Despite the return of peace, for over a decade the country experienced little economic growth because of conservative leadership policies, the persecution and mass exodus of individuals - many of them successful South Vietnamese merchants - and growing international isolation. However, since the enactment of Vietnam's "doi moi" (renovation) policy in 1986, Vietnamese authorities have committed to increased economic liberalization and enacted structural reforms needed to modernize the economy and to produce more competitive, export-driven industries. The communist leaders maintain tight control on political expression but have demonstrated some modest steps toward better protection of human rights. The country continues to experience small-scale protests, the vast majority connected to either land-use issues, calls for increased political space, or the lack of equitable mechanisms for resolving disputes. The small-scale protests in the urban areas are often organized by human rights activists, but many occur in rural areas and involve various ethnic minorities such as the Montagnards of the Central Highlands, Hmong in the Northwest Highlands, and the Khmer Krom in the southern delta region.

Southeastern Asia, bordering the Gulf of Thailand, Gulf of Tonkin, and South China Sea, as well as China, Laos, and Cambodia

about three times the size of Tennessee; slightly larger than New Mexico

tropical in south; monsoonal in north with hot, rainy season (May to September) and warm, dry season (October to March)

occasional typhoons (May to January) with extensive flooding, especially in the Mekong River delta

note 1: extending 1,650 km north to south, the country is only 50 km across at its narrowest point

note 2: Son Doong in Phong Nha-Ke Bang National Park is the world's largest cave (greatest cross sectional area) and is the largest known cave passage in the world by volume; it currently measures a total of 38.5 million cu m (about 1.35 billion cu ft); it connects to Thung cave (but not yet officially); when recognized, it will add an additional 1.6 million cu m in volume; Son Doong is so massive that it contains its own jungle, underground river, and localized weather system; clouds form inside the cave and spew out from its exits and two dolines (openings (sinkhole skylights) created by collapsed ceilings that allow sunlight to stream in) 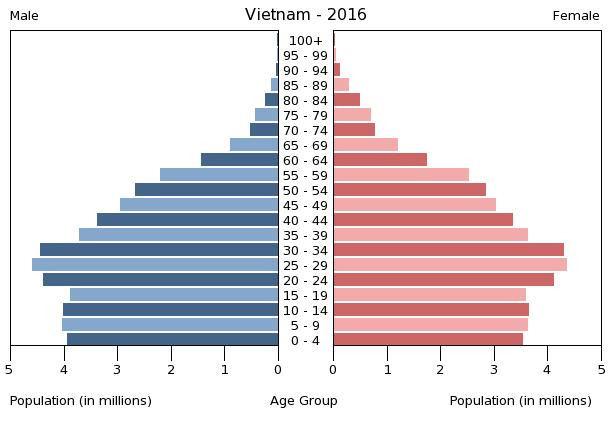 citizenship by birth: no
citizenship by descent only: at least one parent must be a citizen of Vietnam
dual citizenship recognized: no
residency requirement for naturalization: 5 years

red field with a large yellow five-pointed star in the center; red symbolizes revolution and blood, the five-pointed star represents the five elements of the populace - peasants, workers, intellectuals, traders, and soldiers - that unite to build socialism

name: "Tien quan ca" (The Song of the Marching Troops)
lyrics/music: Nguyen Van CAO
note: adopted as the national anthem of the Democratic Republic of Vietnam in 1945; it became the national anthem of the unified Socialist Republic of Vietnam in 1976; although it consists of two verses, only the first is used as the official anthem

Vietnam is a densely populated developing country that has been transitioning since 1986 from the rigidities of a centrally planned, highly agrarian economy to a more industrial and market based economy, and it has raised incomes substantially. Vietnam exceeded its 2017 GDP growth target of 6.7% with growth of 6.8%, primarily due to unexpected increases in domestic demand, and strong manufacturing exports.Vietnam has a young population, stable political system, commitment to sustainable growth, relatively low inflation, stable currency, strong FDI inflows, and strong manufacturing sector. In addition, the country is committed to continuing its global economic integration. Vietnam joined the WTO in January 2007 and concluded several free trade agreements in 2015-16, including the EU-Vietnam Free Trade Agreement (which the EU has not yet ratified), the Korean Free Trade Agreement, and the Eurasian Economic Union Free Trade Agreement. In 2017, Vietnam successfully chaired the Asia-Pacific Economic Cooperation (APEC) Conference with its key priorities including inclusive growth, innovation, strengthening small and medium enterprises, food security, and climate change. Seeking to diversify its opportunities, Vietnam also signed the Comprehensive and Progressive Agreement for the Transpacific Partnership in 2018 and continued to pursue the Regional Comprehensive Economic Partnership.To continue its trajectory of strong economic growth, the government acknowledges the need to spark a ‘second wave’ of reforms, including reforming state-owned-enterprises, reducing red tape, increasing business sector transparency, reducing the level of non-performing loans in the banking sector, and increasing financial sector transparency. Vietnam’s public debt to GDP ratio is nearing the government mandated ceiling of 65%.In 2016, Vietnam cancelled its civilian nuclear energy development program, citing public concerns about safety and the high cost of the program; it faces growing pressure on energy infrastructure. Overall, the country’s infrastructure fails to meet the needs of an expanding middle class. Vietnam has demonstrated a commitment to sustainable growth over the last several years, but despite the recent speed-up in economic growth the government remains cautious about the risk of external shocks.

58.5% of GDP (2017 est.)
59.9% of GDP (2016 est.)
note: official data; data cover general government debt and include debt instruments issued (or owned) by government entities other than the treasury; the data include treasury debt held by foreign entities; the data include debt issued by subnational entities, as well as intragovernmental debt; intragovernmental debt consists of treasury borrowings from surpluses in the social funds, such as for retirement, medical care, and unemployment; debt instruments for the social funds are not sold at public auctions
country comparison to the world: 76

government controls all broadcast media exercising oversight through the Ministry of Information and Communication (MIC); government-controlled national TV provider, Vietnam Television (VTV), operates a network of several channels with regional broadcasting centers; programming is relayed nationwide via a network of provincial and municipal TV stations; law limits access to satellite TV but many households are able to access foreign programming via home satellite equipment; government-controlled Voice of Vietnam, the national radio broadcaster, broadcasts on several channels and is repeated on AM, FM, and shortwave stations throughout Vietnam (2018)

18-27 years of age for compulsory and voluntary military service (females eligible for conscription, but in practice only males are drafted); conscription typically takes place twice annually and service obligation is 2 years (Army, Air Defense) and 3 years (Navy and Air Force) (2019)

the International Maritime Bureau reports the territorial and offshore waters in the South China Sea as high risk for piracy and armed robbery against ships; numerous commercial vessels have been attacked and hijacked both at anchor and while underway; hijacked vessels are often disguised and cargo diverted to ports in East Asia; crews have been murdered or cast adrift; the number of reported incidents increased from two in 2017 to four in 2018, primarily near the port of Vung Tau

southeast Asian states have enhanced border surveillance to check the spread of Asian swine fever; Cambodia and Laos protest Vietnamese squatters and armed encroachments along border; Cambodia accuses Vietnam of a wide variety of illicit cross-border activities; progress on a joint development area with Cambodia is hampered by an unresolved dispute over sovereignty of offshore islands; an estimated 300,000 Vietnamese refugees reside in China; establishment of a maritime boundary with Cambodia is hampered by unresolved dispute over the sovereignty of offshore islands; the decade-long demarcation of the China-Vietnam land boundary was completed in 2009; China occupies the Paracel Islands also claimed by Vietnam and Taiwan; Brunei claims a maritime boundary extending beyond as far as a median with Vietnam, thus asserting an implicit claim to Lousia Reef; the 2002 "Declaration on the Conduct of Parties in the South China Sea" eased tensions but differences between the parties negotiating the Code of Conduct continue; Vietnam continues to expand construction of facilities in the Spratly Islands; in March 2005, the national oil companies of China, the Philippines, and Vietnam signed a joint accord to conduct marine seismic activities in the Spratly Islands; Economic Exclusion Zone negotiations with Indonesia are ongoing, and the two countries in Fall 2011 agreed to work together to reduce illegal fishing along their maritime boundary; in May 2018, Russia’s RosneftVietnam unit started drilling at a block southeast of Vietnam which is within the area outlined by China’s nine-dash line and Beijing issued a warning

stateless persons: 34,110 (2018); note - Vietnam's stateless ethnic Chinese Cambodian population dates to the 1970s when thousands of Cambodians fled to Vietnam to escape the Khmer Rouge and were no longer recognized as Cambodian citizens; Vietnamese women who gave up their citizenship to marry foreign men have found themselves stateless after divorcing and returning home to Vietnam; the government addressed this problem in 2009, and Vietnamese women are beginning to reclaim their citizenship