Dengue, an acute febrile illness, is caused by infection with any of 4 related positive-sense, single-stranded RNA viruses of the genus Flavivirus , dengue viruses 1, 2, 3, or 4.

Almost all transmission occurs through the bite of infected Aedes mosquitoes, primarily Aedes aegypti and Ae. albopictus . Because of the approximately 7-day viremia in humans, bloodborne transmission is possible through exposure to infected blood, organs, or other tissues (such as bone marrow). In addition, perinatal dengue transmission occurs when the mother is infected near the time of birth, in which infection occurs via microtransfusions when the placenta is detached or through mucosal contact with mother’s blood during birth. Congenital transmission has not been documented. Dengue viruses may also be transmitted through breast milk. There is no evidence of sexual transmission.

Dengue is endemic throughout the tropics and subtropics and is a leading cause of febrile illness among travelers returning from Latin America, the Caribbean, and Southeast Asia. Dengue occurs in >100 countries worldwide (Maps 4-1 through 4-3), including Puerto Rico, the US Virgin Islands, and US-affiliated Pacific Islands. Sporadic outbreaks with local transmission have occurred in Florida, Hawaii, and Texas along the border with Mexico. Although the geographic distribution of dengue is similar to that of malaria, dengue is more of a risk in urban and residential areas than is malaria. DengueMap (www.healthmap.org/dengue/index.php) shows up-to-date information on areas of ongoing transmission.

Map 4-1. Dengue risk in the Americas and the Caribbean 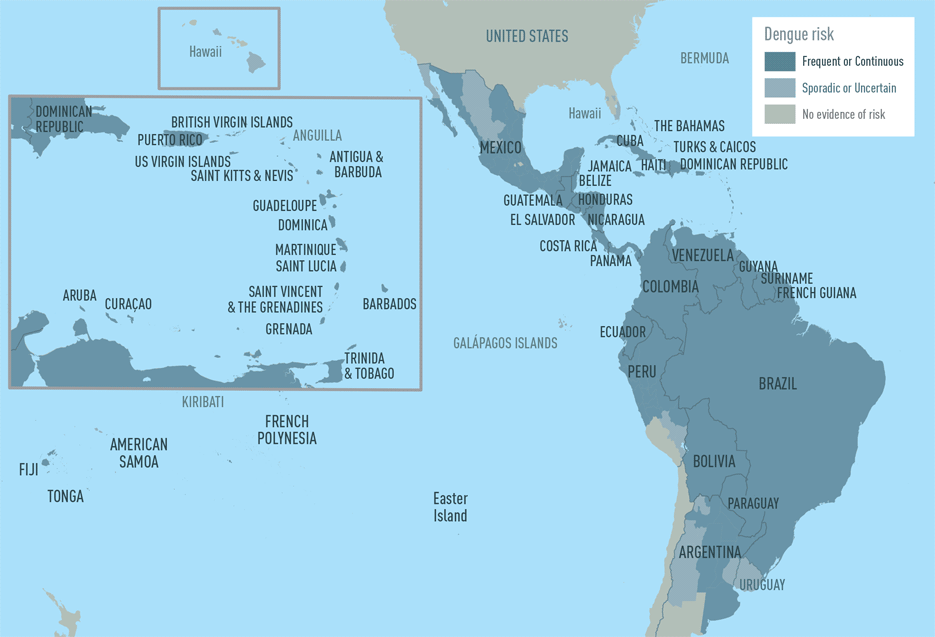 Risk areas are shown on a national level except for where evidence exists of different risk levels at subnational regions. Areas that are too small to be seen on the regional maps are labeled in dark blue or light blue depending on their risk categorization.
Map 4-2. Dengue risk in Africa, Europe, and the Middle East 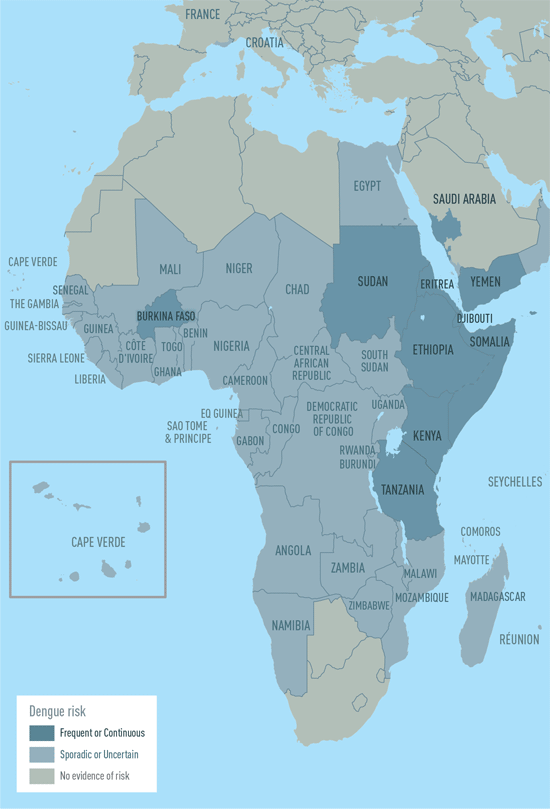 Risk areas are shown on a national level except for where evidence exists of different risk levels at subnational regions. Areas that are too small to be seen on the regional maps are labeled in dark blue or light blue depending on their risk categorization.
Map 4-3. Dengue risk in Asia and Oceania 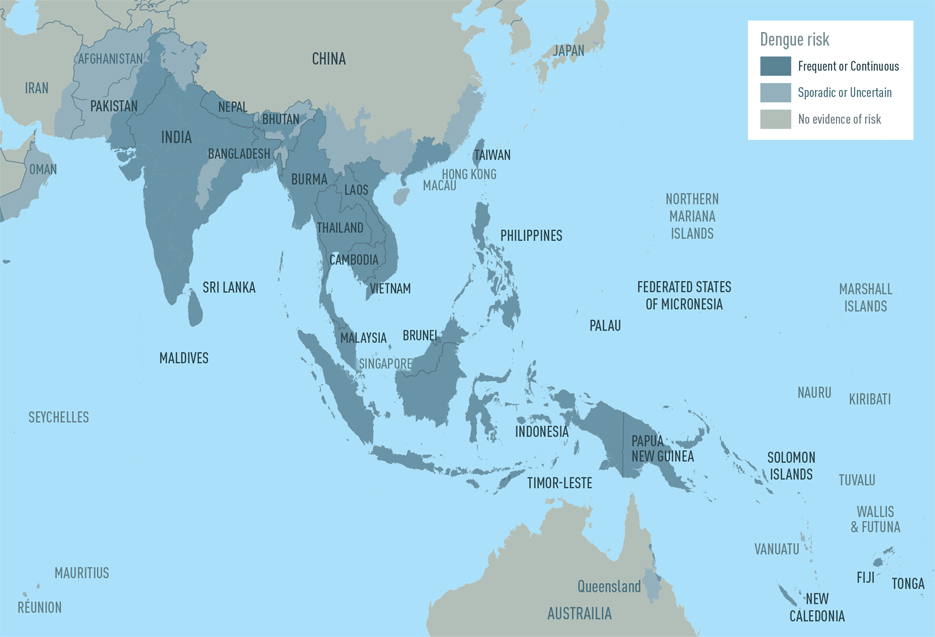 An estimated 40%–80% of infections are asymptomatic. Symptomatic infection (dengue) most commonly presents as a mild to moderate, nonspecific, acute febrile illness. However, as many as 5% of all dengue patients develop severe, life-threatening disease. Early clinical findings are nonspecific but require a high index of suspicion, because recognizing early signs of shock and promptly initiating intensive supportive therapy can reduce risk of death among patients with severe dengue by at least 20-fold to <0.5%. See Box 4-2 for information regarding the World Health Organization guidelines for classifying dengue.

Dengue begins abruptly after an incubation period of 5–7 days (range, 3–10 days), and the course follows 3 phases: febrile, critical, and convalescent. Fever typically lasts 2–7 days and can be biphasic. Other signs and symptoms may include severe headache; retroorbital pain; muscle, joint, and bone pain; macular or maculopapular rash; and minor hemorrhagic manifestations, including petechiae, ecchymosis, purpura, epistaxis, bleeding gums, hematuria, or a positive tourniquet test result. Some patients have an injected oropharynx and facial erythema in the first 24–48 hours after onset. Warning signs of progression to severe dengue occur in the late febrile phase around the time of defervescence and include persistent vomiting, severe abdominal pain, fluid accumulation, mucosal bleeding, difficulty breathing, lethargy/restlessness, postural hypotension, liver enlargement, and progressive increase in hematocrit (hemoconcentration).

The critical phase of dengue begins at defervescence and typically lasts 24–48 hours. Most patients clinically improve during this phase, but those with substantial plasma leakage develop severe dengue as a result of a marked increase in vascular permeability. Initially, physiologic compensatory mechanisms maintain adequate circulation, which narrows pulse pressure as diastolic blood pressure increases. Patients with severe plasma leakage have pleural effusions or ascites, hypoproteinemia, and hemoconcentration. Patients may appear well despite early signs of shock. However, once hypotension develops, systolic blood pressure rapidly declines, and irreversible shock and death may ensue despite resuscitation efforts. Patients can also develop severe hemorrhagic manifestations, including hematemesis, bloody stool, melena, or menorrhagia, especially if they have prolonged shock. Uncommon manifestations include hepatitis, myocarditis, pancreatitis, and encephalitis.

As plasma leakage subsides, the patient enters the convalescent phase and begins to reabsorb extravasated intravenous fluids and pleural and abdominal effusions. As a patient’s well-being improves, hemodynamic status stabilizes (although he or she may manifest bradycardia), and diuresis ensues. The patient’s hematocrit stabilizes or may fall because of the dilutional effect of the reabsorbed fluid, and the white cell count usually starts to rise, followed by a recovery of the platelet count. The convalescent-phase rash may desquamate and be pruritic.

Data are limited on health outcomes of dengue in pregnancy and effects of maternal infection on the developing fetus. Perinatal transmission can occur, and peripartum maternal infection may increase the likelihood of symptomatic infection in the newborn. Of 41 perinatal transmission cases described in the literature, all developed thrombocytopenia, most had evidence of plasma leakage evidenced by ascites or pleural effusions, and fever was absent in only 2. Nearly 40% had a hemorrhagic manifestation, and one-fourth had hypotension. Symptoms in perinatally infected neonates typically present during the first week of life. Placental transfer of maternal IgG against dengue virus (from a previous maternal infection) may increase risk for severe dengue among infants infected at 6–12 months of age when the protective effect of these antibodies wanes.

In November 2009, the World Health Organization (WHO) issued a new guideline that classifies symptomatic cases as dengue or severe dengue.

Dengue is defined by a combination of ≥2 clinical findings in a febrile person who traveled to or lives in a dengue-endemic area. Clinical findings include nausea, vomiting, rash, aches and pains, a positive tourniquet test, leukopenia, and the following warning signs: abdominal pain or tenderness, persistent vomiting, clinical fluid accumulation, mucosal bleeding, lethargy, restlessness, liver enlargement, and postural hypotension. The presence of a warning sign may predict severe dengue in a patient.

Severe dengue is defined by dengue with any of the following symptoms: severe plasma leakage leading to shock or fluid accumulation with respiratory distress; severe bleeding; or severe organ impairment such as elevated transaminases ≥1,000 IU/L, impaired consciousness, or heart impairment.

From 1975 through 2009, symptomatic dengue virus infections were classified according to the WHO guidelines as dengue fever, dengue hemorrhagic fever (DHF), and dengue shock syndrome (the most severe form of DHF). The case definition was changed to the 2009 clinical classification after reports that the case definition of DHF was both too difficult to apply in resource-limited settings and too specific, as it failed to identify a substantial proportion of severe dengue cases, including cases of hepatic failure and encephalitis. The 2009 clinical classification has been criticized for being overly inclusive, as it allows several different ways to qualify for severe dengue, and nonspecific warning signs are used as diagnostic criteria for dengue.

Clinicians should consider dengue in a patient who was in an endemic area within 2 weeks of symptom onset. Because dengue is a nationally notifiable disease, all suspected cases should be reported to the state or local health department. Laboratory confirmation can be made from a single acute-phase serum specimen obtained early (≤7 days after fever onset) in the illness by detecting viral genomic sequences with RT-PCR or dengue nonstructural protein 1 (NS1) antigen by immunoassay. Later in the illness (≥4 days after fever onset), IgM against dengue virus can be detected with ELISA. For patients presenting during the first week after fever onset, diagnostic testing should include a test for dengue virus (RT-PCR or NS1) and IgM (Figure 4-1). For patients presenting >1 week after fever onset, an IgM test is most useful. In the United States, both IgM ELISA and real-time RT-PCR are approved as in vitro diagnostic tests. 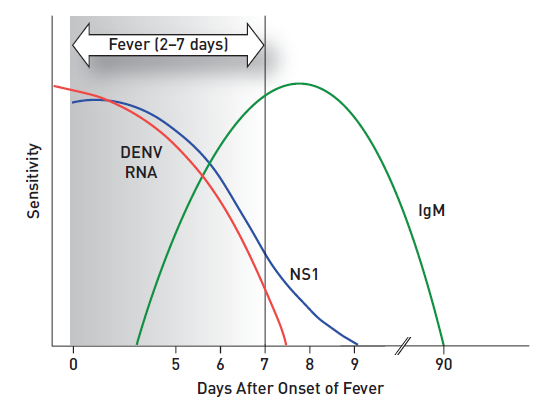 Presence of virus by RT-PCR or NS1 antigen in a single diagnostic specimen is considered laboratory confirmation of dengue in patients with a compatible clinical and travel history. IgM in a single serum sample suggests a probable recent dengue infection and should be considered diagnostic for dengue if the infection most likely occurred in a place where other potentially cross-reactive flaviviruses (such as Zika, West Nile, yellow fever, and Japanese encephalitis viruses) are not a risk. If infection is likely to have occurred in a place where other potentially cross-reactive flaviviruses circulate, both molecular and serologic diagnostic testing should be performed to detect evidence of infection with dengue and the other flaviviruses.

IgG by ELISA in a single serum sample is not useful for routine diagnostic testing because it remains detectable for life after infection. In addition, people infected with or vaccinated against other flaviviruses (such as yellow fever or Japanese encephalitis) may produce cross-reactive flavivirus antibodies, yielding false-positive serologic dengue diagnostic test results.

No specific antiviral agents exist for dengue. Patients should be advised to stay well hydrated and to avoid aspirin (acetylsalicylic acid), aspirin-containing drugs, and other nonsteroidal anti- inflammatory drugs (such as ibuprofen) because of their anticoagulant properties. Fever should be controlled with acetaminophen and tepid sponge baths. Febrile patients should avoid mosquito bites to reduce risk of further transmission. For those who develop severe dengue, close observation and frequent monitoring in an intensive care unit setting may be required. Prophylactic platelet transfusions in dengue patients are not beneficial and may contribute to fluid overload. Similarly, administration of corticosteroids has no demonstrated benefit and is potentially harmful to patients; corticosteroids should not be used except in the case of autoimmune-related complications.

A vaccine to prevent dengue (Dengvaxia) has been licensed in almost 20 countries and approved for commercial use in 11 countries. However, in late 2017, the vaccine manufacturer, Sanofi Pasteur, announced that people who receive the vaccine and have not been previously infected with a dengue virus may be at risk of developing more severe manifestations of dengue. The Philippines suspended its dengue vaccine program, and other countries have specified that only people who have been infected with a dengue virus should receive the vaccine. Two other dengue vaccines are currently in phase 3 clinical trials, for which completion is expected in 2018 and 2019.

No prophylaxis is available to prevent dengue. Risk increases with duration of travel and disease incidence in the travel destination (such as during the rainy season and during epidemics). Travelers going to the tropics for any length of time should avoid mosquito bites by taking the following preventive measures: