Neisseria meningitidis is a gram-negative diplococcus. Meningococci are classified into serogroups on the basis of the composition of the capsular polysaccharide. The 6 major meningococcal serogroups associated with disease are A, B, C, W, X, and Y.

Spread through respiratory secretions; requires close contact. Both asymptomatic carriers and people with overt meningococcal disease can serve as sources of infection. Asymptomatic carriage is transient and typically affects approximately 5%–10% of the population at any given time.

N. meningitidis is found worldwide, but the highest incidence occurs in the “meningitis belt” of sub-Saharan Africa (Map 4-10). Meningococcal disease is hyperendemic to this region, and periodic epidemics during the dry season (December–June) reach up to 1,000 cases per 100,000 population. By contrast, rates of disease in the United States, Europe, Australia, and South America range from 0.12 to 3 cases per 100,000 population per year. 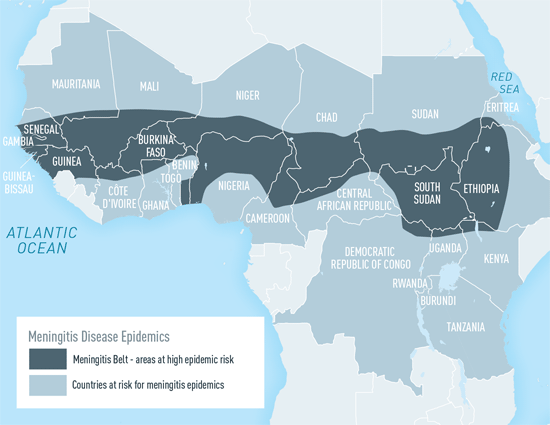 Outside the meningitis belt, infants and adolescents have the highest rates of disease. In meningitis belt countries, high rates of disease are seen in people up to age 30 years, and the highest rates are in children and adolescents aged 5– 14 years. Risk for travelers is highest in people visiting meningitis belt countries who have prolonged contact with local populations during an epidemic. The Hajj pilgrimage to Saudi Arabia has also been associated with outbreaks of meningococcal disease in returning pilgrims and their contacts.

The signs and symptoms of meningococcal meningitis are similar to those of other causes of bacterial meningitis, such as Haemophilus influenzae and Streptococcus pneumoniae . The causative organism should be identified so that the correct antibiotics can be used for treatment and prophylaxis. Meningococcal disease is nationally notifiable in the United States and should be immediately reported to the state or local health department.

Meningococcal disease can be rapidly fatal and should always be viewed as a medical emergency. Antibiotic treatment must be started early in the course of the disease, and empirically when suspected and prior to the diagnostic test results. Several antibiotic choices are available, including third-generation cephalosporins.

The Advisory Committee on Immunization Practices (ACIP) recommends routine administration of a quadrivalent meningococcal conjugate vaccine (MenACWY) for all people aged 11–18 years. A single dose of vaccine should be administered at age 11 or 12 years, and a booster dose should be administered at age 16 years. Routine immunization with MenACWY is not recommended for other age groups in the United States, with the exception of people at increased risk for meningococcal disease. Those at increased risk for meningococcal disease include people who have a persistent complement component deficiency (C3, C5-9, properdin, factor D, factor H, or people who are taking eculizumab [Soliris]), people who have functional or anatomic asplenia, or people with HIV. Vaccine, product, number of doses, and booster dose recommendations are based on age and risk factors and are described in detail for each risk group in the 2013 ACIP Meningococcal Disease Recommendations (www.cdc.gov/mmwr/preview/mmwrhtml/rr6202a1.htm) and additional ACIP policy notes (www.cdc.gov/vaccines/hcp/acip-recs/vacc-specific/mening.html).

Adolescents and young adults aged 16–23 years may also be vaccinated with a serogroup B meningococcal (MenB) vaccine series to provide short-term protection against most strains of serogroup B meningococcal disease. The preferred age for MenB vaccination is 16–18 years. ACIP also recommends routine use of MenB vaccine for people aged ≥10 years who are at increased risk for meningococcal disease, including people who have persistent complement component deficiency and people who have functional or anatomic asplenia. ACIP recommendations for MenB vaccines can be found at www.cdc.gov/vaccines/hcp/acip-recs/vacc-specific/mening.html.

ACIP recommends that travelers aged ≥2 months who visit or reside in parts of sub-Saharan Africa known as the “meningitis belt” (see Map 4-10) during the dry season (December–June) receive vaccination with a MenACWY vaccine before travel. Advisories for travelers to other countries are issued when outbreaks of meningococcal disease are recognized (see the CDC Travelers’ Health website at www.cdc.gov/travel).

For travelers initiating vaccination at ≥9 months (i.e., 9 months through 55 years), either MenACWY-CRM or MenACWY-D (Menactra) may be used. For travelers 9–23 months of age who receive MenACWY-D, 2 doses should be administered, with the second dose administered ≥3 months after the first dose, although it can be administered as early as 8 weeks after the first dose to precede travel. For most people aged ≥2 years, 1 dose of a MenACWY vaccine (MenACWY-CRM or MenACWY-D) is recommended before travel.

Additional dosing instructions for people with HIV, asplenia, or persistent complement component deficiencies are available in the 2013 ACIP Meningococcal Disease Recommendations (www.cdc.gov/mmwr/preview/mmwrhtml/rr6202a1.htm). Although not licensed for use in adults aged ≥56 years, MenACWY is the recommended vaccine for people in this age group, as the quadrivalent meningococcal polysaccharide vaccine (MPSV4) is no longer available in the United States.

Travelers to the Kingdom of Saudi Arabia (KSA) for Umrah or Hajj are required to provide documentation of quadrivalent vaccine at least 10 days and no more than 3 years before arrival for polysaccharide vaccine and no more than 5 years before arrival for conjugate vaccine (see www.moh.gov.sa/en/Hajj/Pages/HealthRegulations.aspx). Visa requirements should be confirmed with the KSA embassy. Although the KSA Ministry of Health currently advises against travel to Hajj for pregnant women or children, these groups should receive meningococcal vaccination according to licensed indications for their age if they travel.

Low-grade fevers and local reactions, such as injection-site pain, arm swelling, and pain that limits movement of the injected arm, are side effects seen after MenACWY vaccine. Symptoms are generally mild to moderate and resolve within 48–72 hours. Severe adverse events, such as high fever, chills, joint pain, rash, or seizures are rare (<5% of vaccinees).

Although no clinical trials of meningococcal vaccines have been conducted in pregnant or lactating women, postlicensure safety data have not identified any serious safety concerns to the mother or fetus. Pregnancy or lactation should not preclude vaccination with MenACWY if indicated.

People with moderate or severe acute illness should defer vaccination until their condition improves. Vaccination is contraindicated for people who have a severe allergic reaction to any component of the vaccines. All meningococcal vaccines are inactivated and may be given to immunosuppressed people.

Sarah A. Mbaeyi, Lucy A. McNamara