Home to more than 29 million people, Nepal stretches for 500 miles (805 km) along the Himalayan mountains that provide the natural border between it and China (see Map 10-14). The topography rises from low plains (elevation 200 ft; 70 m) to the highest point in the world at 29,029 ft (8,848 m), the summit of Mount Everest. Approximately 30% of tourists come to Nepal to trek into the mountains, while others come to experience the culture and stunning natural beauty. Kathmandu, the capital city with a population of more than 2 million people, sits in a lush valley at 4,344 ft (1,324 m) elevation.

Nepal’s latitude of 28°N (the same as Florida) means that its nonmountainous areas are temperate year-round. Most annual rainfall comes during the monsoon season (June through September). The main tourist seasons are the spring (March to May) and fall (October and November). The winter months, December through February, are pleasant in the lowlands but can be too cold to make trekking enjoyable in the high mountains. 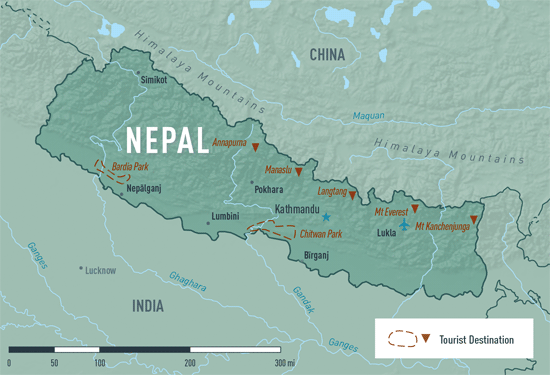 In April 2015, a major earthquake caused extensive damage and killed more than 9,000 people. Most of the damage occurred in nontourist areas, and the infrastructure for tourists has largely been repaired. The Mount Everest region east of Kathmandu and the Annapurna region to the west are the destination for most trekkers. The Langtang trekking area, north of Kathmandu, was virtually destroyed by a major landslide caused by the 2015 earthquake; since then, many services have been rebuilt and tourism is returning to the area. The high point of the Langtang region is 14,000 ft (4,267 m).

Trekkers into the Mount Everest region routinely sleep at elevations of 14,000–16,000 ft (4,267–4,876 m) and hike to elevations >18,000 ft (5,486 m). This prolonged exposure to very high elevations means that tourists must be knowledgeable about the risks of altitude illness and may need to carry specific medications to prevent and treat the problem (see Chapter 3, High-Altitude Travel & Altitude Illness). Most trekkers into the Mount Everest region arrive there by flying to a tiny airstrip at Lukla at 9,383 ft (2,860 m). The following day they reach Namche Bazaar at 11,290 ft (3,440 m). Acetazolamide prophylaxis can substantially decrease the chances of developing acute mountain sickness in Namche.

In the Annapurna region, short-term trekkers may choose to hike to viewpoints in the foothills without reaching any high elevations. Others may undertake a longer trek around the Annapurna massif, going over a 17,769 ft (5,416 m) pass (the Thorung La). Roads have been constructed up the 2 major valleys of this trek, shortening the overall trekking distance and changing the nature of the experience (buses, cars, and motorcycles may be encountered along the trek). However, new trails under development will allow trekkers to be off the roads for much of the way. The total exposure to high elevations is less in this region than in the Everest region. In recent years, trekkers have begun traveling to the Manaslu area, which offers a trekking experience with less-developed lodges and an extended time away from roads. Notable in this area is the Nubri Valley, with many sacred Buddhist sites.

In addition to trekking, Nepal has some of the best rafting and kayaking rivers in the world. Jungle lodges in Chitwan National Park allow tourists to view a wide range of wildlife, including tigers, rhinoceros, bears, and crocodiles, and a huge variety of exotic birds. For less adventurous travelers, it is possible to drive to comfortable hotels offering commanding views of the Himalayas, both near Kathmandu and near Pokhara.

Lumbini, in the Terai region of Nepal, is the birthplace of the Buddha. It has become an increasingly popular and beautifully developed pilgrimage destination for Buddhists from around the world. The airport near Lumbini is being upgraded to an international airport. Pokhara airport is also scheduled to become an international airport in the future, giving tourists more options for traveling in and out of Nepal.

Japanese encephalitis (JE) is endemic to Nepal; the highest disease risk is in the Terai region during and immediately after monsoon season (June through October). JE has been identified in local residents of the Kathmandu Valley, but only 1 case of JE acquired in Nepal has been reported in a foreigner, a tourist who spent time in the Terai in August. JE vaccine is not routinely recommended for travelers trekking in high-elevation areas or spending time in Kathmandu or Pokhara en route to such treks (see Chapter 4, Japanese Encephalitis). JE vaccination is recommended for foreigners living in Nepal.

Rabies is highly endemic to the dogs in Nepal, but in recent years there are fewer stray dogs in Kathmandu. Half of all tourist exposures to possibly rabid animals occur near Swayambunath, a beautiful hilltop shrine also known as the “monkey temple.” Advise tourists to be extra cautious with the dogs and monkeys here. Monkeys can be aggressive if approached and will jump on a person’s back if they smell food in a backpack. Clinics in Kathmandu specializing in the care of foreigners almost always have complete postexposure rabies prophylaxis, including human rabies immune globulin (see Chapter 4, Rabies). Trekkers bitten in the mountains should be able to return to Kathmandu within an average of 5 days.

Malaria is not a risk for most travelers to Nepal. There is no transmission of malaria in Kathmandu, and all the main trekking routes in Nepal are free of malaria transmission. Chitwan National Park is a popular tourist destination for wildlife viewing in the Terai. Although the Nepalese Ministry of Health and other regional organizations regard the Terai to be a malaria transmission area, this author, in 30 years of treating travelers in Nepal, has not seen a single case of malaria in a traveler to Chitwan, including foreign workers living in the park. Nepal has been targeted for the complete elimination of malaria within the next 10 years.

Cyclospora cayetanensis , an intestinal protozoal pathogen, is highly endemic to Nepal (see Chapter 4, Cyclosporiasis). Risk for infection is distinctly seasonal: transmission occurs almost exclusively from May through October, with a peak in June and July. Because this is outside the main tourist seasons, the primary effect is on expatriates who stay through the monsoon. In addition to watery diarrhea, profound anorexia and fatigue are the hallmark symptoms of Cyclospora infection. The treatment of choice is trimethoprim-sulfamethoxazole; no highly effective alternatives have been identified.

Travelers’ diarrhea is a risk, and the risk in the spring trekking season (March through May) is double that in the fall trekking season (October and November). Since many tourists are heading to remote areas that do not have medical care available, they should be provided with medications for self-treatment (see Chapter 2, Travelers’ Diarrhea). Extensive resistance to fluoroquinolones has been documented among bacterial diarrheal pathogens in Nepal, and moderate to severe diarrhea should be empirically treated with azithromycin. Hepatitis E virus is endemic to Nepal, and several cases each year are diagnosed in tourists or expatriates. There is no vaccine commercially available against hepatitis E.

Viral upper respiratory infections are extremely common, and the percentage of these that lead to bacterial sinusitis or bronchitis is high. Trekkers should consider carrying an antibiotic such as azithromycin to empirically treat a respiratory infection that lasts >7 days with no sign of improvement.

Helicopter evacuation from most areas is readily available. Communication has improved from remote areas because of satellite and cellular telephones, and private helicopter companies accept credit cards and are eager to perform evacuations for profit. Evacuation can often take place on the same day as the request, weather permitting. Helicopter rescue is usually limited to morning hours because of afternoon winds in the mountains. Helicopter rescue is billed at $4,000 per hour, with an average total cost of $8,000 to $10,000.

New hospitals—being built at a rapid pace in Kathmandu—are competing for foreign patients. Overall, hospital facilities have improved steadily over the years; acute cardiac care, general surgery, and orthopedic surgery are all reliable and available in Kathmandu. The closest evacuation point for definitive care is Bangkok. Advise travelers of reliable sources of medical care in Nepal before their departure; clinics specializing in the care of foreigners can be found on the International Society of Travel Medicine website (www.istm.org).

The political situation in Nepal has been in transition since 1990, when a mainly peaceful democratic revolution led to a multiparty parliamentary system under a constitutional monarch. Frustration with the rate of progress in rural areas led to a Maoist insurrection and 10 years of low-grade but violent civil war. A peace agreement was reached and the monarchy abolished in 2008. In 2017, the country was divided into 7 provinces, each with its own recognized local government. During election times, tourist schedules can be disrupted by demonstrations and strikes, but none of the political tension has been aimed at foreigners; Nepal remains a safe destination to visit. Visitors should, however, monitor the political situation while planning their journey.