Hajj and Umrah are religious pilgrimages to Mecca, Saudi Arabia. Islamic religious doctrine dictates that every able-bodied adult Muslim who can afford to do so is obligated to make Hajj at least once in his or her lifetime. Hajj takes place from the 8th through the 12th day of the last month of the Islamic year (Dhul Hijah). The timing of Hajj (based on the lunar Islamic calendar) varies with respect to the Gregorian calendar, occurring about 11 days earlier each successive year (for example, it was held August 19–24 in 2018 and in 2019, August 9–14). Muslims may perform Umrah, the “minor pilgrimage,” any time of the year; unlike Hajj, Umrah is not compulsory.

Approximately 2 million Muslims from >183 countries make Hajj each year and the Kingdom of Saudi Arabia (KSA) continues its efforts to allow for an even greater number of pilgrims. Annually, over 11,000 pilgrims travel from the United States. Most international pilgrims fly into Jeddah or Medina and take a bus to Mecca. Pilgrims then travel by foot or by bus approximately 5 miles (8 km) to the tent city of Mina, the largest temporary city in the world, where most pilgrims stay in air-conditioned tents.

At dawn on the ninth day of Dhul Hijah, pilgrims begin a nearly 9 mile (14.4 km) trip (by foot, by bus or by train) to the Plain of Arafat (Map 10-2). During the summer months, in particular, daytime temperatures can reach 122°F (50°C). Though the route features mist sprinklers, the risk of heat-related illnesses is high, and ambulances and medical stations along the route provide needed medical assistance. Hajj climaxes on the Plain of Arafat, a few miles east of Mecca. Pilgrims spend the day in supplication, praying and reading the Quran. Being on Arafat on the ninth of Dhul Hijah, even if only for a few moments, is an absolute rite of Hajj. Any hajji who fails to reach the Plain of Arafat on that day must repeat his or her pilgrimage. After sunset, pilgrims begin a 5.5 mile (9 km) journey to Muzdalifah, where most sleep in the open air. Potential threats to health there include thick dust, inadequate and overcrowded washing and sanitation facilities, and the possibility of separation or becoming lost.

At sunrise on the 10th, pilgrims collect small pebbles to carry to Jamaraat, the site of multiple deadly crowd crush disasters. At Jamaraat, hajjis throw 7 tiny pebbles at the largest of 3 white pillars—the stoning of the effigy of the Devil. Afterwards, it is traditional for pilgrims to sacrifice an animal. Some purchase vouchers to have licensed abattoirs perform this ritual on their behalf, thereby limiting their potential exposure to zoonotic diseases. Others may visit farms where they sacrifice an animal themselves or have it done by an appointed representative.

The next morning, hajjis go to the Grand Mosque, which houses the Ka’aba (“The Cube”), which Muslims consider the house of God. Pilgrims perform tawaf , 7 complete counterclockwise circuits around the Ka’aba. Because each floor of the 3-level mosque can hold 750,000 people, performing tawaf can take hours. In addition to tawaf , pilgrims may perform sa’i , walking (sometimes running) 7 times between the hills of Safa and Marwah, then drinking water from the Well of Zamzam. Hajjis may travel between Safa and Marwah via air-conditioned tunnels, with separate sections for walkers, runners, and disabled pilgrims. At the end of the day, pilgrims return to Mina (via Jamaraat) pelting all 3 pillars with pebbles along the way. 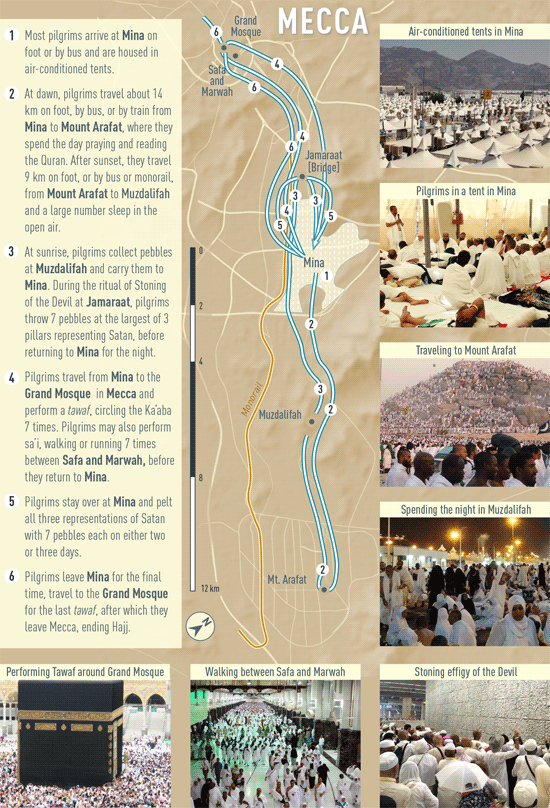 The following day, after performing a final tawaf , pilgrims leave Mecca, ending their Hajj. Although not required, hajjis may add a trip to Medina where they visit the Mosque of the Prophet, home to the tomb of Mohammed.

Travelers who become ill during Hajj have access to medical facilities strategically located in and around the holy sites. With an estimated 25,000 health care workers in attendance, medical services are offered free of charge to all pilgrims. For safety reasons, the KSA advises the elderly, the seriously ill, pregnant women, and children to postpone Hajj and Umrah. KSA may also choose to limit issuance of visas to travelers from countries experiencing infectious disease outbreaks. In 2012, for example, KSA did not permit anyone from Uganda to attend Hajj due to an Ebola outbreak in that country; the same restriction applied to Liberia, Guinea, and Sierra Leone in 2015.

The Saudi Arabian Ministry of Hajj (http://haj.gov.sa/english/pages/default.aspx) regularly updates vaccine requirements on its website; refer to this source for additional information. Current Hajj vaccination requirements are also available from these sources

KSA requires proof of vaccination as part of the Hajj and Umrah visa application process. Required vaccines include meningitis (see below) and—for anyone arriving from a yellow fever–endemic country—yellow fever. CDC recommends all travelers to Saudi Arabia be up-to-date with routine immunizations, including hepatitis A vaccine for most travelers. Hepatitis B vaccination is recommended for health care workers or other caretakers participating in Hajj.

Although KSA’s requirement for polio vaccine does not include adult pilgrims from the United States, it is best to ensure full vaccination before travel. All pilgrims traveling from countries where polio is reported are required to show proof of vaccination at least 4 weeks prior to departure. KSA also administers a single dose of the oral polio vaccine to pilgrims coming from countries where polio has been reported; this in addition to any polio vaccine received in a hajji’s country of origin. About 500,000 doses of polio vaccine are given at ports of entry, representing >90% of eligible pilgrims.

All pilgrims must have received a single dose of quadrivalent ACWY vaccine and show proof of vaccination on a valid International Certificate of Vaccination or Prophylaxis; KSA will not issue visas for Hajj or Umrah without it. Hajjis must receive their meningococcal conjugate vaccination no more than 5 years before arrival. The KSA Ministry of Health currently advises against travel to the Hajj for pregnant women or children; if they choose to travel, however, these groups should receive meningococcal vaccination according to licensed indications for their age. For more details on meningococcal disease and its prevention, see Chapter 4, Meningococcal Disease.

Respiratory tract infections are common during Hajj, with pneumonia being among the most common causes of hospital admission. This risk underscores the need to follow recommendations from the Advisory Committee on Immunization Practices for pneumococcal conjugate and polysaccharide vaccines for pilgrims aged ≥65 years and for younger travelers with comorbidities.

Crowded conditions during Hajj (densities can reach 9 pilgrims per square meter) increase the probability of respiratory disease transmission, including tuberculosis and Middle East Respiratory Syndrome (MERS). Many pilgrims come from areas highly endemic for tuberculosis; some arrive for Hajj with active pulmonary disease. Educate pilgrims about this risk and instruct them to see their doctor if they develop symptoms of active tuberculosis.

MERS, caused by the MERS coronavirus, was identified first in Saudi Arabia in 2012. Domestic cases (in and around the Arabian Peninsula) and exported cases (including the United States) have ranged from mild to severe; approximately 40% of reported cases have been fatal. The role of animal-to-human transmission is unclear, but the virus has been isolated in camels in this region. More information is available in Chapter 4, Middle East Respiratory Syndrome (MERS). At the time of writing, there have been no reports of Hajj-associated cases of MERS.

Diarrheal disease is common during Hajj; a pretravel consultation with travelers should include discussions about prevention, oral rehydration strategies, proper use of antimotility agents, and self-treatment of travelers’ diarrhea (TD) with antibiotics. Most TD in hajjis is bacterial (up to 83%), with smaller proportions due to viruses and parasites. More information can be found in Chapter 2, Travelers’ Diarrhea.

Chafing caused by long periods of standing and walking in the heat can lead to fungal or bacterial skin infections. Clothing should be light, not restrictive, and changed often to maintain hygiene. Advise travelers to keep skin dry, use talcum powder, and to be aware of any pain or irritation caused by garments. Open sores and blisters should be disinfected and kept covered. As a sign of respect, pilgrims enter the Grand Mosque with bare feet; careful foot protection is therefore essential, especially in diabetics who are at increased risk of infection.

Aedes and Anopheles mosquitoes, vectors for dengue and malaria, respectively, are present in Saudi Arabia. Mosquito bite prevention measures are outlined in Chapter 3, Mosquitoes, Ticks & Other Arthropods. Dengue has been documented in Mecca but not during Hajj. Intensive insecticide spraying campaigns are undertaken before Hajj, and the housing units of pilgrims arriving from endemic areas are especially targeted before their arrival. Prophylaxis against malaria is not required.

Noninfectious Health Threats and Other Hazards

Hajj is arduous even for young, healthy pilgrims. Because many Muslims wait until they are older before making Hajj, they are more likely to have chronic health conditions; travelers caught up in the experience of Hajj or Umrah may forget to take their usual medications. People with chronic medical conditions should undergo a functional assessment before leaving for Hajj. Medical providers should tailor a plan for each traveler’s unique risks including adjusting the usual medical regimen (if necessary), ensuring an adequate supply of medications, and providing education about symptoms that indicate a condition requiring urgent attention.

Diabetic pilgrims, in particular, should have a customized management plan that will enable them to meet the arduous physical challenges of the Hajj. Adequate amounts of all medications, plus syringes and needles, are a must. Diabetic travelers also need to carry with them on their pilgrimage an emergency kit that includes easily accessible carbohydrate sources, glucagon, a glucometer and test strips, urine ketone sticks to evaluate for ketoacidosis, and a list of medications and care plans. Durable and protective footwear is necessary to reduce the incidence of minor foot trauma that can lead to infections.

Heat is a threat to the health and well-being of all travelers, with both heat exhaustion and heatstroke causing incapacitation and death among pilgrims (see Chapter 3, Extremes of Temperature). Travelers are at risk particularly when Hajj occurs during summer months, when the average high temperatures between June and September are ≥110°F. High temperatures together with high humidity can lead to a heat index indicative of an extreme heat warning. High heat alone can exacerbate chronic conditions.

About 45% of pilgrims walk during the Hajj rituals, averaging 23.9 km over 5 days. Counsel pilgrims to stay well hydrated, wear sunscreen, and seek shade or use umbrellas when possible. Religious leaders have ruled that it is permissible for hajjis to perform some rituals after dark. In addition, except for a pilgrim’s required presence on Arafat on the ninth, most other compulsory rituals can be postponed, done by proxy, or redeemed by paying a penalty.

Fire is a potential risk during Hajj. In 1997, open stoves set tents on fire, and the resulting blaze killed 343 pilgrims and injured more than 1,500. Since then, KSA no longer allows pilgrims to erect their own lodgings or prepare their own food; permanent fiberglass structures have replaced formerly makeshift accommodations. In 2015, a hotel caught fire; more than 1,000 pilgrims were evacuated.

Trauma is a major cause of injury and death during Hajj. Hajj is associated with dense crowding, leading to crush disasters or stampedes. Thousands of pilgrims were killed during a crush at Mina in 2015, making it the deadliest Hajj disaster on record. Death usually results from asphyxiation or head trauma, and large crowds limit the movement of emergency medical services, making prompt rescue and treatment difficult.

As in other countries, motor vehicle crashes are the primary risk for US travelers overseas; remind Hajj pilgrims of the importance of seatbelt use (see Chapter 8, Road & Traffic Safety). Encourage pilgrims to be mindful of their own safety as they walk long distances through or near dense traffic.

Muslim law prohibits menstruating women from performing tawaf . All other rituals are independent of menses. Because pilgrims generally know well in advance that they will be making Hajj/Umrah, a woman should consult with her physician 2–3 months before the journey if she intends to manipulate her periods before the pilgrimage.