South Africa has been called “a world in one country.” The epithet refers, in part, to the diversity in the geography, which includes lush subtropical regions, old hardwood forests, sweeping Highveld vistas, and the deep desert of the Kalahari; the splendor of the animal species found throughout the country and protected in expansive game reserves; the diverse origins of the locals (from Africa, Europe, India, and Southeast Asia); the cultural, artistic, and culinary variety; and access to the conveniences of a developed infrastructure amid the challenges of Africa.

South Africa has experienced a surge in tourism in the past 2 decades, with visitors from within the African continent as well as those from Europe and North America. Business travelers typically head to the commercial centers of Johannesburg, Cape Town, and Durban. Tourists may be attracted by the game reserves, the largest of which is Kruger National Park, located along the Mozambique border in the northeast (see Map 4-3). Kwa-Zulu Natal has a number of game parks (Hluhluwe-Umfolozi and Saint Lucia) set inland from Durban, and the Eastern Cape has parks (Addo Elephant Park and Shamwari) easily accessed from Port Elizabeth on the southern coast. Many smaller luxury reserves have emerged to cater to the high-end traveler. Visitors may be attracted to itineraries that include a trip from Cape Town along the south coast through the small scenic towns of Knysna and Plettenberg Bay; a tour of the old gold-mining towns in Mpumalanga, many of which are in near-original condition; spectacular drives and fascinating tours of the old wineries along the wine routes in the Western Cape; or visits to the southernmost point of Africa at Cape Agulhas or Cape Point, where the Indian and Atlantic Oceans meet in a roar of foam. 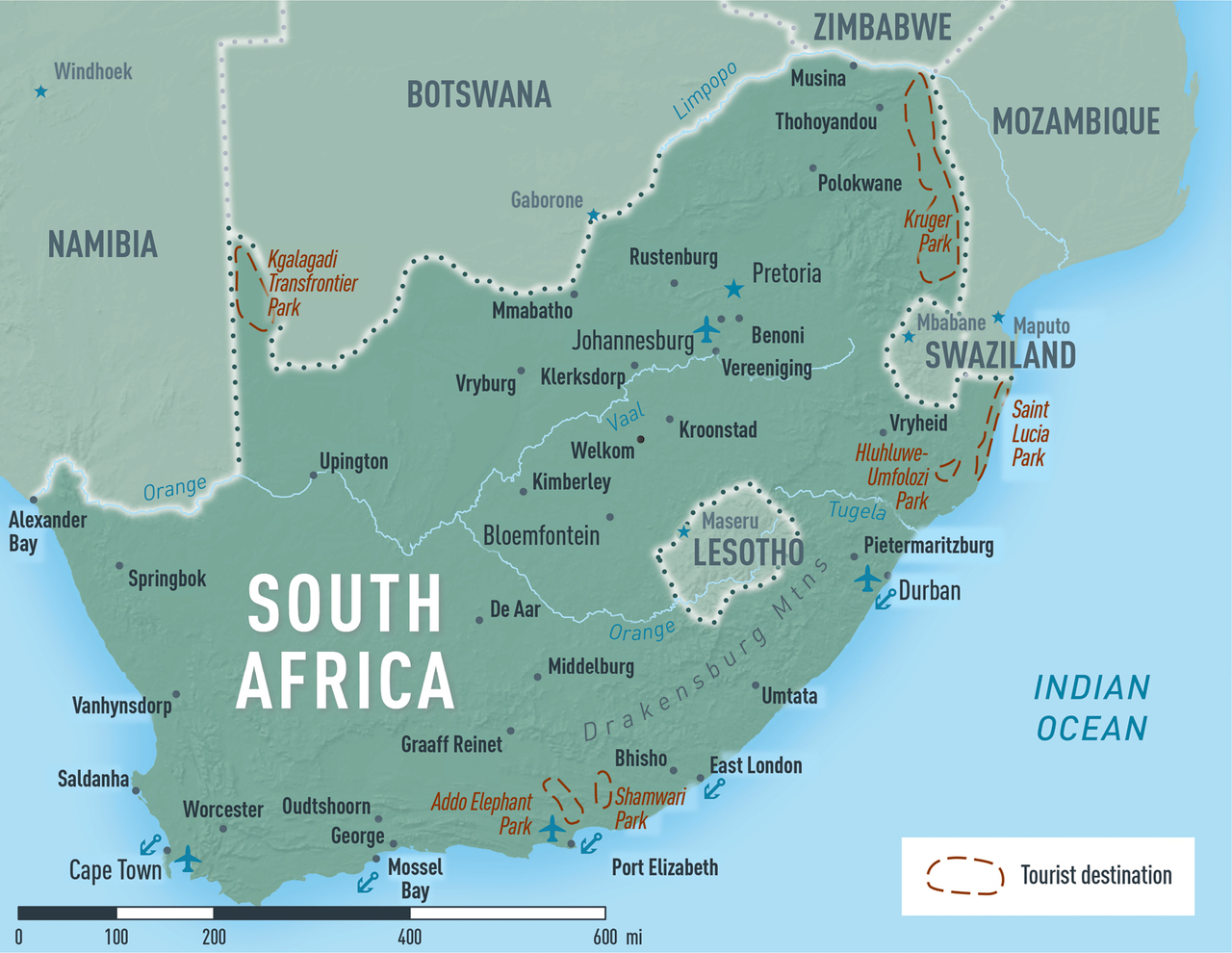 South Africa is also a common destination for humanitarian workers, missionaries, and students. A sizable number of South Africans live outside the country and would be considered VFR travelers (visiting friends and relatives) when returning to the country for a visit (see Chapter 8, Immigrants Returning Home to Visit Friends & Relatives).

While there is a wide range of living standards in South Africa, most visitors experience standards comparable to those in developed countries. A smaller number of visitors may go to less developed areas, either the lower-income townships outside most towns and cities or to rural areas. Hikers, adventure-seekers, and missionaries will experience a wider range of living standards. Similarly, the quality and availability of health care are variable. Middle- and upper-income South Africans live in low-risk environments, have a standard of health comparable to that of North Americans, and have access to world-class medical facilities. Poorer South Africans live in areas with few amenities, are exposed to a wide range of diseases, and have limited access to adequate health care.

All travelers to South Africa should be up-to-date with their routine vaccinations. Infectious diseases such as measles and mumps are endemic in the region. In addition, hepatitis A vaccine is recommended for most travelers, and hepatitis B vaccine is recommended for travelers who might be exposed to blood or other body fluids, including through sexual contact. Travelers should also consider typhoid vaccine, especially those who are more adventuresome or staying in less sanitary surroundings.

South Africa requires a valid International Certificate of Vaccination or Prophylaxis (ICVP) documenting yellow fever vaccination ≥10 days before arrival in South Africa for all travelers aged ≥1 year who are traveling from or transiting for >12 hours through the airport of a country with risk of yellow fever virus transmission. Travelers not meeting this requirement can be refused entry to South Africa or be quarantined for up to 6 days. Unvaccinated travelers with a valid medical waiver should be allowed entry. South Africa considers an ICVP to be valid for life.

Travelers going to or transiting through South Africa are advised to seek the most current information by consulting the CDC Travelers’ Health website (www.cdc.gov/travel), and also the website of the US embassy in South Africa (Pretoria) and the embassy of South Africa in Washington, DC.

South Africa has the largest estimated number of people living with HIV of any country in the world. The prevalence of HIV infection is approximately 19% among people aged 15–49 years, and the prevalence among sex workers is even higher. Other sexually transmitted diseases (STDs) are also present at high rates in this population. Travelers should be aware of STD risks and use condoms if they have sex with someone whose HIV or STD status is unknown.

Malaria transmission only occurs along the border with Zimbabwe and Mozambique, specifically in Vembe and Mopane district municipalities of Limpopo Province, Ehlanzeni district municipality in Mpumalanga Province, and Umkhanyakude in Kwazulu-Natal Province. This area includes Kruger National Park (see Map 3-38). Plasmodium falciparum is the predominant species and is universally resistant to chloroquine. Visitors to these areas should be on a malaria chemoprophylaxis regimen and should be advised to take mosquito precautions. Malaria in the northeastern game reserves occurs throughout the year but is seasonally variable; the highest transmission occurs from September through May, peaking from February to early May. The risk to visiting travelers is low. Preventing mosquito bites is the first line of defense against malaria. The South African Department of Health recommends malaria chemoprophylaxis for all travelers visiting malaria risk areas from September through May and mosquito-avoidance measures for the rest of the year. CDC recommends chemoprophylaxis at all times of the year (see Chapter 3, Yellow Fever & Malaria Information, by Country).

Tick-bite fever caused by rickettsial species is common in South Africa. The incidence rate for visitors from Europe is estimated to be 4%–5%. The disease is characterized by an eschar at the bite site, regional adenopathy, and a maculopapular to petechial rash. Hikers and campers in rural areas who are exposed to ticks are especially at risk. Measures should be taken to prevent tick bites (see Chapter 2, Protection against Mosquitoes, Ticks, & Other Arthropods). Travelers who are taking doxycycline for malaria chemoprophylaxis may have some protection against tick-bite fever, but no studies exist to support or refute this viewpoint. Taking doxycycline only as prophylaxis for tick-bite fever (as opposed to taking it for malaria chemoprophylaxis) is not recommended.

As with most destinations, the risk of travelers’ diarrhea depends on style of traveling and food choices. A fluoroquinolone, such as ciprofloxacin, can be considered for self-treatment of moderate to severe diarrhea.

Schistosomiasis, a common parasite throughout Africa, may be present in any body of freshwater, such as lakes, streams, and ponds. Travelers should avoid swimming in fresh, unchlorinated water.

Although most travelers avoid wild animals in game reserves, rabies is common in dogs and other mammals throughout the country. The KwaZulu-Natal Province has the highest incidence of rabies. Travelers have no way of telling if a given animal is rabid and should avoid all contact with animals. Any bite or scratch from an animal should be washed with soap and water immediately and be evaluated as soon as possible by a clinician. Postexposure prophylaxis and medical care for rabies exposures can be obtained in South Africa. Rabies vaccine is available throughout South Africa, and human rabies immune globulin is available in major urban medical centers.

South Africa has experienced a rise in violent crime, which includes armed robberies, carjackings, home invasions, and rape. Most of these incidents occur in lower income residential areas and, as such, most visitors will not be affected. However, awareness of personal safety and security should be stressed to all visitors. Travelers should rely on local guidance about the security precautions to take in specific areas.

Although South Africa has a modern road system, drivers should be alert for dangerous driving practices, stray animals, and poor roads in remote rural areas. Travelers should fasten seat belts when riding in cars and wear a helmet when riding bicycles or motorbikes.