Brazil is the fifth largest country in the world and the largest country in South America, occupying nearly half the land area of the continent. With a population of more than 200 million, Brazil has the world’s largest Portuguese-speaking population. Brazil has the world’s seventh largest economy and is classified as an upper-middle-income country. The population is highly urbanized, with 84% living in urban areas.

Tourism is an important part of the Brazilian economy, and Brazil is receiving an increasing number of international visitors. In 2011, more than 5 million international visitors traveled to Brazil. Brazil hosted the World Cup in 2014 and the Summer Olympic and Paralympic Games in 2016. Brazil’s beaches and natural areas are popular tourist destinations. Rio de Janeiro is Brazil’s second-largest city (with a population of >6 million) and most frequently visited tourist destination for its beaches, landmarks, and annual Carnival celebration. Many of Brazil’s major cities, including Salvador, Recife, Florianópolis, Fortaleza, and Natal, are tourist destinations for their beaches and regional culture. Brazil has a number of UNESCO World Heritage sites, including Iguaçu National Park in Paraná (the largest waterfalls in the Americas), historic towns of Olinda (Pernambuco), Ouro Preto (Minas Gerais), Salvador (Bahia) and Saõ Luis (Maranhão), the modern capital of Brasília, and natural areas of the Amazon forest, Pantanal Conservation Area (Mato Grosso and Mato Grosso do Sul), Atlantic forests (Rio de Janeiro and São Paulo), and the archipelago of Fernando de Noronha in the Atlantic Ocean (see Map 4-5). São Paulo, one of the world’s largest cities (>20 million people in the metropolitan area), is the economic center of Brazil and the most visited destination for business travel. 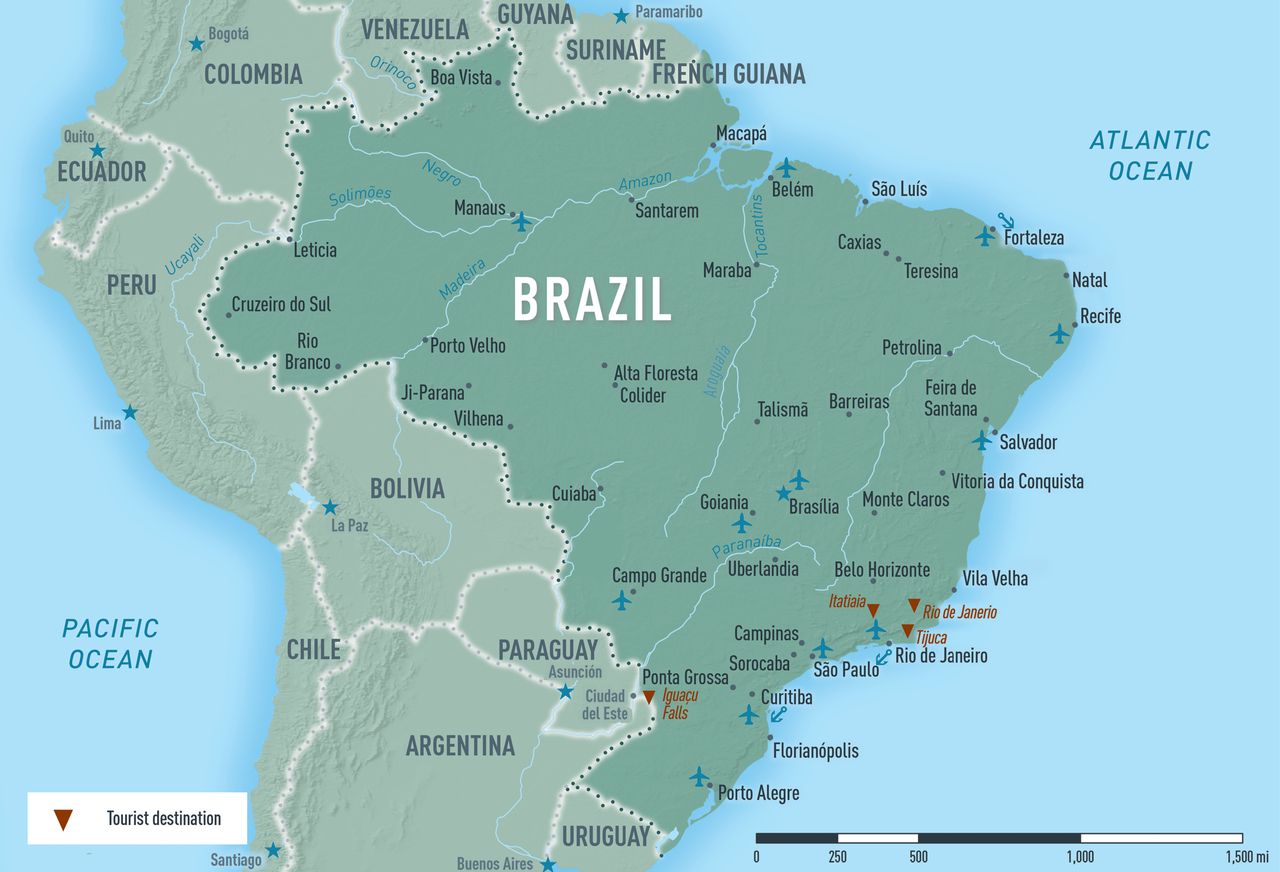 Travelers to Brazil should be up-to-date on routine vaccines. Hepatitis A vaccination is recommended. Hepatitis B vaccination should be considered for most travelers and is recommended for those who might be exposed to blood or other body fluids, including through sexual contact. Typhoid vaccine is recommended for most travelers, especially those more likely to be exposed to potentially contaminated food or water, such as those staying with friends or relatives; visiting smaller cities, villages, or rural areas; or prone to “adventurous eating.” Yellow fever vaccine is recommended for travelers to certain areas, and it is therefore critical that clinicians ask patients about their itineraries and potential travel within the country.

Travelers should take food and water precautions throughout Brazil (see Chapter 2, Food & Water Precautions). Travelers’ diarrhea is the most common travel-related ailment, and travelers who consume foods or beverages from street vendors, raw fruits or vegetables, or unpasteurized dairy products are at increased risk for foodborne infections. Oral rehydration salts are available from public health clinics and in almost all pharmacies in Brazil. Clinicians may wish to prescribe an antibiotic for self-treatment of moderate to severe diarrhea (see Chapter 2, Travelers’ Diarrhea).

Vectorborne diseases, including mosquitoborne diseases, are present in many areas in Brazil; these infections are the leading causes of febrile illness among travelers returning from South America. Chikungunya, dengue, and Zika are all transmitted by Aedes mosquitoes, and risk is considered high in many Brazilian states because of high indices of Aedes infestation. Some of these vectorborne diseases are new to Brazil: chikungunya was first detected in Brazil in 2014, and Zika was first detected in Brazil in 2015.

From 2000 through 2010, cases of dengue increased throughout Brazil, and epidemics were reported from large Brazilian cities, including Rio de Janeiro and Salvador. In 2015, Brazil recorded 1.6 million probable cases of dengue and approximately 21,000 cases of chikungunya. Travelers to Brazil should take measures to protect themselves from mosquito bites (see Chapter 2, Protection against Mosquitoes, Ticks, & Other Arthropods). Because of the risks associated with Zika virus infection during pregnancy, travelers should consult the CDC Travelers’ Health website (www.cdc.gov/travel) for the most current recommendations for Zika.

Almost all malaria in Brazil occurs in the Amazon Basin, although the mosquito vector is present in much of Brazil. Plasmodium vivax is the main species of malaria parasite, although approximately 15% of cases are caused by P. falciparum . Prophylactic treatment with antimalarial medication is recommended for travelers to malaria-endemic areas in Brazil (see Chapter 3, Yellow Fever & Malaria Information, by Country, and Map 3-21).

Yellow fever virus circulates in monkeys and is transmitted by mosquitoes throughout the Amazon Basin and in forested regions along all major river basins in Brazil, including Iguaçu Falls and as far south as Rio Grande do Sul. Vaccination against yellow fever is recommended for all travelers aged >9 months going to areas at risk of yellow fever. (See Chapter 3, Yellow Fever & Malaria Information, by Country, and Map 3-20.)

In Brazil, condoms are distributed free of charge by the government and are available in health clinics, tourist service centers, and other distribution points in many cities. Male condoms are available throughout Brazil in pharmacies, convenience stores, and large supermarkets; female condoms are also available in some locations. Travelers, particularly those at high risk for acquiring HIV infection (such as men who have sex with men), may consider discussing preexposure prophylaxis with their health care provider (www.cdc.gov/hiv/prep).

A number of fungal diseases endemic to parts of Brazil, including coccidioidomycosis, histoplasmosis, paracoccidioidomycosis, and cryptococcosis, are caused by inhalation of fungal spores typically present in soil, resulting in respiratory illness and occasionally more severe disease such as meningitis or bone infection. Travelers should exercise caution before disturbing soil, particularly if it is contaminated by bird or bat feces, and should beware of bat guano in caves.

Outbreaks of leptospirosis have occurred in urban areas in Brazil following heavy flooding. Travelers participating in recreational water activities are at increased risk, particularly after heavy rainfall or flooding.

Chagas’ disease has been eliminated in most Brazilian states through insecticide spraying. Although risk to travelers is extremely low, outbreaks associated with contaminated food or drink have been reported, including locally prepared juice containing açái, an Amazonian fruit eaten throughout Brazil. Travelers and ecotourists staying in poor-quality housing may be at higher risk.

Schistosomiasis is found in freshwater lakes and rivers in many states of Brazil, especially in the northeast. Swimming, bathing, and wading in fresh, unchlorinated water can result in infection. Schistosomiasis is not acquired by contact with saltwater (oceans or seas).

Both cutaneous and visceral leishmaniasis occur in Brazil and are most common in the Amazon and northeast regions. The risk is highest from dusk to dawn because sand flies typically feed (bite) at night and during twilight hours. Ecotourists and adventure travelers might have an increased risk, but even short-term travelers in endemic areas have developed leishmaniasis.

Tuberculosis is prevalent in Brazil, but short-term travelers are not considered at high risk for infection unless they will be spending time in specific crowded environments. Travelers who anticipate possible prolonged exposure to people with TB because they will routinely come into contact with clinic, hospital, prison, or homeless shelter populations should have a tuberculin skin test or TB blood test before leaving the United States. If the test is negative, the traveler should have a repeat test 8–10 weeks after returning from Brazil.

As in many foreign countries, motor vehicle accidents are among the leading causes of injury and death of US citizens in Brazil. Road conditions in Brazil differ significantly from those in the United States, and driving at night can be dangerous. The national toll-free number for emergency roadside assistance is 193 (in Portuguese only). It is illegal to drive after drinking alcohol, even in small quantities. Seat belt use is mandatory in vehicles, and children aged ≤10 years must be seated in the back seat. Brazilian federal law requires car seats for all children under the age of 7.5 years. Travelers with small children (weighing <40 lb) should travel with car or booster seats, since safety seats may be limited or unavailable. Helmets are required for motorcycles.

Travelers to Brazil should familiarize themselves with climatic conditions at their destinations before travel. Temperatures >104°F (40°C) are common from October through January in some Brazilian cities (see Chapter 2, Problems with Heat & Cold).

Poisonous snakes are hazards in many locations in Brazil, although deaths from snakebites are rare. Travelers should be advised to seek immediate medical attention any time a bite wound breaks the skin or when snake venom is ejected into the eyes. Specific antivenoms are available for some snakes in some areas of Brazil, so trying to ascertain the species of snake that bit the victim may be critical.

Although travel in Brazil is generally safe, crime remains a problem in urban areas and has increased in rural areas. The incidence of crime against tourists is higher in areas surrounding beaches, hotels, nightclubs, and other tourist destinations. Drug-related violence has resulted in violent clashes with police in tourist areas. Political demonstrations may disrupt public and private transportation. Department of State advisories should be monitored for alerts in areas where travelers plan to visit. Several Brazilian cities have established specialized tourist police units to patrol areas frequented by tourists.

Good health care is available in most sizable Brazilian cities. Brazilian public health services are free. Foreign visitors who have health problems can seek treatment in the emergency care network of Brazil’s public health system, known as the Unified Health System or by its acronym, SUS, or through private facilities. The toll-free emergency number for ambulance services throughout Brazil is 192. The website of the Brazilian Ministry of Health provides information for international visitors in English (http://portalsaude.saude.gov.br/index.php...), including a list of reference hospitals for mass events in Brazil.

Brazil has a growing number of private clinics that offer medical procedures using advanced technologies and cater to international clientele. Travel to Brazil for cosmetic surgery, assisted reproductive technology, or other elective medical procedures has increased in recent years (see Chapter 2, Medical Tourism) and is a major medical industry in Brazil. Although Brazil has many cosmetic surgery facilities that are on par with those found in the United States, the quality of care varies widely. Patients seeking to undergo cosmetic surgery or other elective procedures in Brazil should be advised to make sure that emergency medical facilities are available.