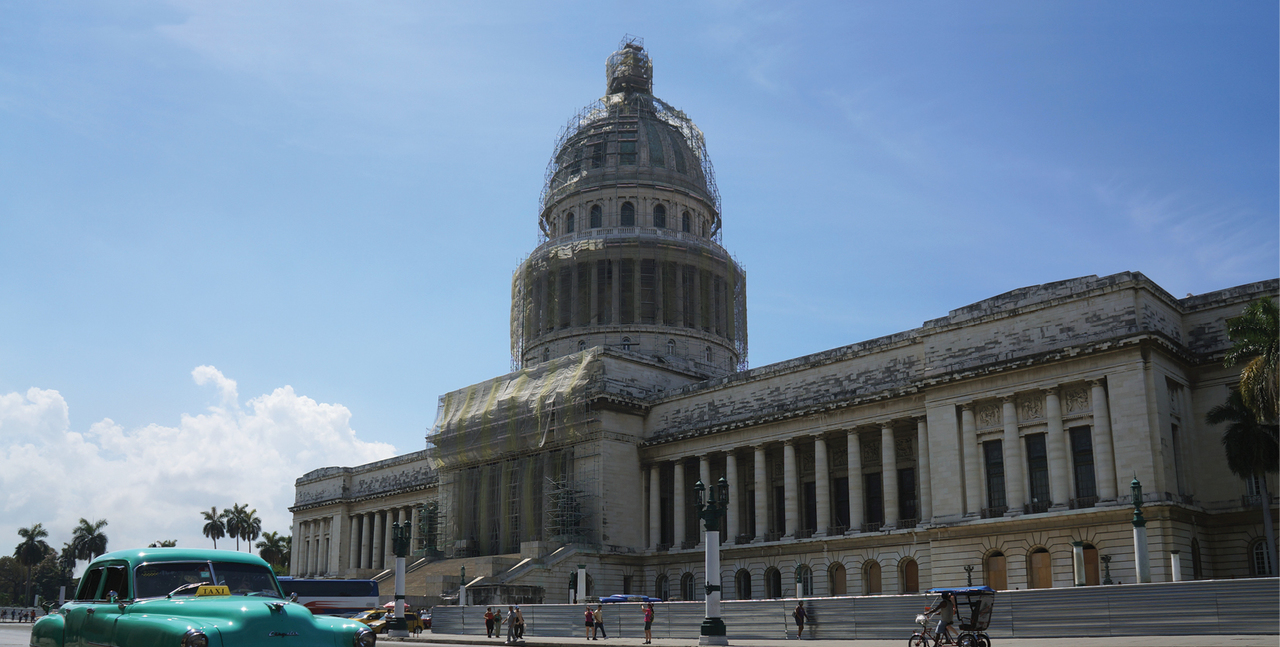 The Republic of Cuba is a Caribbean island located between the Caribbean Sea and the North Atlantic Ocean, approximately 90 miles (145 km) south of Key West, Florida. It is the largest country in the Caribbean and has a population of 11 million people. The official language is Spanish. The climate is tropical, with a dry season from November to April and a rainy season from May to October. Originally inhabited by a native Amerindian population, it was colonized by the Spanish in the 15th century. In 1898, Cuba gained independence from Spain, with the assistance of the United States, and then gained independence from the United States in 1902. In 1959, a revolutionary army under Fidel Castro overthrew the government and established a communist state. A US embargo has been in place since 1961; however, since December 2014, efforts have been made by the United States to reestablish diplomatic relations with Cuba. Although tourist travel to Cuba is still prohibited under US law, 12 categories of travel are now authorized, including family visits, professional research and meetings, and humanitarian projects.

Although out of reach of most US citizens for years, Cuba has long been a popular travel destination for Canadians and Europeans. The largest and most popular resort area is in Varadero, a peninsula with a vast, 13-mile stretch of sandy beach and more than 50 hotels. Those seeking to experience Cuban culture often travel to the nearby capital city of Havana to explore the streets of La Habana Vieja (Old Havana) or walk along the sea wall, the Malecon. Another popular destination is Trinidad, a colonial city known for its cobblestone streets (see Map 4-6). Throughout the country, tourists can enjoy the sight of vintage cars and sample Cuban cigars, rum, and mojitos. 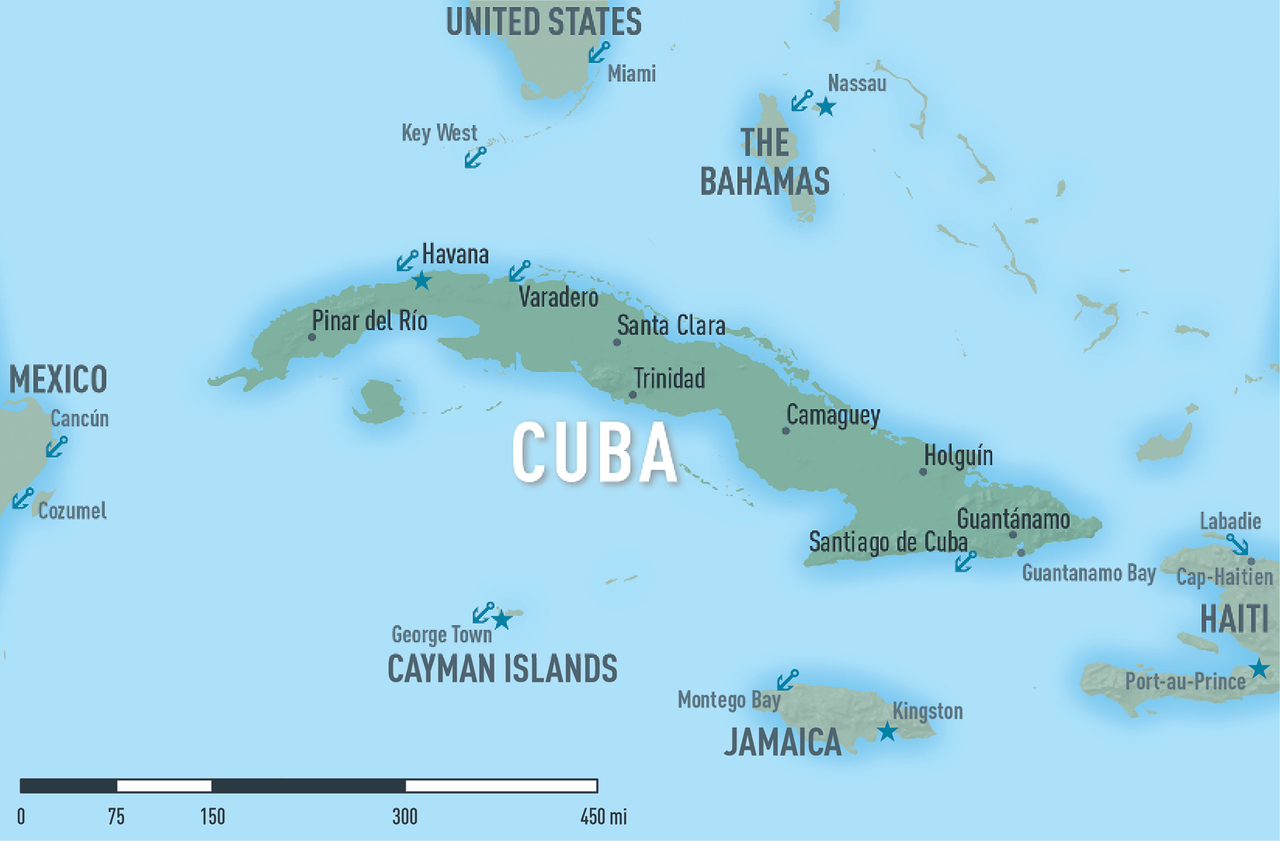 Travelers should confirm that routine vaccinations are up-to-date, including seasonal influenza vaccine. Hepatitis A vaccine is recommended for non-immune travelers. Vaccination against hepatitis B should also be considered for most travelers, especially those who may be exposed to blood or body fluids, including those intending to do medical work or those who may seek medical treatment, obtain tattoos or piercings, use injection drugs, or have sex. Typhoid vaccination is recommended for most travelers, especially visitors of friends and relatives, those traveling to rural areas, and those likely to partake in “adventurous eating.” Rabies vaccine is recommended for travelers who may be in contact with dogs, bats, or other mammals; travelers who expect to have occupational exposure to animals; and long-term travelers. Although extremely rare in travelers, cholera is a possible risk in parts of Cuba. Cholera vaccine is recommended for adult travelers visiting areas with cholera activity within the last year that are prone to recurrence of cholera epidemics.

Dengue is a risk in Cuba, and travelers should take precautions against mosquitoes, which include using insect repellents and wearing pants and long-sleeved shirts (see Chapter 2, Protection against Mosquitoes, Ticks, & Other Arthropods). Despite the large chikungunya outbreak that started in late 2013 and involved the entire region, Cuban authorities did not report any cases of local transmission. The first cases of local vectorborne Zika virus transmission were reported in Cuba in 2016, which emphasizes the need for mosquito precautions. Because of the risks to pregnancy, travelers should consult the CDC Travelers’ Health website for the most current recommendations for Zika.

Those traveling to Cuba are at risk of travelers’ diarrhea, even when staying at resorts. Travelers should be reminded to avoid raw or undercooked meat and seafood as well as unpasteurized dairy products. Salads and uncooked vegetables should be avoided, and fruit should only be eaten if washed in clean water or peeled by the traveler. Travelers should drink only bottled water or water that has been boiled, filtered, or treated. Consideration should also be given to prescribing an antibiotic for self-treatment of moderate to severe diarrhea, especially given the lack of easy accessibility of these drugs in Cuba. Cholera spread to Cuba in 2012 as a result of the outbreak in Haiti that began in 2010. There continue to be cases reported, including at least 65 in 2015. The risk to travelers is low; however, food and water precautions should be followed, and cholera vaccine may be considered. Ciguatera fish poisoning is found in tropical and subtropical areas surrounded by coral reefs and is known to occur in Cuba. Travelers should be advised to avoid or limit consumption of large reef fish, including their viscera, especially species such as grouper, snapper, barracuda, jack, sturgeon, sea bass, and moray eel.

Care should be taken to avoid excess sun exposure. Visitors should apply sunscreen of SPF ≥15 that protects against both UVA and UVB, wear protective clothing, and seek shade when possible. Travelers to the Caribbean are at risk of cutaneous larva migrans from lying or walking on soil, including sandy beaches. Risk can be minimized by wearing shoes and avoiding lying directly on sand. Marine envenomations by jellyfish, microscopic cnidarians causing sea bather’s eruption, sea urchins, and stingrays can occur in the warm shallow waters surrounding many resort areas.

Road conditions are often dangerous. The Carretera Central (main east-west highway) is in good condition but lacks lighting, and road signs are often inadequate or confusing. Travelers should avoid driving outside urban areas at night. Cars in Cuba are often old and may lack basic safety features such as reliable brakes and turn signals. Tourist company buses and radio-dispatched taxis are generally safe and reliable. Travelers should fasten seat belts when riding in cars and wear a helmet when riding bicycles or motorbikes. Unlicensed taxis and yellow 3-wheeled “coco taxis” should be avoided. Thefts may occur, especially in crowded locations such as beaches, markets, Old Town Havana, and the Prado neighborhood. These are usually nonviolent, but there is some concern that violent crime is increasing, and travelers should not resist if confronted.

Health care may not meet American standards. Medical professionals are generally well trained; however, medical supplies and certain medications may be unavailable. Travelers should bring adequate supplies of prescription and nonprescription medications. Personal hygiene products are also not as readily available as they are elsewhere in the Caribbean.